Batbarian: Testament of the Primordials Review

I cannot say that I’m terribly well-versed in the genre of gaming known as the Metroidvania, despite having played two major examples of it in the past year and a half, so when I picked up the review code for Batbarian: Testament of the Primordials, it was with a basic idea of what to expect but with no thoughts as to how a modern indie studio might mess with the genre conventions. Three weeks and a fair amount of cussing later, I can safely say that Batbarian proves to be significantly different from my experiences with Castlevania or Bloodstained, even as it is self-evidently cast from a similar mold.

There are three aspects to Batbarian that set it apart from previous games of my experience, and the first is the plot. The story is told in retrospect, as the titular barbarian and their pet bat Pip narrate their adventures through the ancient mountain ruins in which they found themselves after a mob of ogres kicked them over a cliff. As they explore, they learn more about the ruins, the cast of characters who have lived, died, or un-died within its depths, and the magical secrets that Pip hides inside his cutely fuzzy form. The narrative is fairly strong for a game of this genre, and Batbarian appears to have lost some of its potential for non-linearity and sequence-breaking as a trade-off, but it’s worth it for the strength of the writing and the characterizations. The barbarian is a strapping lad or lass in the traditional Conan/Conina mold: lacking in civility or tact, ever ready to smash in faces, suspicious of magic, but clever and articulate all the same. There is plenty of scripted banter, even in spots without any plot importance. Major points in the story, notably boss battles, also feature branching dialog options which, while not affecting the outcome in most cases, still provide variety and humor for the player to enjoy when they inevitably die and have to go through the scene once more. 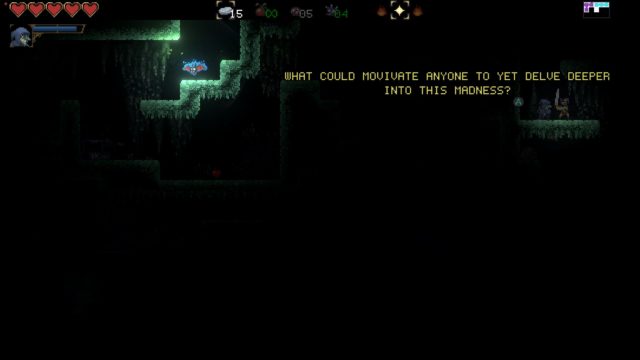 Fitting into the game’s narrative framing device, game overs during boss battles are often accompanied by snarky commentary, aspersions cast upon the barbarian’s storytelling skills, and a clue or two on how to beat the troublesome subject of discussion. There is plenty of reading material to discover, as well, whether it’s from the private libraries of sorcerers, hasty notes left for fellow explorers, or public notices for ogres on patrol. These do a lot to flesh out the details of what is essentially several centuries of background story.

The second aspect would be the puzzles. While there are enemies aplenty in this game, it’s not structured as (necessarily) a kill-’em-all action game. Those monsters have to die eventually, of course, but often they’re also integral to the central puzzle of a room, tripping switches or otherwise interacting with the scenery. Other times, the how of defeating them is the puzzle which must be solved. This puzzle-centric approach is supported by the secondary item system, where the player uses the righthand joystick to aim stones or fruit in ways that trip switches, stun enemies, or otherwise affect the room in odd ways.

Pip the bat starts the game with a luminous aura that can repel or even damage some monsters, activate crystals, or simply light the way in the darkest depths. The barbarian has a limitless supply of Pip’s favorite fruit, which can be chucked via right joystick to direct their batty buddy as needed, as well as a limited stock of sticky fruits and pungent fruits, each with their own uses. As the game progresses, Pip also gains fiery and frosty auras which enable him to affect some enemies or environmental hazards in new ways.

The third important aspect of Batbarian is the platforming, which dovetails with the puzzle elements to provide an experience which ranges from the challenging to the frustrating to the aggravating, dependent on personal tastes. From the get-go there are tricky jumps, nasty traps, and tight timers on switches — and it only gets more “fun” as the game progresses. Plenty of screens look nigh-impossible at first, only for a solution to become apparent through much trial and error. Other times, the barbarian will have to trip the switch and then run like hell while yelling “LEEEEROY JEEENKINS!” at the top of their voice, only to somehow survive whatever deathtrap they’ve just leapt into. 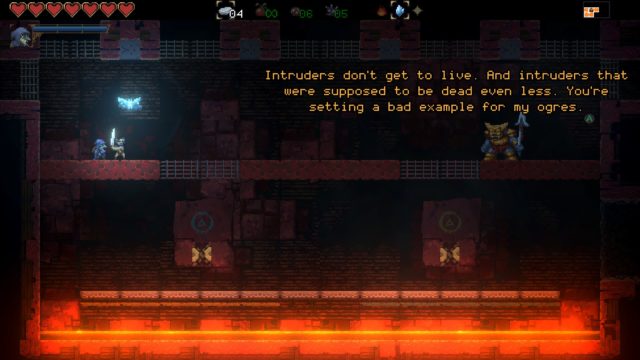 Be the bad example.

This continues even with the bosses, most of whom require more thought than simply memorizing the attack patterns. The barbarian and their bat must work together and with the environment in creative ways to allow damage to be dealt. In many cases, this can mean running, jumping, and tossing fruit or stones simultaneously, to land in the right spot to deliver a heavy blow with near-to-perfect timing.

Both graphically and musically, Batbarian hearkens back to earlier action titles. Its sprite graphics do a great job of showing the action with the barbarian, their companions, and the various monsters of the caves and ruins. While the bestiary isn’t the most expansive, its creatures have the variety necessary to play into the puzzle aspects of the game. However, the need to keep all rooms of the dungeon within a single screen each has dictated that the sprites in general are smaller and less detailed than they might otherwise be, and on the Switch’s main screen it feels a good deal like playing a GBA title. A remarkably good GBA title, to be sure, with color and lighting effects that the venerable handheld could never have dreamt of, but still a bit squinty for the eyes at first.

The music rocks out. For all its puzzles, Batbarian is also an action title, and the soundtrack supports that well. There are no real complaints to be had here, though one might be thankful that amidst all the other puzzle shenanigans, there aren’t any with sound-based cues.  The clackety sounds as people talk or walk around can get annoying, but they tend to get lost beneath the background music except in silent rooms.

Save points in the form of campsites are available at regular intervals, and the game also features an automatic checkpoint save. Some puzzle rooms even offer soft reset options to reduce the pain of inadvertently blocking progress by killing the wrong thing at the wrong time. All of this is very welcome. Batbarian was never intended to be an easy game, and some of its more optional puzzles — in particular one room that must be passed in order to get the C or A Endings — include some of the most hair-pulling puzzle-platformer design to be seen in a long time. The developers acknowledge this with a section of the Options menu labeled “Assists.” This menu allows the player to toggle bonuses for attack and defense, increase item drop rates, double the number of items gained by picking them up, and slowing the speed of the game while in targeting mode. The game does not necessarily inform the player of this menu, however, except obliquely in a post-mortem narration, and it may come as a relief to players after the first or second boss to realize that the game defaults to hard mode and that they can adjust it to be more favorable to them. But when it all comes together, regardless of whether or not the player was assisted, there’s sure to be a sense of accomplishment at overcoming particular challenges. 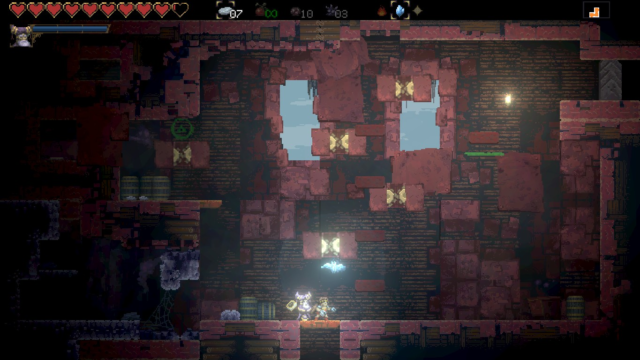 The control scheme on the Switch felt unwieldy at first, especially the part where one uses the right joystick for aiming and the button pad right below it for jumping, often simultaneously. The developers had the forethought to make the L1 shoulder button a secondary input for the jump command, however, which alleviates that one. The biggest control issue that I personally had with this title was not due to the game at all, but rather to the occasional bouts of motion-ghosting from my Switch controllers, which led to several embarrassing incidents where the barbarian walked straight off a cliff multiple times in a row. In a game with platforming as tight as this, even a little bugginess in the hardware is noticeable, so be forewarned.

Metroidvania has always been more of an action genre that occasionally intersects with the broader spectrum of the RPGestalt, but Batbarian falls within the edges of the role-playing genre. The barbarian’s health may be expressed as a series of hearts on screen, but it’s backed by specific numbers of hit points and an experience system to ensure that the total HP increases in a regular manner. Specifically, hit points are a function of the barbarian’s defense times the number of hearts they currently have. At level-up, the player gets three tries at a roulette wheel to determine which stats the barbarian gains: attack, defense, or awareness. This last one is what determines how far the barbarian can see in the dark without the light of his batty buddy, as well as how often enemies drop loot. It’s simple, but it supports its game well, and no other bells or whistles are really necessary for a magic-hating barbarian and his surprisingly magical pet.

Like I said, I went into this one blind. I had no idea what it was about or how difficult it would be, and Batbarian proved to be a welcome surprise on both counts. It felt like an adventure from beginning to end, and there’s no way to fault that. The level of challenge won’t be to everyone’s liking, but for those who do like this sort of thing, then Batbarian is a game that will give the player a run for their money. It’s hard, but never unfair, and it lures the player onward with an interesting plot and retro graphics. This one stands as an example of what a good indie developer can do with a classic game genre, breathing life into it and making it their own.