I Wish I Had An Angel

Stoic Studios’ Banner Saga series has been one of the roughest roller coasters I’ve ever had the (mis)fortune of boarding. I’d say pleasure, but the reality is that this series has constantly left me an emotional train wreck after each and every installment. There aren’t many games out there that do such a good job of emotionally tugging at your heartstrings the way this particular series does, and Banner Saga 3 is no exception.

Following the conclusion of Banner Saga 2, the third and final part of the trilogy begins with Alette or Rook stationed in Arberrang, which pushes humanity further and further west. The clans are in disarray, food and supplies have become scarce, and morale is at its lowest. Those trapped within the walls of Arberrang are unsure of what the outcome will be if the darkness is not repelled. Meanwhile, Juno, who helped buy time in the final battle of Banner Saga 2, is now a playable character. Juno’s team of miscreants recognize that the only way to remove the darkness is to go to the source. Juno’s team enters the belly of the beast, knowing full well that they may never return from this suicide mission into darkness.

Banner Saga 3′s story continues to keep players guessing as to who will live and who will die. The decisions are still nail-biting and uncomfortable, and the writing does an amazing job of keeping players on their toes in order to reach the ending. Situations continue to have massive repercussions, especially given that the stakes are much higher in this finale. Atmospherically, players are feeling the foreboding and discomfort, and constantly watching their comrades die. This game is all about finding hope where hopelessness is rampant, and Stoic continues to deliver on its emotional investment in storytelling and decision-making. 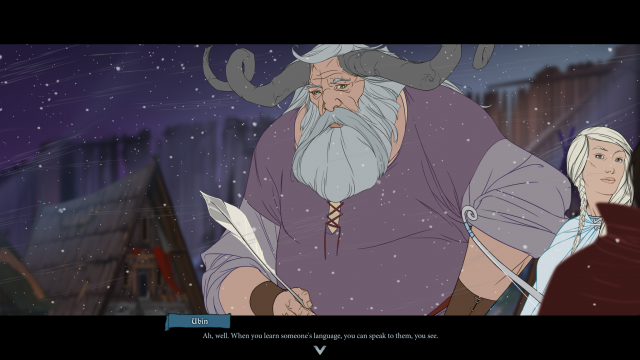 Ubin will continue to tell the young folk that in his day, the darkness knew when to “get off his lawn.”

One previous complaint I have had about this series was a lack of characterization. I found I cared about the characters, but didn’t quite feel as if I knew them personally. By this third episode, the characters felt far more fleshed out and my emotional investment towards them went up tenfold. As characters passed, it was much harder to let go of their deaths (and stats) given that death is a large part of the Banner Saga series. In terms of characterization, Banner Saga 3′s payoff was worth the wait.

In terms of gameplay, not much has changed in this installment. As days pass in the world, players will lose clansmen, morale, and supplies. These elements can be lost or gained based on player decisions, and unlike Banner Saga 2, there is only a brief window where players will be able to buy supplies and items due to a large disruption in the story. What is somewhat different for this direct sequel is that time feels like the biggest commodity, and it’s the easiest to lose. When morale is strong, it continues to provide bonuses in combat, just as when morale is poor, it makes violent encounters all the more deadly.

The majority of the tactical-based combat remains unchanged. Players continue making strategies on a tactical playing field, and each character class has its own unique skills that can manipulate the combat zone. Size of characters still play a factor for movement phases, and players can still boost their attacks or move extra spaces when using Willpower. More Willpower is obtained during combat when enemies are slain. Placement continues to be the most important aspect of combat in Banner Saga 3, as poor placement of a character can often forfeit the use of a special skill. Promoting character’s continues to be a very key element, as being able to beef their stats allows for better opportunities to survive devastating blows or potential one-hit encounters. Through promotion, characters can also gain heroic titles that also increase their stats and provide unique bonuses depending on what is chosen. These little touches are a nice addition to leveling up characters.

One of the new elements in Banner Saga 3, comes in the form of reinforcements. After completing a round of combat, reinforcements can now be called in, and players will have a brief moment to reconfigure their team in order to engage the new oncoming enemies. This moment also allows for players to remove their dead and replace them with fresh units or retreat. The downside to selecting reinforcements is there can be multiple influxes of enemy units, which can really dwindle a player’s core set of characters, especially if they’ve had a number of character deaths throughout the main story. This isn’t necessarily a bad thing, but depending on what difficulty a player is playing on, it can make battles feel lopsided. 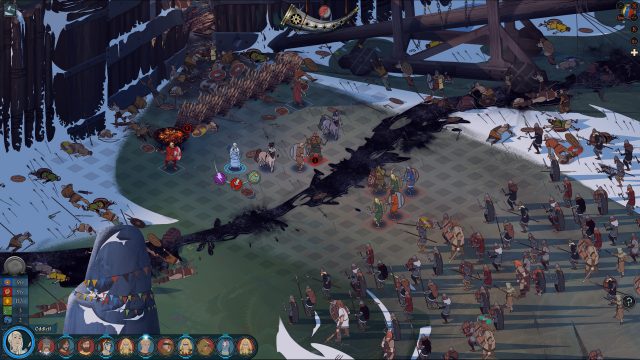 Some of the problems from the first two games still persist in terms of small text size or text being difficult to read on maps. Players still can’t rotate the map during combat, which is annoying given that it would offer more visibility to the tactical playfield and being able to zoom into the map is only so helpful during battles. However, much like the previous two games, these issues are not game-breaking, just minor nuisances.

The art direction of Banner Saga 3 still continues to shine through. The cutscene and combat animation is crisp and clear, while characters offer a nice variety of emotional expressions. The colour palettes of the characters and environments fit the overall tone of the game, and it looks stunning. The soundtrack continues to be a wonderful experience to listen to, and while there aren’t as many new tracks, the reuse of previous ones is not something to mind.

Banner Saga 3 is the magnum opus to this wonderful series, and every decision I made gutted me in ways that I will never forget. The emotional impact of this full journey hit so hard and felt so raw it was discomforting. Seeing my favourites being punished for my poor decisions left me so broken, but seeing who survived gave me hope. Banner Saga 3 is memorable, it’s horrific, and it will leave you emotionally distraught. If you’ve never played this series, but you love difficult choices and deep storytelling, then it’s one I would heartily recommend.