High atop a towering mansion, a young man prevents his insane father from casting the world into eternal darkness by sacrificing both their lives. Were this only the end of the genetic line, there wouldn’t have been a game at all. However, hundreds of years later a small vampire problem has cropped up and only those carrying the blood of the ill-fated family can stop the Underworld from invading in force. It’s cheesy, and it’s not ground breaking, but for a light game that isn’t meant to be serious Aveyond: The Lord of Twilight does the job. It’s a short, entertaining game that many older RPGamers will find quaintly nostalgic, and may give newer players some insight into what the genre was like many years ago.

Combat is a tried-and-true menu system that isn’t breaking any ground but also isn’t messing up trying to do anything fancy. Enemies are visible on the map; some are aggressive and will chase Mel without pause, while others are more laid back and will only attack if the player walks into them. At the start of each turn, the player chooses an action for each of their characters: attack, skill, item, or retreat. Each character’s skills are unique: only Mel (the main protagonist) can steal, while Te’ijal, a vampire helping Mel for her own reasons, can suck the blood from enemies, restoring her own health. Allies and enemies will all execute their attacks at the same time; while there isn’t a specific speed stat, the player will quickly come to gauge which characters in their party are faster. Like most traditional RPGs, each character should equip a weapon, shield, helmet, armour, and accessory before wading into battle.

The game’s visuals aren’t going to blow anyone away. They’re bright and colourful with a decent amount of detail, but minimal animation is telling in an age where graphics are approaching reality, even in fantasy titles. On the plus side, this does mean essentially any computer built in the last decade would be a likely candidate for installation, making it widely accessible. The music fits with the game’s retro feeling, working well with story high and low points, but while it fits well with the game, few will be humming along once the game is off. 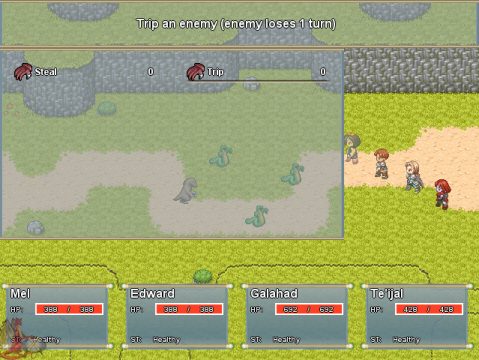 Though in general Lord of Twilight isn’t terribly difficult, those looking for a simpler or greater challenge can adjust the difficulty at the start of their adventures. Easy makes characters stronger and enemies weaker as well as offering a tutorial. Normal retains balance between the two, while Expert boasts 25% stronger enemies with 25% weaker characters in addition no longer having health and mana regenerate when a new level is reached. The time to completion thus hinges directly on this selection of difficulty. Those playing on Easy or Normal should have no difficulty finishing in under ten hours, including scouting for the five special hidden caves in the game. Choosing to dive into Expert will net the player another two to three hours of playtime due to the increased amount of combat required.

The script is well done, with no discernible grammatical or spelling errors. The interface is clean and easy to read, with minimal menus providing ample information, both necessary and flavourful. Like many aspects of the game, while it isn’t fancy or turning any heads, it provides a solid backbone with minimal fuss.

The game’s originality isn’t a subject with much depth and there’s very little original about the game. The combat system has been seen in dozens of games, but it remains tried-and-true without any “creative additions” dragging the gameplay down. Providing a player isn’t expecting a revolutionary experience, the lack of originality isn’t terribly disconcerting. 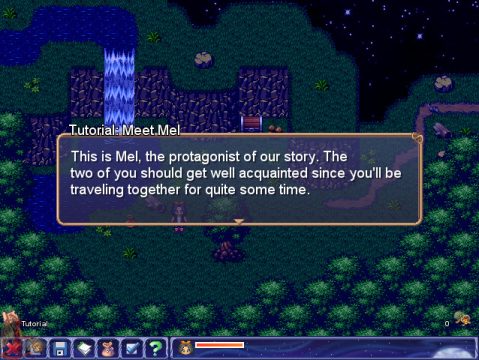 The story, though only half of it is available in this title, is a fun little jaunt that isn’t asking for or expecting great depth. As this is part of a multiple-game story arch, the tale does end somewhat abruptly after acquiring the first orb, but it also leaves the player looking forward to future adventures with Mel, her cousins, the vampires, and other amusing characters.

Lord of Twilight is a fun, short nostalgic game done in a very traditional JRPG style. It’s not breaking down any walls, nor is it doing anything new — but it isn’t trying to reach for either of those. What it does choose to approach, it does well; otherwise, it relies on the very tried and true. Those seeking a short, uncomplicated game that has some chuckle-worthy dialogue should definitely be picking up the title, and expect to purchase Aveyond: Gates of Night, Aveyond: The Lost Orb, and future chapters yet to be named and announced.