For the year 2014, I set myself a goal. I had twelve games with the Gust logo on them that I’d either never started, or never finished to my satisfaction. First and foremost among those was Atelier Marie: The Alchemist of Salburg. While it went on to found Gust’s premiere dynasty of flagship titles, this game was an odd duck when it was first released in 1997. The introductory narration plays on this, speaking of daring adventurers and great feats, only to break the news that this game wasn’t about them at all. It’s about the cute girl at the shop that always seems to have the best items.

Like almost every game in the series, Atelier Marie does not possess a central narrative at all. Instead, it has an origin event, a setting, a time limit, and a heaping helping of character interaction. The game takes place in Salburg, a pseudo-medieval kingdom which hosts an impressive school of alchemy. Marlone, Marie to her friends, was a student at that august institution, but a day or two before the game starts she flunks the final exam with the worst scores in its decades of history. Her mentor is able to arrange a second chance, however. Marie is loaned a workshop, an atelier to use the French term, and has five years to improve her skills through good, honest labor. During that time she’ll meet a range of characters to befriend, each with his or her own bit of story. While the focus on character scenes and short vignettes over a linear plot was normal for relationship simulators of the time, Marie is remarkable first for applying it to an RPG format and second for not including any romantic subtext at any point. Friendship is golden, but a working girl doesn’t have time for romance, it seems.

This turns a lot of the traditional RPG paradigm on its head. There are boss monsters, but they have no bearing on anything but a character’s side story or two, if that. There are eight recruitable characters, but no particular reason to choose one over the other beyond the player’s own preferences or desire to explore that bit of story. It’s about as free-form an experience as could be had on the PlayStation in those days. One downside of this is that it sort of drops the player in the deep end. The first few hours can be rough, as the jobs list at the pub will frequently have no doable requests posted, and Marie soon learns that young alchemists are not cut out for heavy duty monster bashing. The good bodyguards don’t come cheap, which is another drain on the bank account early on. As she learns new recipes and expands her knowledge base, these money issues disappear, but it can still be disheartening. 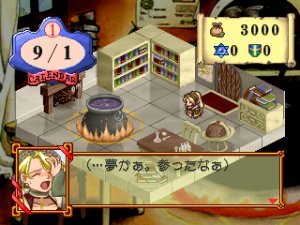 Work is such a headache.

Atelier Marie set the mold for gameplay in this series, but that certainly does not mean that Gust got it right on the first try. Points on the map are just that, points. Marie visits a spot and spends a day there. There is no exploration, or even an area to walk around. There is only the option to search and maybe find items or monsters to fight. Quite often the player can spend a day or two at a site and not find anything at all. Item acquisition can be very haphazard, even before factoring in the seasonality of some alchemy ingredients, so there will be times when Marie’s questing is foiled by the villainous machinations of the random number generator. The other main component of the game is the item creation. There is plenty for a young alchemist to make, but if menu options are anything to go by then Marie is not the most organized person in the kingdom. All items are listed under one of four elemental colors, be they ingredients or synthesized, which can be a headache if one is not well versed in reading Japanese. There are also a handful of ingredients which do not seem to have any use in the game, either as usable items or as alchemic reagents. Basically, it’s about as messy as Marie’s actual atelier in the game, without the occasional fairy coming by to sweep up.

Yes, there are fairies. These energetic half-pints are cute as a button and twice as useful, since they can gather items from anywhere Marie has visited, often in greater amounts, and can make any item that Marie has mastered. They can be hired for a monthly salary, which varies depending on their rank. The black cap fairies are the cheapest, but they only work at one-eighth the speed of their employer. Indigo cap fairies work just as fast as Marie, but require more cash to keep. Once the player has a good assembly line of fairy helpers gathering and producing, however, most financial worries are long past. And since the best use for fairies involves the mass production of explosives, most monsters won’t stand a chance by the end of the game, either.

Atelier Marie is not the most graphically adventurous of games, and most of the character sprites, battlefields, and locales are at best one step above the later SNES generations of games. Gust supplements this with tons of portrait and scene art by Kohime Ouse, which balances the graphics score more favorably. Most important is that the game’s visuals fit well together, with the sole exception of the five mini-games, which border on the 8-bit in their clunky simplicity. These mini-games pop up at specific points, usually related to finding or producing important items. One of them can be avoided with the purchase of a simple piece of lab equipment, but the rest must be tolerated as a necessary evil. They do provide something different, but that’s no consolation when they’re both boring and annoying to play. Few Atelier titles have bothered with mini-games since, and it’s not hard to see why. 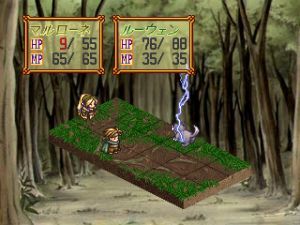 My, what big lightning bolts you have.

One area in which Atelier Marie stands out is in the audio department. Toshiharu Yamanish and Daisuke Achiwa put together a good soundtrack which, though not as compelling or as inventive as those of later series entries, contains the bounciness and playful cheer that characterizes the series. Marie also benefits from copious voice-acting, with a level of voice work that was rare for an early PSX or Saturn title to have.

Finally, there is the combat. It’s an easy enough facet of the game to overlook, as Atelier titles are rarely focused on their heroines’ fighting prowess. Battles seem to work on a variant of ATB, though the turn order list is hidden. Characters may get several hits in quickly, depending on their speed, or can use special attacks, which hit harder but have a slower recharge time. Items can be equipped to any party member while in town, and take MP to use. Surprisingly, characters have access to as many of an item as is currently in stock at Marie’s workshop. Combined with the fairy assembly line, this becomes particularly abusable late in the game.

While it was a very creative title for its time, Atelier Marie comes across as largely average in terms of gameplay, and even a little below average when it comes to story and presentation. It’s primarily notable for its legacy. There aren’t many game titles out there that can claim to define their niche of the RPGestalt the way Marie has, making it more influential than the sum of its parts would imply. It’s not surprising that it can, in one version or another, be played on the PlayStation, the Sega Saturn, the Dreamcast, the PlayStation 2, and as a downloadable PSOne classic. I would advise against the cellphone adaptation, however. Whatever else may be said of it, Marie founded a software dynasty that would go on to improve on its model and provide entertainment decades after its conception, and few games can lay claim to that.