PlatinumGames is not afraid to try new things, and has come in with brand new title in Astral Chain, an action game that gives players control of not one, but two, combatants at the same time. That’s certainly not the only idea Astral Chain brings to the table, however, as the developer once again manages to invoke its well regarded stylistic abilities to make it stand out audibly and visually as well on the gameplay front. Though there are some annoyances and weaknesses, in the end Astral Chain is a highly entertaining adventure with a lot to recommend it.

Astral Chain takes place in the year 2078, with humanity close to extinction after the invasion of extra-dimensional creatures called Chimeras. The remains of the populace are now housed in a mega-city on an artificial island called The Ark. It’s still not a fully safe heaven, however, as Chimeras cause damage to The Ark by invading through gates from their home in the Astral Plane, often kidnapping people and spreading corrupting Red Matter that causes people to turn into Chimeras. Players start the game choosing one of a pair of twin siblings — brother and sister — who are new recruits of Neuron, a special force within The Ark’s police that handles Chimera-related incidents. Neuron makes uses of Legions, Chimeras that have been turned to the side of humanity and are controlled with a psychic link and spiritual chain to their officer.

The game has a decent, albeit not a standout, cast. The twin that players control effectively takes the role of silent protagonist, while conversely the other twin becomes the character in the game that gets the most plot focus. Astral Chain isn’t afraid to be melodramatic in its events, particularly towards the end of the game. While the game reaches a somewhat satisfying conclusion, it leaves some major questions, such as the exact nature of the Astral Plane and Chimeras, wide open and fails to offer any critical examination or background to its antagonists’ motives. 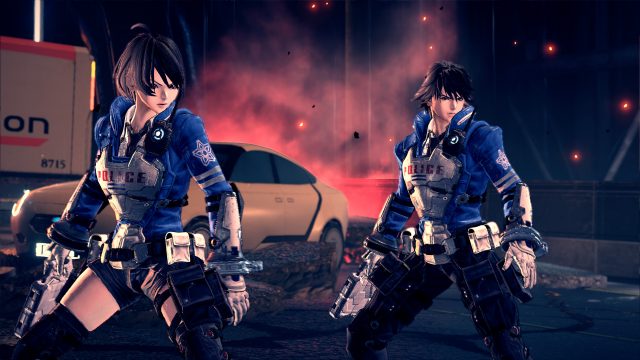 One of these becomes a silent protagonist, while the other gets most of the character-focused story elements. You choose which.

Astral Chain is divided into chapters called Files, which often begin at Neuron’s HQ and see players traveling to part of The Ark to investigate a particular case. The structure is generally linear, with there being one main case to resolve, but most of the Files have side or optional missions that can be undertaken in the process. There’s a mixture of corridor-style areas and more open commercial districts, but the biggest areas aren’t huge. The pacing is a bit mixed, but the game does a good job the couple of times it provides a welcome respite after some heavier events.

To solve cases, players are required to do a variety of takes, many involving at least one of the five Legions they pick up across the game. Though heavily involved in combat, the Legions also get plenty of use outside of it. For example, the Beast Legion can be used to track people or dig in rubble, while the Arm Legion can move heavy objects. Players also have access to the IRIS tool, which acts as an all-in-one heads-up display and scanner. PlatinumGames does a nice job finding plenty of varied things for players to do throughout the game, though some tasks are certainly more enjoyable than others; the stealth and following missions, for example, are usually a mixture of uninteresting and annoying. On top of the highlighted missions, there are usually hidden objectives as well, such as the toilet and cat that can be found in each individual File, with both going towards the in-game achievement list and its accompanying rewards.

Combat takes place both in the real world and in the Astral Plane, as players either leap willingly or are dragged into it though extra-dimensional gates. Players have three weapons to choose from — a gun, a baton, and heavy sword — and can switch between them on the fly to suit their style or the types of enemies they are currently facing. Regular attacks and combos are done by pressing the ZR button, while players can dodge using the B button. Legions act automatically in combat to an extent, moving to nearby enemies and attacking whenever they are in range, but players have the ability to moving them around manually by holding down ZL and using the right analogue stick. This is where the chain between Legion and player character does some of its work. If the chain can be wrapped around an enemy, it holds in place for a little while and allows a free combo to be unleashed, while a charging enemy can be caught within it, launching it back where it came from and briefly stunning it for good measure. 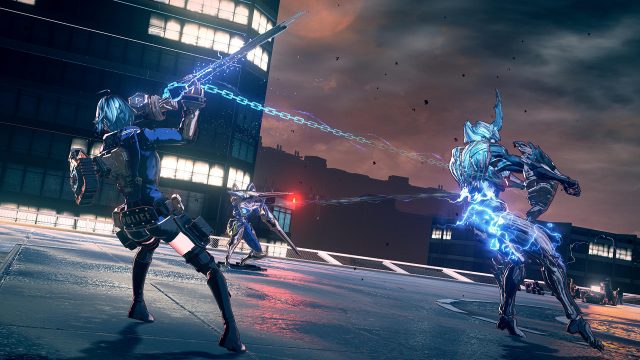 Astral Chain keeps the level of style that has come to be associated with PlatinumGames, and it’s most evident in the combat. Battles are always action-packed and there are lots of little touches that add to the game, such as the satisfying burst when a Legion is summoned and the game’s eagerness to insert brief slo-mo whenever it can. There are opportunities to do reactive joint attacks with the Legion every time a full combo, well-timed dodge, or other such actions are successfully achieved. Legions can also be assigned two special skills, but it’s easy enough on the base Casual mode to get through battles without needing them. Astral Chain offers a few difficulty options, though they are more geared to the forgiving side of things, with Casual mode and Standard mode available at the start while a much more challenging Ultimate mode is unlocked after completing each File. Meanwhile, Unchained mode offers a break from any potential awkwardness from trying to control two characters, letting players automate many of the combat actions as they wish. The extra difficulties, in-game achievement list, and an epilogue chapter that offers a series of challenge battles offer some incentive to continue playing after the credits roll.

Character upgrades are present, but not as big a part as in most RPGs. Linear equipment upgrades are bought using money mostly gained from selling junk items alongside materials awarded and looted, while Legions have fairly straightforward upgrade trees that use the Gene Codes obtained during investigations. Players get to customise their character’s look, as well as the colour scheme of their Legions, but all these systems feel more complementary rather than major parts of the game.

Though there is no jumping, Astral Chain features a number of platforming sections and puzzles where players have to use their Legion, which can float, to yank them onto other platforms, as well as using the Legions’ other abilities. The platforming sections, which primarily feature in the Astral Plane, are where Astral Chain meets the most challenge with its somewhat unintuitive control system as it deals with what amounts to controlling two characters at once. There’s never any challenge in the puzzles themselves; it’s usually more a case of figuring out which Legion the game wants to be used at a particular spot and them dealing with an awkward camera position or control system to get where needed. 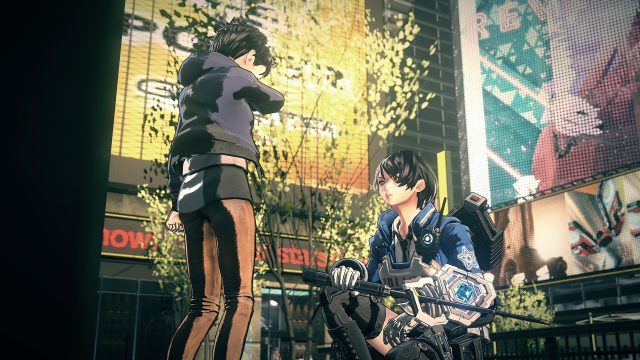 Being a police officer isn’t only about beating up Chimeras.

Astral Chain’s designs make heavy use of colour themes, the Chimeras and the Astral Plane having a red scheme while the police keep hold of the traditional blue hue. The urban landscape of The Ark is nicely curated and really feels like a potential future city. On the other side, however, the Astral Plan ends up rather generic and ultimately uninteresting after its initial appearance, made up of very similar looking floating blocks. The UI generally does a good job, though there are some minor annoyances, like an inability to properly keep track of the side cases that players have open.

The English voice acting is decent, though the script doesn’t really allow much subtlety in the performances. The decision to make the player character a silent protagonist also dilutes events, especially as their twin ends up with lots of dialogue. The music is a strong point, moving nicely between subdued background melodies in the quieter sections but pumping up into heavy metal tracks when the action begins, matching up well with the quick pace of combat.

Astral Chain is a very welcome addition the Nintendo Switch’s library and PlatinumGames’ portfolio. Some areas are stronger than others; the combat and style are both excellent, but platforming sections are less engaging and the game’s doesn’t make full use of its interesting premise and setting by preferring to go into more straightforward anime melodrama. It’s one that’s well worth checking out for RPGamers and non-RPGamers alike.