Time to Role-play in the Name of Odin

We are twelve installments into the Assassin’s Creed franchise from Ubisoft and one thing is very clear: the recent trilogy of Assassin’s Creed games have its own identity. Gone are the days of the pure action-adventure style games from the mid-2000s. Beginning with Assassin’s Creed Origins, the franchise has been wading deeper into the waters of the RPG genre. While the two previous entries took some daring and engaging steps into the RPG genre, it’s Assassin’s Creed Valhalla that truly stands out as not just the most refined of the trio, but as a top-drawer RPG in its own right.

This time around, players are put into the furry boots of young Viking Eivor. The story begins during a festive ceremony. Hearty Viking songs play as a plethora of food and mead are laid out in celebration of the friendship between Eivor’s Raven Clan and King Styrbjorn, an alliance meant to cement the protection of the clan from other warring clans. However, it doesn’t take long for tragedy to befall the festivities and an invading clan kills Eivor’s parents and massacres the Raven Clan. From there, Valhalla opens with a lengthy prologue level. Taking up to five hours for those who want to explore everything, it’s easy to get sidetracked in the icy mountains of Norway, though it is designed to keep players from going too far as many of the surrounding areas are steep to climb. This, by no means, is to call Valhalla’s opening hours a slog. Quite the opposite. This engrossing introduction paints a thoughtful picture of Eivor, making it easy to root for the protagonist and to set up the role-playing experience to come. 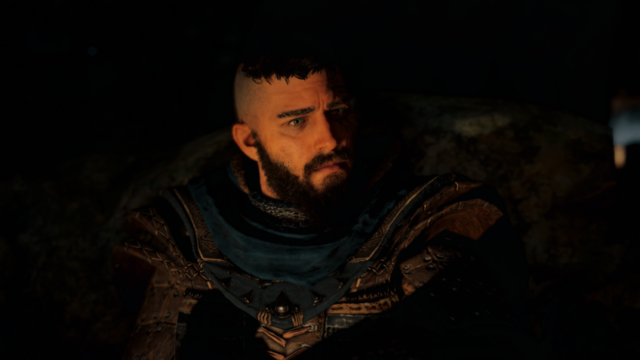 Eivor, Assassin’s Creed Valhalla’s main protagonist, is the most customizable character in the franchise’s history.

Valhalla’s story is easily one of its strongest elements. It’s a compelling journey and one of the best to come from the franchise, weaving a complex tapestry of lore, science fiction, and historical fiction. It’s apparent from the beginning that the story and primary setting of Viking-era England were the main focus, and the mechanics were built around it. Even the option to play a male or female Eivor has story reasons behind it, with a third option allowing for the in-game Animus to swap Eivor’s gender at certain parts of the story, for initially deliberately vague reasons that are revealed later on. Ubisoft took the role-playing elements even further by allowing players to not only customize Eivor’s gender and armor, but also hairstyle, hair color, and tattoos. Eivor truly feels like the player’s custom avatar, offering a greater sense of attachment to them; a male Eivor was chosen for purposes of this 90-plus-hour playthrough.

Eivor’s story is full of twists and turns but his anchors are his Raven clan and brother Sigurd. The tone of the narrative is much darker and more serious than Odyssey and forces players to make some heartfelt and at times grueling decisions. Besides Sigurd, Valhalla is filled with interesting non-player characters, many of which make up Eivor’s clan members who run Ravensthorpe. The settlement plays an important role within the game’s mechanics and the story. Players have the ability to expand it over time which allows for such things as weapon and armor upgrades, and hosting a feast, which gives temporary buffs for combat. Expanding the settlement will attract new side quests, more characters, potential romances, and even the entire mystical story arc of Valhalla. In short, players who want the full Valhalla experience will not want to ignore the settlement. 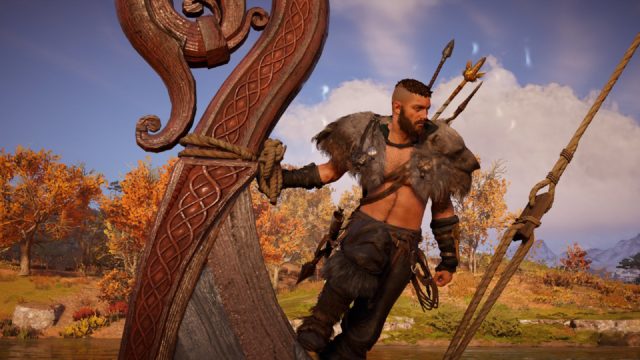 Eivor’s story is one of the most compelling sagas in an open-world RPG. The story blends the traditional AC historical fiction with sci-fi and mythological elements.

The developer took some obvious narrative inspiration from Dragon Age: Inquisition, a game that does a good job of introducing self-contained, episodic stories that the player chooses from a giant map in the clan’s headquarters. Players who pay attention to the details of each episodic narrative are rewarded with hints and tips that always lead back to the main story. The deeper story elements are full of interesting characters, landscapes, and political struggles and are well worth investigating fully, not least because rushing through the main narrative will cost Eivor in the end as certain allies or decisions can provide vital assistance in his hero’s tale. Despite the depth of the story, Ubisoft has also managed to keep the narrative experience fairly streamlined, allowing for the franchise to boldly stand next to other open-world RPGs.

The combat in Valhalla is visceral, chaotic, but also necessitates thought. It never gets old watching Eivor decapitate an enemy in the middle of a roaring battle full of war cries and burning buildings. The historical brutality of the Viking way of fighting shines in these moments. At the same time, fighting feels more strategic by being slower, deliberate, and heavily relying on a stamina system. Health doesn’t regenerate and the player has to utilize local flora like berries or snag a meal from a nearby house to sustain themselves. However, players can’t simply hoard an inventory full of food to gorge on as and when needed. A player can spam attacks or keep dodging but risk the penalty of having an exhausted Eivor stumble about the battlefield, vulnerable to attacks. 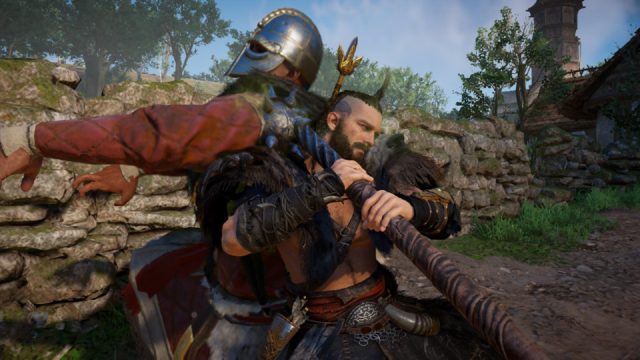 Eivor is a brutal warrior and the finishing moves he performs in combat are both painful and satisfying to witness.

There’s a satisfying amount of weapon choices in Valhalla. Players can swap between two-handed swords and spears, shields, axes (single and two-handed), and three types of bows. The weapons work synchronously with the three combat archetypes: warrior, assassin, and hunter. Warriors are more of a traditional Viking fight style, with assassin being the series’ traditional style, and hunter focusing on sniping enemies from a distance. No matter what the player chooses, all three of the development trees give bonuses to all of Eivor’s stats, so there’s no need to worry about having an unbalanced fighter. Leveling grinding alone won’t get Eivor all the skills either as many of the game’s most powerful skills are found in skill books hidden around the world map or obtained through raids.

Raiding is a big part of Valhalla. This is where players will gain many of their resources for building the homestead of the Raven Clan. With the blow of his horn, Eivor summons the brave men and women into the target camp and begin to raid and plunder. Going in stealthily and alone is an option too, albeit a more time-consuming and methodical one, though some story-related raids won’t allow for it. Elsewhere, Valhalla has thankfully taken out the cumbersome ship battles found in Odyssey, and it’s easier to get around on water as ships control much more smoothly.

Side quests are their own separate game element in Valhalla. Many of them are found in the open world of the game, and have a much different tone from the main narrative. This works in Valhalla’s favor as the side quests become a comical breather between the heavier story beats. From burning a house down in order to help a couple’s sexual issues, to a man with a “splitting” headache due to an axe being lodged in his head, side quests never feel like a forced part of game progression. It’s left up to players to decide if they want to pursue them, and those who do will find them entertaining. 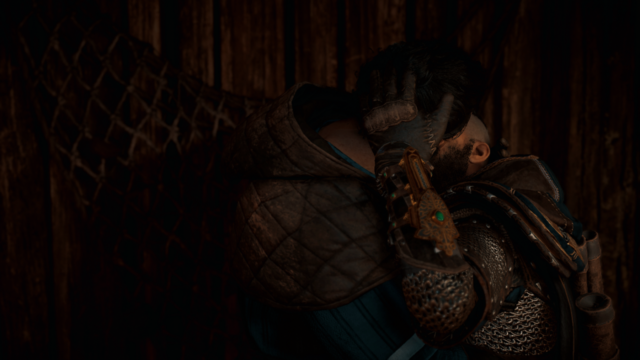 Ravensthorpe, the settlement in Valhalla, is where Eivor will spend a lot of time upgrading armor, preparing for raids and potentially locking lips with fellow clans people.

Valhalla isn’t without its flaws. Like virtually every open-world RPG released in recent years, there were multiple bugs and glitches that players who bought it at launch had to struggle with, though none of the reported game-breaking glitches were witnessed during the review playthrough. The game also looks a bit janky at times on the standard Xbox One. Eivor’s hair clipped, and there were quite a few texture pop-ins. A couple of updates were dropped between the game’s launch and the writing of this review, which have visibly helped with the performance of the Xbox One version.

Coating the entire Viking experience in a sonic and atmospheric glaze is the music created by returning composer Jesper Kyd. Kyd and Sarah Schachner helped create an auditory portrait of the frigid mountains of Norway and the rolling hillsides of England, but it’s Kyd’s contributions that stand out. “Out of the North” is a particular highlight that subtly plays in the background of the prologue area and is sad to leave behind. The intense drumbeats and soaring tribal vocals that crescendo midway through the near four-minute track offers a great parallel to Eivor’s rise from tragedy. The same attention to detail was added to Valhalla’s sea songs, audible queues (such as a trinkle sound when Eivor nears a mysterious dwelling), and crunch of a skull underneath his foot.

Even with its technical shortcomings on last-generation hardware, it is hard to not call Assassin’s Creed Valhalla an amazing open-world RPG. It’s obvious that Ubisoft did its homework and learned from Origins and Odyssey. Valhalla’s story is one of the best not only in the franchise but in the open-world RPG genre. The world is vast but not laden with empty, pointless space. Combat is addicting, character customization is the best the franchise has ever seen, and the welcome return of composer Jesper Kyd makes for one of last year’s most immersive and satisfying experiences.