And Some Other Characters Too

Aselia the Eternal has followed the route associated with many other visual novel series by starting out with an adults-only approach. Developer Xuse later created an all-ages version, which JAST USA has chosen to localize despite its usual concentration on adult titles. The resulting release is a highly enjoyable and memorable experience, bringing hope that Aselia could do well enough for JAST USA to continue bringing more accessible visual novel-style titles to Western shores.

Players assume the role of Yuuto Takamine, a young man living alone with his adoptive younger sister, Kaori. Her natural parents are dead, but otherwise their life is an unremarkable mix of attending school while Yuuto attempts to support himself with a part-time job. One night, however, they find themselves mysteriously transported to a fantasy world they name Phantasmagoria. Here Yuuto finds himself forced to fight for the local king in exchange for Kaori’s safety. Wielding a sentient sword and given the title of ‘Etranger’, Yuuto is placed in command of a group of female spirits, humanoid beings with magical powers whose sole purpose is to fight.

The plot moves from this initial setup at a fairly brisk pace, keeping events progressing along nicely while still finding the time to include lots of characterisation, relationship development, and background for the world. Aselia makes it clear that its visual novel roots are paramount by not divulging the first battle until after a two hour prologue, and missions are frequently interrupted by intermissions for plot purposes. Thankfully, the story is so well-written and paced that this isn’t much of an annoyance and helps serve to break up the longer missions. 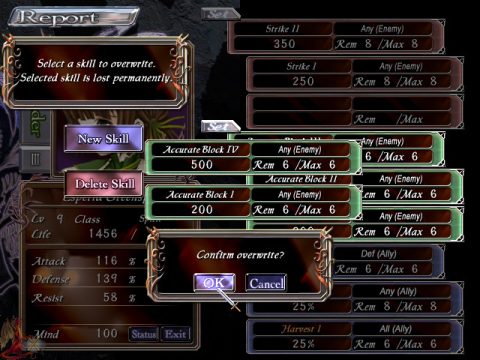 Menus are fun! Or so the game wants you to believe.

While the story in Aselia the Eternal is mostly excellent, it suffers from a few issues, the most prominent being the relationship between Yuuto and his sister Kaori. There’s a strange level of obsession that goes both ways, with Yuuto frequently becoming over-protective and rather unsympathetic in scenes where Kaori is involved, although Kaori also has similar moments. It’s understandable that Xuse wants to highlight a close bond between the two for Yuuto’s motivation, but it’s highly debatable how realistic the relationship is and there are a few points where it gets close to actually being disconcerting. Fortunately, throughout much of the main game Kaori is elsewhere, which means her disconcerting character is not enough to counter the excellence found in the rest of the story.

Yuuto is a good fit as a protagonist outside those scenes involving his sister, and he is supported by a wonderful cast. The vast majority of major characters are near impossible to not get attached to, and really carry the story along. Even the relatively unimportant spirits under Yuuto’s command are given ample opportunity to express themselves, develop throughout the story, and stick in the memory. The dialogue throughout is excellent and care has been taken in introducing and developing a number of themes, including the lowly treatment of the spirits by regular humans. Aselia even goes so far as to create a full fictional language, including Yuuto’s learning of it within the story itself.

Aselia the Eternal contains routes for each of the five main heroines, with two additional routes that are unlocked after the game has been completed at least once. The more easily activated paths are achieved by a combination of the heroines’ Mind and Love scores at a certain point in the story, while others have more specific requirements. Mind and Love scores are affected by a combination of actions in battle and Yuuto’s choices during certain story events. It should be noted that while Mind points are easily visible during battles, there is no such obvious scale for the Love points, although a hint can be gained from the heroine’s status pages. The New Game+ also allows players to view the translations of those scenes featuring the game’s fictional language. 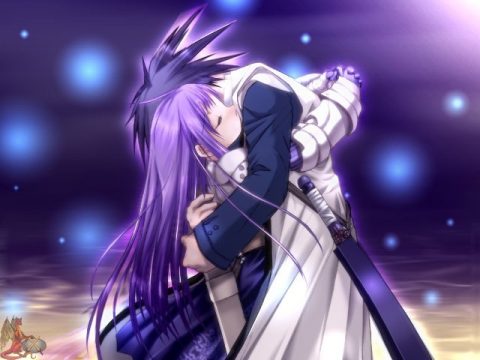 Battles take place on the world map and are spread over the course of roughly two dozen missions. Missions are turn-based, with the player and opponent each getting a chance to move and attack enemy squads. Squads are made of up to three spirits, each with a slot for an attacker, defender, and supporter. Different colour spirits are adept at different areas and have unique skill sets, for example blue spirits are good as attackers but when employed as a supporter they can instead interrupt the opposing supporter. The actual fights between squads are also turn based, with the attacking squad getting the first turn before the defending squad retaliates, although certain skills slot in at various points. While most engagements between squads break off after a single turn, certain squads are labelled with the Continuous tag, which means the fight will last until either the attacker or defender is completely defeated.

The battle system is engaging, partly because at no point can players rest on their laurels and assume indestructibility. Each mission comes across akin to a logic puzzle reminiscent of Valkyria Chronicles, and appealing for the same reasons. The necessity of resource management also adds an extra layer of strategy. Characters only get a limited number of each move, and must return to a friendly base to recharge. Spirits do not level up automatically, but must draw from a shared pool of Ether that is also used to construct various buildings in friendly towns. Game over occurs if any one of the major characters dies in battle, although the game mitigates this slightly by allowing players to save at any point on their turn prior to an enemy contact. The game can continue if a minor spirit character dies but it’s highly likely players will wish to avoid even this, partly as the game doesn’t appear to offer replacements, but also because of the sheer likeability of all the spirits fighting under Yuuto.

The biggest downside of the battle system is that it requires players to spend a lot of time in menus switching squads and active skills around. Enemy AI isn’t particularly sophisticated either, with spirit squads either charging directly at players’ bases or staying holed up where they are. Although the game can be played with a gamepad, using the keyboard and mouse is preferable due to the large focus on more cursor-friendly menus. Additionally, there is a bug where advancing tutorial text on the battle screen using the keyboard or gamepad instead of clicking with the mouse will accidentally skip large chunks. The resource management can slow things down a bit too much sometimes too, requiring players to traipse back and forth to replenish skills in some of the more challenging missions. 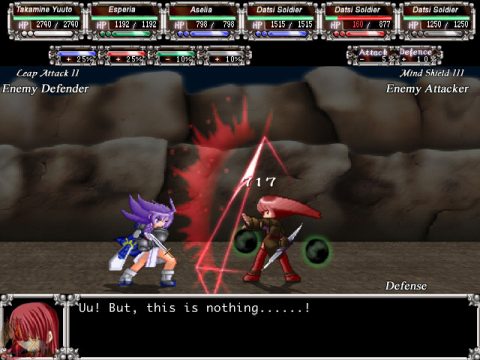 I didn’t need most of my health anyway.

Outside of the mission objectives there are a few optional tasks that can be done, such as recruiting additional trainers, or defeating various dragons to release more mana. However, these are generally quite out-of-the-way and can take a lot of time to achieve for rewards that aren’t needed to complete the game and don’t add anything to the story. The game allows players to save clear data and use this for a New Game+ that retains character levels and skills while unlocking more challenging difficulty settings with a higher level cap. Aselia should take about thirty hours to complete, give or take a few based on the player’s reading speed. Fortunately those wishing to speed through different routes when replaying the game have the option of skipping through dialogue, dramatically helping the quest for previously unseen content.

Aselia‘s visuals undeniably display their 2003 roots, but a good amount of well designed scenery along with the immediately identifiable character art and sprites keep that from being too much. A few minor inconsistencies and oddities do show up in the art, including a slightly different style between male and female characters. Male characters also appear strangely huge in a number of places, appearing at least eight feet tall even without the females pictured tending to be unexpectedly short. Battles are well animated, but also very slow. Thankfully the button allowing story passages to be skipped serves the same function in combat, speeding things up nicely. The music is generally pretty good and fits the related scenes well, with the slower paced tracks a particularly pleasurable listen. The original voice acting is also good, minus one or two slightly annoying younger characters. Notably the voice acting includes some impressive attention to detail in using the game’s fictional language throughout, adding an appreciated extra level of immersion to the world.

Aselia the Eternal is a game that greatly rewards those willing to be sucked into the story and take the time to think through their battle plans. Obviously those looking for the opportunity to gleefully hack-and-slash their way through opponents would be much better off searching elsewhere, but anyone willing to sit back and let the story flow should find the experience a welcome one. Aselia’s story travels through many twists and turns in the company of memorable and enjoyable characters, which ought to at the very least satisfy many people.