Held Back from Greatness

Arc Rise Fantasia seemed to be the answer for Wii owners who wanted a traditional-style RPG for the system. Combining the skills of a few former employees of Tales Studio, up-and-coming developer Imageepoch, and renown composer Yasunori Mitsuda, made for an especially intriguing game. In several ways, this gathering of talent paid off, as Arc Rise Fantasia has many redeeming qualities that make it a worthwhile RPG. However, the awkward script and poor voice acting are blights on the title, keeping it from being a truly great game.

The beginning of Arc Rise‘s story is a little confusing and somewhat aimless, but this changes quickly. The main character L’Arc Bright Lagoon is a mercenary for the Meridian Empire, and one fateful day is tasked with fighting off a flock of Feldragons. He is knocked off the Lightship he was on and is nearly killed by a dragon’s explosive death when a mysterious girl named Ryfia arrives, stopping the toxic conflagration with her song. L’Arc accompanies Ryfia, through which he eventually learns that he is a Child of Eesa, a person who must choose one of two religious philosophies, or laws, to determine the fate of the planet. As this brief summary hints at, Arc Rise does use many familar JRPG conventions, some played almost painfully straight. Others, however, are given interesting twists, making the plot more engrossing. It’s also intriguing that ARF doesn’t really have a main antagonist, and the story handles it well. The truth behind the two laws, as well as the origin of the god Eesa and the religions based around him are also well done and thought-provoking.

There are also some instances of poorly explained or confusing plot points, which can probably be attributed to the localization. While ARF hardly breaks any new ground in the story department, it is still pretty good and carries the game well. The playable characters, important NPCs, and villains mostly feel distinct and many are interesting and likable, with some amusing interactions between them. While most characters get varying amounts of development, it does become sparser as the end approaches.

The biggest blow against the story, however, is its sub-par localization. Much of it comes off as awkward-sounding, probably due to the translation erring on the too-literal side instead of trying to make the English flow naturally. It is difficult to tell if a plot point is confusing because of the original script, or because whoever translated it could have worded it better. When it’s not awkward, the script sometimes comes off sounding dry instead. There are even a noticeable number of grammar errors, such as the repeated victory quote, “Not like we lose, but still…” That’s not to say there isn’t the occasional decent line, but for the most part, the lack of effort spent on the localized script is glaringly obvious. ARF‘s overall plot, setting, and characters are good, but they are very much brought down by the poor localization. 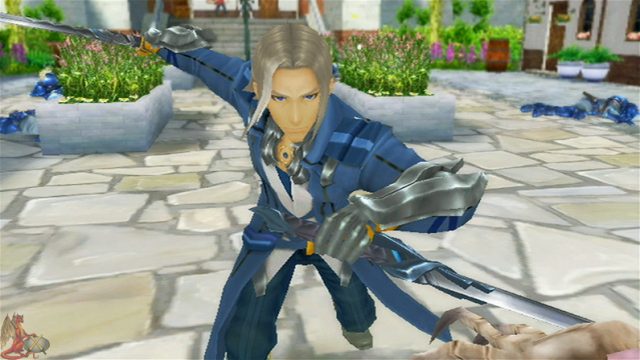 Rastan is all kinds of awesome.

ARF‘s battle system is at heart a traditional menu-driven affair, but it has many aspects that distinguish it from most games in that category. At the beginning of a turn, the player decides what actions each character makes, with the order dependent upon a character’s speed and the action being taken. A helpful bar at the bottom right of the screen keeps track of turn and activity order, including the actions of the enemies. Every act during a battle uses a set number of Action Points. The amount of AP available depends on the levels of the characters and how much AP was used in a previous turn. Managing and deciding the best way to use AP during a turn is key to winning battles.

Various combinations also play an important role in ARF‘s battle system. Stringing together two to four normal weapon attacks creates a powerful combo. Magic can also be combined, as characters using two of the same spell in a row will create a more powerful version of the magecraft. By having two or more characters cast the same spell at once, a Tandem Sync is created, which is not only powerful, but also regenerates more AP. Finally, there are Excel Acts, special moves that draw on Skill Points. Having three characters perform an offensive Excel Act on one target will trigger a Trinity Act, which causes devastating damage on top of the previously performed Excel Acts.

All of these abilities with enormous destructive potential will be needed for this game’s boss fights. At first these boss battles may seem frustrating, but careful thought and strategy will make them manageable. Players are encouraged to move characters around the battlefield so that they won’t all be targeted by area attacks. Using an item called an Analyzer allows players to discover a boss’s attributes to help ensure victory. Figuring out a boss’s pattern and seeing what attacks it uses also helps greatly. Characters will also verbally warn the player that a boss is about to perform a lethal attack, in which the best option is usually to defend. Even if the player loses a battle, the knowledge necessary to beat it the second time should have been imparted during the loss. Using trial-and-error along with a little critical thinking is what makes ARF’s battles exciting, especially the satisfying feeling of beating a tricky boss.

What does take away from the boss experience somewhat is the occasional lack of save points before battles. Most of the time these are placed conveniently prior to the fight, but not always. This issue feels especially bothersome due to many extra bosses found in dungeons that resemble local monsters, but are differently colored and usually stand still. It is easy to mistake them for regular enemies and instead find oneself in an unexpected boss fight. While they usually aren’t too difficult, some can throw players in for a loop.

Character customization is another feather in Arc Rise‘s cap. To begin with, weapons can be customized by placing Tetris-like blocks called weapon pieces into them. The pieces carry special abilities called Arm Forces, which can bestow the character with a variety of abilities that range from increasing the magic stat to preventing death. If the weapon’s Arm Force Frame is completely filled without any unused spaces, a special hidden ability will be unlocked. Additionally, each weapon has one or two built-in Arm Forces to supplement whatever experimentation supplies. Restrictions on the weapons can be lifted by gaining Weapon Points, which can be earned in battles like experience points. Choosing which weapon to use and which pieces to use in it adds another welcome layer of strategy to battles. 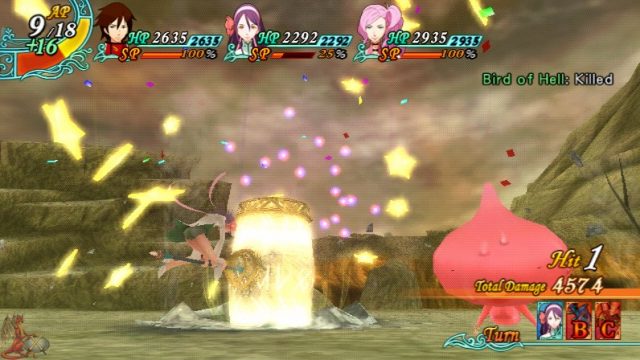 Where did that Kopin come from?

As for magic customization, each character has a menu called an orb, into which elemental gems are set that enable the casting of magic in the first place. The orb can be customized in a workshop in order to place more slots for gems, boost a character’s elemental power, and determine how many Magic Points each of the four spell levels receives. Each spell level has differing and stronger abilities than the previous one. Gems can resonate with each other if they are identical or are complementary elements of the same level. This gem resonance will create either high-level magic or a combination element, such as light and ice. Gem repulsion occurs when gems of opposing elements, such as water and fire, are placed in the orb, making both sets of magic weaker. While the orb system seems a tad complex, it is easy to get the hang of, and the ability to make a character favor one element or be able to easily switch between magic types is a great boon in combat.

Graphically, Arc Rise Fantasia is nothing special. Most everything in the game looks decent enough, but some cities/towns, dungeons, and overworld backgrounds have obvious jagged and pixilated looks to them. This may be due to the sheer size of these places. The character designs will be familiar to anyone who has seen the anime Eureka Seven, as both were done by Kenichi Yoshida. They have a distinct look to them, though some people may still find that ARF‘s characters look generically “anime.”

There are no major issues with the controls. One hiccup, though, is how the camera works in dungeons. Normally there are no problems with the fixed camera view, but when exiting any area, it does not zoom out far enough to see ahead of L’Arc, which often results in unwanted monster encounters. This game sports Party Chats, which function like the famous skits of the Tales series, allowing players to see more character interaction. While there are some good ones that aid in fleshing out characters, several chats are noticeably not as engaging or amusing as skits. Many are wasted on characters simply recapping or banally commenting upon recent in-game events.

Arc Rise Fantasia‘s music is absolutely fantastic. The themes of battle, story events, and the locales are well-done and quite befitting of the situations in which they are used. That’s not to say every track is a gem, but many pieces are at the very least pleasant and several are excellent. While Yasunori Mitsuda may be the “star” of this soundtrack, the other two lesser-known contributors are no slouches, either. The relatively unknown Yuki Harada’s tracks are overall very strong, some arguably rivaling Mitsuda’s work, such as Harada’s “Unexpected Fight” versus Mitsuda’s “A Grand Existence,” both of which are recurring boss themes. Shunsuke Tsuchiya’s overall contribution is perhaps the weakest, but even he made a few outstanding tracks, including the penultimate boss battle theme “Now is the Time of Conclusion.”

The voice acting in this game is already infamous by now, and deservedly so. Some of the actors sound as if English is not their primary language. While the acting does eventually improve a bit, for the vast majority of the game, it is laughably bad. While there are a few noticeably decent actors, the relative effectiveness of characters such as Rastan and Ignacy is hardly enough to make up for the atrociousness of most of the cast. Voices can be turned off, but it can make boss fights more difficult, as players will miss the audio clues of when a boss is about to use a devastating move. Sadly, the poor voice acting does detract from the story’s impact, even if the effect is not enormous.

Arc Rise Fantasia resembles a combination of the Tales and the Luminous Arc series in its mechanics, which is to be expected considering the people involved in making the game. Sadly, one trait that the English versions of those games share is one that ARF sorely lacks: a decent-to-excellent localization. While ARF certainly has issues not directly related to the script or the voice acting, they are minor in comparison to its glaring problems. In spite of this, ARF is still a very good game, though it is certainly held back by its shortcomings in the localization department. What could have been an excellent RPG is instead a solid and enjoyable, but heavily-flawed, game.