This Knight’s a Little Rusty

Announced only one month before its debut, Sky 9 Games and Curve Digital’s adventure RPG A Knight’s Quest seemed to come out of nowhere. Having now completed it, it’s safe to say that its resemblance to a certain 3D adventure RPG series starring a young lad in a green tunic goes beyond just a few aesthetic similarities. While the game’s structure feels immediately familiar, A Knight’s Quest does manage to set itself noticeably apart in several key areas, usually in a favorable way, though not without some flubs that are of major consequence.

The gist of the story is quickly explained. Rusty, a young adventurer from the port city of Regalia, is exploring a mysterious cave when he comes across a strange metal gauntlet, and clumsily disturbs a giant foreboding crystal, causing the whole place to cave in on itself, with him barely able to escape. Back home, the people of Regalia are unnerved by the floating island shooting a bright light into the sky that appeared shortly after Rusty’s mishap, and he is tasked with traveling across the land to find the three legendary Spirit Knights who once saved the realm, or at the very least collect their sacred weapons.

There are a lot of familiar tropes present in the overarching structure of the game, such as the three Spirit Knights being in distinct geographical locations of a forest temple, a desert volcano, and a snowy mountaintop. Attaining each of the sacred weapons also nets Rusty a new elemental power that he can use to further explore the free-to-roam 3D world, reaching new areas and secrets as he gains new abilities. Each of the three weapons — sword and shield, metal knuckles, and large hammer — has its own pros and cons in combat, and bestows a new elemental spell to use in battle and during platforming and puzzles. 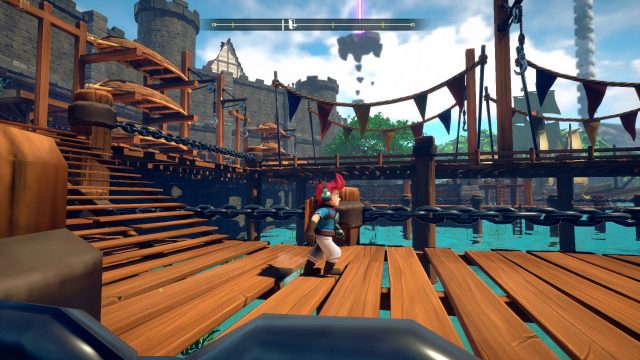 That floating island shooting a purple laser into the sky? Yeah, you caused that…

The real-time combat system is action-oriented, with the PC controls utilizing one mouse button to target an enemy while pressing the other one repeatedly to attack. The majority of enemies are simple enough to make this fairly basic method of combat more than sufficient. Enemy variety is a bit low, with only a few new foes introduced throughout the game. Certain dungeons feature combat challenges with a higher difficulty curve, though this is generally achieved by throwing more enemies or trickier environmental conditions, like icy floors, at the player rather than new enemies with more challenging attack patterns.

A Knight’s Quest features quite a lot of platforming, to the point where this is at least as much of a focus as the combat is. One dungeon, the Desert Proving Grounds, consists of three wings, devoted to the game’s three main gameplay styles of combat, platforming, and puzzle solving. In addition to the standard running and jumping, Rusty can perform a wall run, and players will unlock equipment to enable rail grinding, as well as some spirit powers near the end of the game that further expand Rusty’s powers to allow him to run over lava, utilize previously invisible platforms, and freeze himself in a ball of ice to roll over certain obstacles. By and large, the platforming is enjoyable and well-implemented, though the game does suffer from one or two supremely frustrating platforming sections requiring precise jumping between moving platforms while avoiding deadly hazards, and these are enough to sour one’s mood considerably.

At least the player is in full control of the camera at all times, making lining up jumps, for the most part, a fair task. There is, however, one particular late-game boss whose design boils down to 95% extreme platforming and only 5% combat, and the designers opted to lock the camera in place in his arena. Not only is this the only part of the game where the player is suddenly bound to a fixed perspective during platforming, but the skewed camera angle makes it hard to correctly judge obstacles and distances, let alone execute tricky jumps correctly, particularly when playing using a PC keyboard-and-mouse setup. Whereas all other boss battles are interesting and engaging, being defeated over and over again by a camera angle makes this one in particular feel disingenuous, and needlessly frustrating. 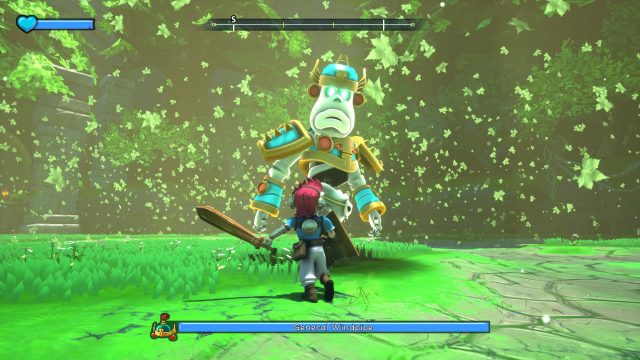 Like the dungeons they can be found in, bosses really adhere to the “three elements” theme.

A major issue encountered during this review was a late-game glitch that caused the game to restart from the beginning rather than load the correct save file. Since there is no option to manually save, and the game automatically overwrites the single save game file at regular intervals, the restart glitch immediately overwrote the active save file, necessitating a restart and, in essence, playing the lion’s share of the game twice in order to complete it. This is hopefully not a typical occurrence, but its effects are significant enough to warrant pointing out.

These issues notwithstanding, it’s hard not to feel a certain satisfaction at the game’s scope when exploring its vibrant world. Traveling from one place to another means crossing vast areas, like open fields in front of castle walls, deep gorges with crumbling bridges, deep canyons that must be traversed vertically as well as horizontally, sandy beaches, and frozen ice fields. These are no mere digital spaces of empty mileage; each location is full of optional challenges and hidden secrets, like timed races, simple side quests, collectable slimes to find, and more. Unfortunately, taking the time to deeply scour the countryside isn’t as rewarding as it could be, as the rewards from many of these activities simply aren’t worth it, other than for the completionist joy of it all; taking a strictly critical path through these locations still means players will be more than ready to handle the challenges in store.

Though the areas themselves are well designed, the actual act of traveling through them becomes quite cumbersome as the game progresses. Despite a map being available in the menu, knowing where to go isn’t always clear, and players may rely overly on the active quest tracker visible on the on-screen compass. There’s also a ridiculous amount of backtracking required: Rusty must find his way to each dungeon on foot, then is usually summoned back to town after defeating its boss, backtracking through the same areas. The game’s latter half features return trips to each previously-visited area for more quests and dungeons, meaning players are making the same trips at least three times, or more should they get lost or return for side quests. The whopper is that a fast travel system has even been put in place — the fast travel portals are readily visible in all key areas when first visited — but the required item to actually make use of this feature isn’t granted until near the game’s end. Even then it still requires players return the long way to each area at least one more time to activate the fast travel portal. It’s a real shame that this system was designed, visibly put in place, and then kept from the player until the very end, where it’s relegated to being almost useless. 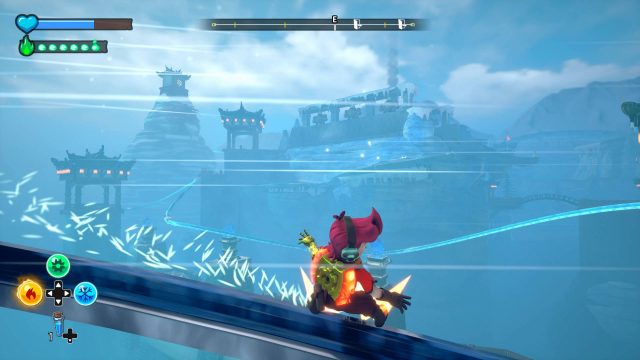 There’s a lot of pretty sights to see, and zipping by, grinding the nearest rail over a bottomless gorge, is one of the most stylish ways to do it.

While players are forced to repeatedly travel through the same areas of the kingdom of Regalia, it’s at least nice that the game is a visual treat from start to finish, with lush and vibrant colors making the game feel warm and welcoming. The same vastness and open feeling to the normal world environments is mirrored in the dungeon designs, making them something much more than a mere succession of rooms to clear. One dungeon stretches over an entire swamp, while another is a tower reaching unimaginable heights, piercing the clouds on its way to the heavens, which must be scaled both inside and out. Dungeons do a good job of marrying combat, platforming, and navigation puzzles requiring the attained spirit powers into cohesive wholes.

The game is nearly voiceless, barring a few token sounds made by characters during dialog, as well as the sounds Rusty makes as he leaps and slashes his sword all over the place, though the latter get old quickly. Even so, the game’s soundtrack is quite good, with unique and memorable themes playing in many areas. Some musical tracks even show unique geographical flavor; for example the desert town of Zameris has a distinctly Arabian soundscape. It’s also worth pointing out that the writing in A Knight’s Quest is surprisingly sharp and, at times, quite witty. One noteworthy bit of humor comes when a broken bridge keeps Rusty from accessing the desert temple and he’s tasked with rounding up several guards in order to fix it. Rather than actually fixing the bridge, however, the guards simply stack on top of each other, creating a human bridge spanning the gorge that “ooohs” and “aaahs” with every careful step Rusty takes on it.

A Knight’s Quest is a respectable achievement. In terms of pure design, it has an impressive scope that it manages to make good on. Blending three gameplay styles — combat, platforming, and puzzle solving — in a vibrant and vast 3D world is no mean feat, and the game never falters in that regard. However, the hiccups that occur along the way range from inconvenient, like a fast travel system that is locked away until it’s not needed anymore, to downright frustrating, like being locked into an awkward camera angle during a finicky platforming boss fight. Though not perfect, the game is a simple idea given a decent execution, and should appeal to those currently waiting for their next Legend of Zelda fix.