Eastasiasoft announced that it is bringing Compile Heart’s Mugen Souls to Nintendo Switch. The game will release digitally in spring 2023, with a physical release also planned. Physical Standard and Limited Editions will be available to pre-order through Playasia from 11pm Hong Kong time (10am EST/3pm GMT) on Thursday, November 24, 2022. The Limited Edition is limited to 3,000 copies and includes: 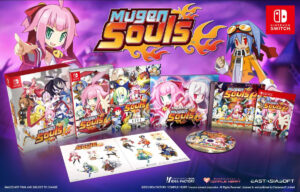 Mugen Souls was originally released for PlayStation 3 in 2012, with its North American and European release handled by NIS America. A PC versions was released worldwide by Ghostlight in 2015. Mugen Souls features turn-based combat on a free-roaming map and follows Chou-Chou on her attempt to conquer the seven planets. She travels between them, turning their heroes and demons into her loyal servants. A sequel, Mugen Souls Z, was released for PlayStation 3 in 2013 in Japan and in 2014 in North America and Europe.