While I didn’t get the chance to really explore a lot of the beginning town, I did at least get to walk around the gym and help train some wrestlers by punching them in the face, as one does.

Ever watch wrestling as a kid, or even as an adult? Or have wrestler action figures that you would play with? Jump into a game full of nostalgia with throwbacks to the 80s and 90s wrestle stars where you get to actually play a wrestler action figure in a toy world where you get to fight other wrestlers. In WrestleQuest, the player starts off as a young version Randy Santos. Randy loves wrestling shows — the matches, the glamor, the promos — and practices in his own ring with his toys. In this toy world, everything is alive and they have some fun witty banter and insults they throw around at each other, and these theme continue as Randy looks to fulfill his dreams in this world where wrestling is ever-present.

Growing up watching wrestling shows with my sister, I was intrigued on how Mega Cat Studios and Skybound Games were going to mold this take on the wrestling world. I had the opportunity at PAX West to demo the pixel-art game, and I’m pretty excited to play the full game. The full forty-hour game promises up to twenty playable wrestlers, participating in turn-based bouts in a party of up to three members. Each character has its own set of side quests. There are even shrines to the most popular wrestlers in different towns, who are each modeled on different wrestling styles, so there should be plenty of variety. 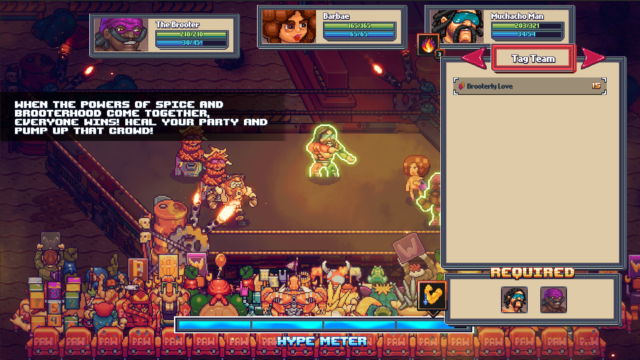 Wrestling is all about the show; it’s no good doing damage if you aren’t hyping up the audience.

While I didn’t get the chance to really explore a lot of the beginning town, I did at least get to walk around the gym and help train some wrestlers by punching them in the face, as one does. In true retro wrestling show fashion, players have to cut a promo before a big match. I had a lot of fun with this, because you get to pick your own responses. Your opponent will shoot back at you with insults, prompting you to respond in kind.

Next came the match itself, which was more than just smashing “A” to win. Players have to balance their hype meter, special moves, and exhaustion levels. The hype meter indicates players’ popularity with the audience, and impacts the success of special moves so balancing when to hype up the audience or go for victory is a learning curve. To defeat their opponents, players have to pin them down for the traditional three-count from the referee. Pinning opponents necessitates players keeping an arrow within a green bar that pops up on screen. A similar mechanic exists to let players kick out of being pinned themselves. The end match was tough, and while regular bouts start out pretty easy, the difficulty ratchets up quickly. However, figuring out all the moving parts is very much part of the fun, though trading insults was definitely my favorite part.