The demo does a great job introducing players to the game’s combat, its colourful world, and the various pillows that one will encounter.

Card-based battlers have been steadily gaining popularity over recent years. While they have been around a long time, they are not a genre I’ve found myself gravitating towards, and trying to make them stand apart from others on the market is a challenge in itself. Spectra Entertainment’s Dream Tactics is a strategy RPG that uses card-based mechanics to punish adorable pillow enemies.

Dream World is under attack from a horde of evil pillow monsters. At the beginning of the demo, players are introduced to Neru and Luna, who seem to be on the run and come across a pillow monster that attacks them. After defeating the monster, the girls continue exploring until they reach a town full of pillows, who are convinced that the girls may be bandits. With no way to parlay, the girls are forced into battle. During it, the girls also meet Pike, a level one pillow who has lost a unique key. In terms of story, this is where the demo ends.

While there isn’t much story to explore in a thirty-minute demo, the full release could benefit from going a bit deeper. The writing that there is very charming and funny, at times breaking the fourth wall. That being said, it was hard to get a feel for what to anticipate story-wise, as I didn’t get an opportunity to learn why the characters were on the run. If the writing is any indicator, the game is going to feature adorable characters and silly banter. 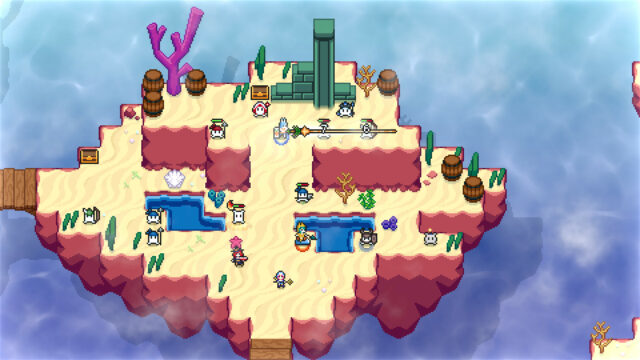 Right off the bat, the game allows for adjustable difficulty, which is great for those unfamiliar with card battlers, or for veterans who want a challenge. Players can enjoy the game via a keyboard and mouse, or they can use a controller. Unlike a lot of strategy RPGs, there is a lot of free movement, as Neru and her friends can wander around the map, bash barrels for currency, and collect treasures along the way.

Once the player engages in combat, the perspective shifts to a standard tactical RPG. At the beginning of a battle, each heroine has five cards to choose from, each with a magic point (MP) cost. Each character can attack multiple times based on the amount of MP they have, and can even redraw cards during their turn in hopes of getting access to a better move. Once MP is drained, they can no longer act. Each character can also redraw cards, but can only do so until their points have been depleted. Once a character attacks, they can no longer move, so placement at the start of a character’s turn is incredibly important. At the start of every turn, thankfully, our heroines will have a new set of cards, replenish their MP, and gain one redraw point as well.

Battles are fairly straightforward and not too challenging on Normal difficulty. The important elements to keep in mind are character placement and spending one’s MP wisely each turn. The imposed limits do a good job of not allowing the player to feel overpowered and allow for more strategy in terms of thinking ahead instead of relying on brute force. While characters can attack multiple times based on how much MP they have, sometimes the cards don’t align to permit it, as they include a range of actions including status aliment cards, heals, or even additional movement. 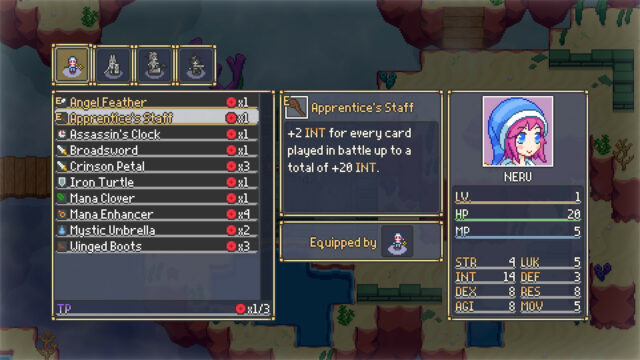 Dream Tactics has an adorable and vibrant presentation. There’s a great use of colour, and charming art direction. What little music was present in the demo was also quite solid and enjoyable to listen to without feeling grating. The menus are clean and simple to navigate, with information clearly labeled. My only grievance is the lack of ability to sort all the equipment that one comes across.

The game boasts over one hundred different cards, and during the demo, I was able to find cards within chests. While each heroine has specific cards unique to them, other characters can equip their cards, but at a cost. This encourages a lot of mixing and matching within each character’s deck. I’m very excited to see what kinds of new cards I will encounter when the full game releases.

The demo was only around thirty minutes, and it left me feeling very positive. While I wish I had a better understanding of the story elements, I’m fine with the fact that I instead got a taste of the game’s punchy dialogue. The demo does a great job introducing players to the game’s combat, its colourful world, and the various pillows that one will encounter. I’m very curious and hopeful about what to expect when the game releases.

Disclosure: This article is based on a demo build of the game provided by the publisher.