Not only is the story engaging and the art alluring, but also the tweaks to the conspicuous battle system are excellent.

Soul Hackers 2 is an unexpected but welcome follow-up to Shin Megami Tensei spin-off Devil Summoner: Soul Hackers, coming 25 years after its predecessor’s first release in Japan and 10 years after the 3DS remake that saw it eventually hit the west. Only five hours or so into the game, Soul Hackers 2 shows an engaging story with complex characters, a vast array of demons, and an immersive setting. The game is visually attractive, features a good soundscape, and includes many features that fans of Shin Megami Tensei or Persona will recognize instantly, such as a top notch turn-based battle system and the ability to recruit demons.

The story mixes technology, demons, and an apocalypse in a satisfying way. Players take on the role of Ringo, an agent of Aion who is tasked with saving the human world from destruction, with Aion being a superintelligent, digital entity that oversees humankind. Since Ringo is a digital being, she receives a human body to be able to interact with humans. She is accompanied by Figue, another agent of Aion who aids Ringo by providing her with information. Shortly after they arrive in the city, the duo recruit three Devil Summoners: Arrow, Milady, and Saizo. The three were initially killed by others but are now linked to Ringo after she hacks their souls in order to revive them. Their deaths come as a reuslt of the machinations of a man named Iron Mask, who is trying to get control of the Covenants, mysterious forces that live inside human souls. The premise does a great job raising interest in finding out what is going on and who is behind the mask. Ringo herself is a very likable protagonist, and the rest of the main cast have inviting, secretive backstories for why they elect to follow Ringo. 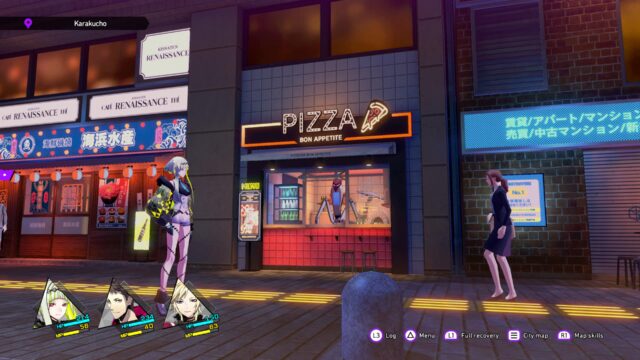 Is that a robot baking pizza?

Exploration is one of the key elements of the game. This cyberpunk version of Japan has many places of interest, and it is remarkably easy to go back and forth between them using the fast travel option. It is divided into realms, and players can buy diverse objects in its many stores and take on requests to help the people. There is a safe house where players rest and have meals, which grant certain abilities that are really helpful to explore dungeons. Dungeons are sectors of the city, such as an abandoned railway or an empty shopping district, where demons roam. Enemies are shown in the map, with combat beginning in the moment that Ringo touches or is touched by them. Ringo can run from enemies or slash them to gain an advantage in battle.

The turn-based battle system is very similar to what players have seen in entries of the parent series, but with some refreshing differences. The tweaks are subtle but excellent and give Soul Hackers 2 a distinctive touch. To start, exploiting an enemy’s weakness doesn’t grant additional turns, but it allows players to have a powerful attack at the end of their turn called Sabbath. Each demon that exploits a weakness prepares for the Sabbath; the more demons joining the attack, the more damage dealt. In addition, there is a chance of triggering an ability during Sabbath, such as recovering MP, if demons have them available. Elsewhere, there are fewer elements with light and dark removed, but status ailments play a more important role. Finally, it is not so easy to swap demons during battle, so that forces players to plan which demons they are equipping. All these elements offer newcomers and old fans a very enjoyable and distinct experience within the wider franchise.

Each party member has a COMP, which is a gadget used to summon demons. Each character can equip one demon, which affects their status and abilities. In addition, players can equip an accessory to raise defense and sometimes other attributes, while objects called mystiques can enhance affinities or provide other effects. Certain mystiques, for example, can cause healing skills to cost less MP or fire skills to deal more damage. Demons are recruited, but unlike other games, players don’t make these negotiations during combat. Instead, there is a new feature known as Demon Recon where the demons in the party scout, finding items, money, or other demons who want to join the party. Negotiations are really straightforward, and demons only ask for something in return to join, such as money, an item, HP, or MP, which makes it a straightforward process. 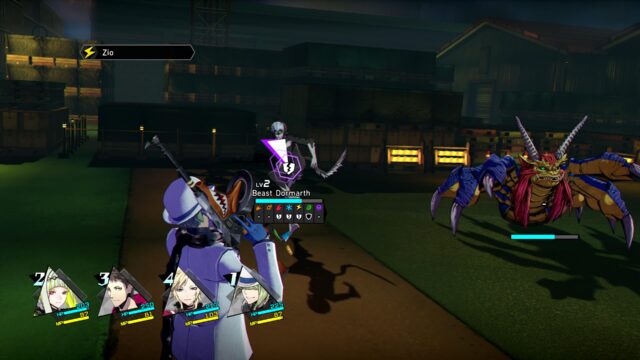 Time to exploit the enemy’s weakness.

The graphical style in Soul Hackers 2 is definitely distinct. It has a peculiar palette of colors and neon tones that give the game a different vibe to other titles in the Shin Megami Tensei family. The models of the main characters are very detailed, and demons and dungeons look good too. The cyberpunk version of Japan is appealing, and the animations during combat are great. The soundtrack is varied, including tunes with female vocals, electric guitars, and jazzy tracks. Voice acting so far is really good and convincing, and the overall audiovisual experience is an immersive one.

While it’s early days, Soul Hackers 2 feels like a marvelous way to dive into the Shin Megami Tensei franchise. Not only is the story engaging and the art alluring, but also the tweaks to the conspicuous battle system are excellent. At the moment, the game seems like a strong spin-off that fans of Shin Megami Tensei and Persona also shouldn’t overlook.