Dungeon Defenders: Going Rogue is a new direction for the team, placing fun and experimentation forefront while not forgetting the tower defence roots the franchise is known for. The fast-paced action will be easy to pick-up and play, particularly with a group of friends, but hard to master.

Chromatic Games is making a splash by returning with a new twist in Dungeon Defenders: Going Rogue.  Releasing on Steam Early Access today, players will see a game that foregoes the classic Dungeon Defenders formula for a 3D action roguelite hack-and-slash.  RPGamer was given the opportunity to sit down with CEO Augi Lye and take a hands-off look at the game in action through a few waves of enemies and boss fights.  Some aspects of tower defence remain through protecting a crystal from waves of enemies but the game takes an up-close and personal approach with an over the shoulder camera angle as players gain loot to customize their characters.  With waves breezing by and runs ended in an instant, this is going to be a faster paced Dungeon Defenders than players are used to, but with enough visuals and call backs to the series to bring in fans both new and old.

In Dungeon Defenders: Going Rogue, players pick one of the four classes available and can hop in to play with friends in up to four-player co-op on up to twelve different maps featuring three different boss arenas.  The four classes available at launch will be the melee-minded Squire, the long distance attacker Huntress, with long distance support and magic coming from the Apprentice, and melee-support with the Monk.  Finding the right class mix will be important as the game is difficult.  With maps that change for every wave and randomized enemies within, each playthrough will be a different test for players.  After each wave, players gain the ability to increase their skills via runes and equipment that drop from enemies in the form of treasure chests after combat has finished.  Loot scales with players and lower levelled players that join with endgame friends will be able to gain experience quicker.  Equipment appears different visually on heroes as well making each one look and feel unique.  There will be plenty of runes to customize your characters, while also picking from a skill tree to further give choice.  Managing health while learning the best ways to use the new runes and skills will be important to make it through each wave.  Dying while in a group doesn’t mean game over either as players can be revived during waves using items or skills to bring them back. 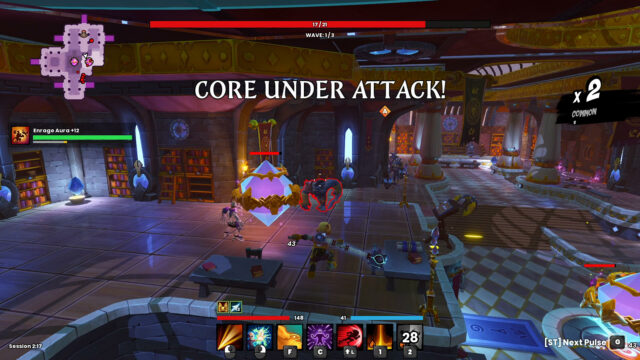 The game’s tower defence roots show in how enemies march down various paths that reach your crystal, and settling down to defend a route is definitely a plan, if playing with friends.  Playing with a less than full roster means that players have to juggle multiple routes, while protecting themselves and their crystal from falling.  Each wave is randomized with some enemy types making a beeline for the crystal while others relentlessly attack the player.  If the player is playing solo, they have a lot to juggle and the gameplay turns frantic very quickly.  The game does not slow down with more players either as the amount and strength of enemies will increase with additional players.

Boss fights are a more intimate affair with strategies and patterns to discern to help win the fight.  In the boss arenas, players gain access to environmental turrets.  On one of the earlier boss fights, players get access to an electric turret that zaps the boss, stunning it to deal damage more effectively.  Another boss fight is against series stalwart Betsy the Ancient Dragon and the environmental turrets there are ballista that help bring Betsy back to the ground to attack easier.  This is no easy task as players are also avoiding her fireball bombardment from the skies as underlings swarm the battleground.  Complicating matters, ballista are set on floating platforms that must be reached by jumping across chasms.  Future updates to the game are going to add more platforming sections, which is cool to hear as the fast-paced nature of everything and the platforming are two of the more unique features of the game. 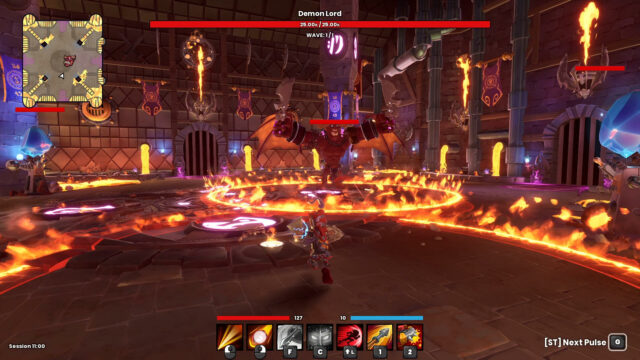 The game is adorable with Betsy looking great flying around the battlefield and giant skeleton characters looking like they are dancing while advancing to attack the player.  Backgrounds are well detailed with flags flying and castles seen in the distance, even if players rarely get to admire such sights due to the swarms of enemies that pour in.  During the presentation, there were four very different maps shown off with the crystal still set in the middle, with routes not always being an obvious or direct linear path.  There was a variety of enemies shown off too, with varying skills and tendencies ensuring plenty of possibilities.  The squire shown off swinging with abandon looked delightful as well, shifting side-to-side with an overgrown sword like a farmer swathing through wheat with a scythe.

An average playthrough at launch is aiming to take 12-15 hours, but since the game is a rougelite in nature, the ceiling on replayability is very high with plenty of runes and loot to try out.  Dungeon Defenders: Going Rogue aims to balance an easy to pick-up but hard to master level of difficulty to add to the replayability factor.  Progression is recorded by experience points saving after a run ends.  This experience is used to level up and get items to help start their hero on a higher footing then the run before.

Dungeon Defenders: Going Rogue is a new direction for the team, placing fun and experimentation forefront while not forgetting the tower defence roots the franchise is known for.  The fast-paced action will be easy to pick-up and play, particularly with a group of friends, but hard to master.  Between this, the large amount of randomized runes, and a robust skill tree, there’s a lot here ready for Early Access.  With the promise of more maps, bosses, and additional characters down the road, this looks to be a great start into something special for the company.