Just For Games announced it is partnering with Dear Villagers and Midgar Studio for a physical release of Edge of Eternity in Europe. The physical version will be available for PlayStation 4 and PlayStation 5 and will launch on February 10, 2022, the same date as its digital PlayStation 4, PlayStation 5, Xbox One, and Xbox Series X|S versions. A cloud-based Nintendo Switch version is also set to release on February 23, 2022.

Edge of Eternity released for PC in June 2021 and combines turn-based and tactical combat, using an ATB-based battle system as well as a combat grid and environmental interactions. The game is set on the planet Heryon, which is plunged into a war between its inhabitants and invaders from space, and follows siblings Daryon and Selene as they look to find a cure for an affliction called the Corrosion. The console versions will include all updates applied to the PC version, including its upcoming Japanese voice overs. 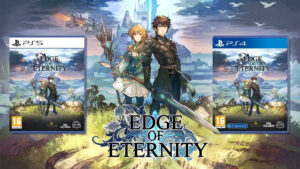