Welcome back to RPG Elements, the corner of RPGamer where we take a look at select merchandise related to the RPGs we love. In this edition of the column, we delve deep into Bitmap Books’ history of the JRPG, what inspired it during its infancy, its adolescent growing pains when attempting to leave the nest and strike out into the wider world, and even the legacy it left behind for future generations after maturing, with hundreds upon hundreds of detailed examples, both famed and obscure. 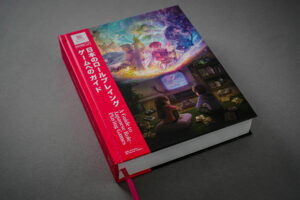 All images courtesy of Bitmap Books

A Guide to Japanese Role-Playing Games

Even among the stable of publisher Bitmap Books’ other available titles (such as The CRPG Book, which we previously reviewed), A Guide to Japanese Role-Playing Games is more than just a reference work, it’s an experience. At 652 pages, it’s longer than every other volume currently offered on the publisher’s storefront, many of which routinely clock in at 400-500 pages. While some of those other titles fill their bulk with a focus on screenshots, this book is a treasure trove of text that’s meant to be read.

Those who have never placed an order with Bitmap Books can do so in the knowledge that their investment will be treated with care and arrive quickly and in mint condition. The publisher’s shipping procedure is not only fast (three separate deliveries, all overseas, have typically taken only days to around a week to arrive) but also gentle to its contents. Each book is wrapped in multiple layers of protective covering to keep the hardcover surface pristine, and each of the book’s corners is safely embedded in sturdy L-shaped packing foam pieces, which wrap a good distance around the book to boot. The cardboard outer packaging includes further protective flaps that protect the shipment from any accidental bumps and collisions during transit.

The book itself is, of course, quite heavy, so a table or other surface to use during reading is recommended. The binding is thread-sewn, and includes a bookmark ribbon for placeholding between sessions. The front cover artwork by Stephanie Sybydlo harkens back to the magical feeling many of us had during our childhoods when discovering video games — and the unending sense of adventures contained within them — for the first time. It’s a beautiful addition to any video game book collection, and the Japanese lettering on the front cover even gives it an extra bit of authenticity. In terms of space, it has the same height measurements as The CRPG Book, and together the two books make great shelf partners for any RPG enthusiast’s game room.

The book is credited to Kurt Kalata, founder of sites such as Castlevania Dungeon and Hardcore Gaming 101. But covering well over 700 games would be impossible for one person alone. The book contains contributions from over 30 individuals (including RPGamer’s very own Elmon Dean Todd), all listed and credited to their corresponding articles immediately following a brief table of contents and introduction. However, Kalata still does the lion’s share of the heavy lifting, so it’s no exaggeration to say that this book represents a true labor of love for him. Individual game write-ups are a cross of game summary and review, looking at aspects like graphics, soundtrack, and gameplay. Interesting anecdotes about the games’ development or the teams behind them are also included, as applicable. It’s all handled in an informative yet conversational tone that’s easily accessible for any reader.

The book gets its formalities out of the way early. The first thirty pages are dedicated to some very interesting essays revolving around JRPG culture. The first order of business is to answer the all-important question of what a JRPG actually is, not just for clarity’s sake but also to put what’s contained within the next 600-plus pages into proper context. Rather than interspersing bits of historical trivia throughout the book, a seven-page article next breaks down the history of the JRPG, from its ’80s PC origins, across various console generations, and finally to the modern era. Lastly, a handful of other essays discuss the oftentimes troubling process of game localization, the importance of JRPG soundtracks, the influence of anime, and even some common tropes found in the genre. By the time we approach page thirty, however, we’re ready to jump into the meat of the book.

A Guide to Japanese Role-Playing Games is organized in a unique way. Rather than simply going in chronological or even alphabetical order (though there are some attempts of the former within several self-contained sections), the book groups games together based on themes. The first proper chapter, then, covers early Japanese PC RPGs, many released during the 1980s, at a time when the concept of JRPG wasn’t necessarily a thing yet and was still trying to establish its own identity. Some of the earliest games included here still showed clear inspirations from Wizardry and Ultima before starting to evolve their own unique characteristics that led to the establishment of the genre. Many games here will be unknown to western audiences as they were not released outside of Japan and, as is the case in much of the rest of the book, series of games are often contained within a single entry (with some notable exceptions). Those interested in a more comprehensive chronicle of the JRPG can read about the Mugen no Shinzou and Tower of Druaga series, but also more familiar fare like Hydlide and curious oddities like a Seiken Densetsu released in 1983 without involvement from Square.

The next several chapters focus on some of the genre’s heaviest hitters in greater detail than the rest of the book allows for. Big franchises like Dragon Quest, Final Fantasy, Shin Megami Tensei/Persona, and Tales of each receive a dedicated chapter, as does publisher Nihon Falcom, particularly for its Ys and Legend of Heroes franchises. Whereas the rest of the book tends to group franchises together, these titans have been afforded much more valuable real estate, with individual entries and even spin-off titles receiving separate single- or double-page write-ups.

The next chapter is the longest in the book, simply titled “Other Franchises”. Its 200-plus pages take on the task of covering many well-known franchises in depth, occasionally sticking to a particular developer for several entries in a row to preserve at least a little organization. (A nine-page index at the back of the book is really the only way to reliably find a particular game within.) If you’ve heard of a JRPG franchise, it’s probably in here somewhere. Included are many titles, such as Xenoblade/Xenosaga, Square’s Chrono Trigger and SaGa series, Mother, Phantasy Star, Lufia, Lunar, Suikoden, and Grandia. A few exceptions even receive lengthier write-ups, like Metal Max and Atelier. Even series like Mario and Mega Man, not primarily known for their RPGs, receive several dedicated entries thanks to their spin-offs into the genre.

The book closes — although “closes” may not be the best choice of words for the last 200-odd pages — with six chapters covering any games not included in any other chapter, organized by subgenre: action RPG, strategy RPG, first-person dungeon-crawler, roguelike, monster-collecting RPG, and the remaining miscellany like MMORPGs, sports-based RPGs, and send-ups of the genre like Undertale. Included in these sections are write-up of the Kingdom Hearts franchise, Rune Factory, Final Fantasy Tactics, Disgaea, and the SoulsBorne games. Even the age-old question “Is Zelda an RPG?” is addressed here in a two-page series write-up included at the very beginning of the action RPG chapter. Fire Emblem, Shining Force, Yakuza, Pokémon, Super Robot Wars, Nier, and Wizardry are also contained here.

Overall, A Guide to Japanese Role-Playing Games is so expansive, and of such high quality, that finding anything to criticize is rather difficult, and is akin to nitpicking. The presentation follows Bitmap Books’ standard of high-quality glossy paper, which the many included screenshots really benefit from. The smooth finish gives even turning the page a pleasant sound, and each chapter begins with an original full-page pixel-art image resembling an overworld map relating to the chapter’s theme. Depending on the game, there are some cases where the screenshots selected are a bit dark, and this makes viewing difficult without a good light source, particularly the smaller images, though they do pop quite nicely in the book’s free PDF download, included with the purchase. And with such a mountain of text, it’s not surprising that the odd “of” may be missing, or two words swapped around here or there.

Verdict: It’s no surprise that the first printing of A Guide to Japanese Role-Playing Games completely sold out. (At the time of this writing, Bitmap Books is gearing up to make a new printing of the book available via its website.) It’s an exhaustive reference for any lover of the JRPG genre, from those who are eager to reminisce about the games of their youth as well as more recent titles, or those curious about Japanese-exclusive releases they’ve never seen. It can easily be read cover to cover or by using the game index to jump around. However, it’s just as much fun to simply bite off an hour of time on an evening, crack open the spine, and simply page through a bit, stopping here and there to rekindle some old memories, flesh out your backlog knowledge, or find inspiration for what JRPG to tackle next.

Disclosure: This article is based on a free copy of the book provided by the publisher.