Welcome back to RPG Elements, the corner of RPGamer where we take a look at select merchandise related to the RPGs we love. In this edition of the column, we take a road trip through four decades of CRPG history, making hundreds upon hundreds of stops along the way to learn about landmark victories, curious oddities, and baffling miscalculations of game design and read about the CRPGs that paved the road, those that followed, and even those that never came to be. 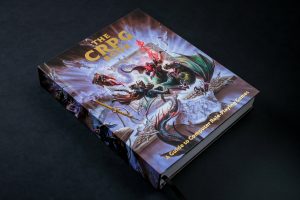 Webster’s Dictionary defines a coffee-table book as “a large expensive book with many pictures placed on a table for people to look at in a casual way”. Wikipedia adds that it also serves “to inspire conversation”. The CRPG Book is, for the most part then, a coffee-table book, as its robust and attractive appearance certainly attracts attention, though there’s little about it that’s casual. After poring over its contents for the better part of two weeks, I can also attest that it will absolutely inspire conversations…well over four hundred conversations, to be precise, one for each computer RPG covered in detailed, well-researched spreads comprised of one or two pages, complete with illustrations.

The CRPG Book is a visible labor of dedication and love, with 119 volunteer contributors toiling for four years to assemble an exhaustive treasure trove of CRPG coverage. Helmed by editor Felipe Pepe, who also contributed a large number of articles himself, the entire project spans forty years’ worth of RPG history, from the early university campus mega computers used by faculty and students alike to house prototype RPGs that pioneered a genre, all the way to the burgeoning indie scene, crowdfunded game campaigns, and digital distribution of today that has redistributed the creative power from big-name publishers and developers and put it right back in the fans’ hands.

All that content comes bound in a substantial hardcover casing, with a gorgeous piece of original artwork by Jan Pospišil wrapping around the spine and to the back cover. The tome carries with it a hefty weight of just over four pounds, which helps cement its prominence but also makes it impractical to read without a nearby flat surface to rest it on. A full-length PDF version of the book is, however, included in the purchase price, so portable reading is still possible. An attached ribbon makes marking progress, or a particular game of interest, simple. All 528 of the book’s pages are of an extremely durable thickness, with a satisfyingly smooth texture that adds a glossy finish, particularly to the many images included.

There are thousands of full-color screenshots and images reproduced here, on average five to six screenshots for each two-page article — which accounts for the majority of them — and around two to three images for each shorter, single-page review. Every major section of the book begins with a full two-page graphical spread against a black background that is quite attractive. It’s important to note, however, that the true aim of the book are the written reviews themselves, not the artwork, so screenshots included for each game are supplementary in nature without necessarily being particularly representative of specific features of the game or as being especially beautiful to look at. Their smaller size, too, makes it clear that they are not the star of the show here; the PDF version of the book does, however, make it possible to zoom and enjoy the images to your heart’s content.

The CRPG Book is useful to three distinct types of readers: Casual fans can use it to easily find relevant information on a large number of well known titles, glimpsing the ins and outs of a game they’re perhaps interested in, or using it as a resource to find a worthwhile new game to purchase and play from a digital storefront. Hardcore enthusiasts can dig deep, following long-running series that are chronicled here like Ultima, Might and Magic, and Wizardry, just to name a few. Those with a more modern mindset will find enjoyment in the dissection of series such as Mass Effect, Fallout, Elder Scrolls, and Dragon Age.

Finally, there’s the third type of reader, the one this book seems particularly aimed at: gaming historians. The CRPG Book contains several resources that stretch beyond the main attraction of the reviews. Following the regular housekeeping of an introduction, a list of contributors, and a table of contents, the book opens on several short-form essays, ranging in subject from the importance of self-taught cartography in the early wave of games, to the historical nineteenth-century forerunners to both tabletop and computer RPGs. A particularly interesting article posits that gamers themselves have evolved over time, and explores the ramifications of modern youth interfacing with what’s known as “old-school game design”. Skip to the back of the book and there is an additional chapter covering the birth of Japanese RPGs, fan-translated titles that were never officially localized, and some games that flat out never saw the light of day. Top RPG lists, an extensive selection of recommended further reading, and an RPG glossary round out what’s essentially more than a simple resource but a cover-to-cover feast for gaming historians interested in tracking the evolution of the genre over time.

The meat of the book, though, is made up — of course — of the game reviews. All games are listed chronologically, separated into eight chapters that each cover five years, beginning in 1975. Of course, the early days had less games to make the cut, so those chapters tend to be shorter, with the period between 1975 and 1979 only covering four titles over ten pages, while the final period of 2010 and 2014 covers fifty-eight games across eighty-nine pages. Each of these chapters begins with a full-page summary of the state of industry at the time, as well as listing some current trends and a timeline with major milestones of those years, such as important hardware and software releases. These two opening pages really set the stage for each chapter, and help the reader approach what they are about to read with the right historical mindset; in this way, we learn important context for the games of the era, such as the video game crash of the ’80s, the arrival of CD-ROMs in the early ’90s, or the dot-com bubble a few years later.

With that many titles represented, the selection attempts to cover a little bit of everything, from the names you know (Diablo, Baldur’s Gate, Knights of the Old Republic, The Witcher) to more eclectic choices that may be new to many readers (Super Columbine Massacre RPG!, Anachronox, Yumina the Ethereal). Several choices represent cross-overs between genres (Quest for Glory, Magical Diary), and even JRPGs make the list in some cases where PC ports were eventually published (Final Fantasy VII, The Legend of Heroes: Trails in the Sky, Valkyria Chronicles). Of course, as time went on and development costs grew, there was much more of an effort at producing a single game for every available platform, so later chapters feature a large number of games that might be better known as console titles instead (Jade Empire, South Park: The Stick of Truth).

With well over a hundred contributors represented, it’s no wonder that a plethora of individual writing styles are present throughout the book. Particular authors may incorporate personal anecdotes more frequently, while others adopt a more just-the-facts approach. There are not just clinical summaries of a game’s systems, either, but praise and critique are meted out wherever appropriate, and it will be easy for readers dedicated to poring over the book’s contents thoroughly to develop a preference for certain contributors. Select games feature some bonus information, such as parallels drawn to prequels, sequels, and spin-offs, as well as a listing of recommended mods for those games with a noteworthy library of mods that players looking to experience the game in question for themselves will find extremely handy. However, due to such a large amount of contributors and content and despite the editor’s and publisher’s best efforts, the book also comes with imperfections in the written text, the most frequent being a word missing from a sentence here or there, or an incorrect tense used. While these errors do pop up and must be mentioned, they do not break comprehension or become a major distraction.

Verdict: The CRPG Book is of high quality both inside and out. Everything from the binding to the artwork to the layout is colorful and inviting, with the result being something that can be proudly placed in plain view when a group of gaming friends come over for a visit. However, there’s so much more here to love than surface level, as the content itself is exhaustive, user-friendly, and entertaining. During my first leisurely trek through, I stopped and eagerly explored well over fifty of its reviews, not to mention its various timelines, trends, and other articles, and I fully anticipate starting back at the beginning and enjoying all it has to offer. Genre historians, casual CRPG dabblers, and anyone in-between will find lots to love within it.

Disclosure: This review is based on a free copy of the book provided by the publisher.