Welcome back to RPG Elements, the corner of RPGamer where we take a look at select merchandise related to the RPGs we love. In this latest edition we take a look at two art books imported from Japan: Xenoblade Chronicles 2 Official Artworks: Alrest Record and Utawarerumono: Mask of Deception / Mask of Truth Official Visual Collection. 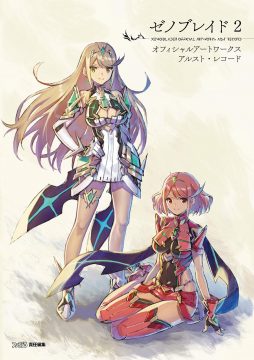 Nintendo, Monolith Soft, and Kadokawa have teamed up to release the official art book for both Xenoblade Chronicles 2 and its standalone prequel expansion Xenoblade Chronicles 2: Torna ~ The Golden Country in Japan. First and foremost, it’s one that those who can read Japanese will get the most out of, with illustrator comments and factoids accompanying the majority of pages. There is also a section in its final fifty pages that provides a brief synopsis of the stories of both games along with every line of battle dialogue and the Heart-to-Heart events. These are all welcome things, but are lost on those who can’t read the language.

However, the visual content is still very much plentiful. The book begins with around twenty-five pages of bonus art, including some blatant fanservice, before diving into two-hundred pages of character art. All of the characters of any importance, including all of the rare Blades, get between two to four pages devoted to each of their designs, with sections on the minor NPCs and weapon designs wrapping up the block. It’s good to see all of the characters getting enough time devoted to them, though arguably there could be a bit more time spent on the history of the most important cast members, if not all.

This is followed by forty pages on stunning beautiful, though compacted, world design pieces. These really speak to the effort that went into making Alrest a visually stunning place to be in. These arguably have many of the most breathtaking pieces of artwork, though unfortunately the fact that there are so many images put into a comparatively small section of the book means they can’t quite be as appreciated on an individual level as some may like. The book is rounded off with various item and furniture designs, covering the remainder of the pages until the aforementioned text-heavy Extra section.

Xenoblade Chornicles 2‘s Official Artworks will certainly be appreciated by any fan of the games. Looking over all of the designs provides tons of fond memories of the games and and seeing some of the earlier designs of all of characters and portions of the world is a neat touch. Japanese readers will get the most out of it, but those not wishing to wait for an English version, which it has to be said is far from a guarantee, will find it worth the import.

Verdict: Though some of the text elements will be lost on non-Japanese readers, the sheer amount of gorgeous artwork makes this still highly enjoyable to look through for fans of the game. 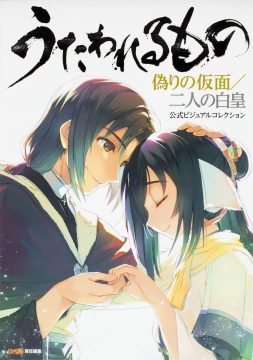 It always seemed a waste to just order one thing from Japan at a time so while ordering the Xenoblade Chronicles 2 artbook, I also picked up the dual art book for the Utawarerumono: Mask of Deception and Utwarerumono: Mask of Truth duology. The Utawarerumono Visual Collection is more import-friendly, being even more about the pictures, with just some small Japanese introductions to the characters and pointing out specific items in the world design section making up the only text of note.

Like the other title in this column, the book begins with bonus artwork, this time around 50 pages’ worth that goes even further towards the fanservice side of things. It then moves onto the character section, where there is first a full-page full-body design for each character followed by the collections of facial expressions that appear during the visual novel sections of the games. It then does go more into the design process behind all of the characters, in particular their clothing, before quick looks at the monster designs and finally some line sketches that show the designs behind the cast’s various attack animations.

Those parts cover roughly two-thirds of the book, after which it spends another 60 pages or so going through all of the artwork used in the event scenes throughout the games. It offers a neat reminder of all of the important scenes from the duology, some of which are, again, more fanservicey than others. The final 40 pages focus mostly on the world design elements, including locations and a selection of important items and symbols, with the final few offering some quick storyboards of a small number of events.

The book is certainly one for those who prefer their art books to be on the picture-heavy side of things. The other side of that is that there’s isn’t too much new to be gleaned from it from a reading perspective, though that arguably makes it more of an import-friendly proposition.

Verdict: It’s another art book that will be highly appreciated by fans of the games. As one that is almost wholly focused on the visual side of things, it is highly import-friendly but readers shouldn’t expect much additional information to be gleaned.