There is a definite natural encouragement for players to work together, such as outflanking enemies, as those who do go off on their own are quickly defeated by greater numbers.

RPGamer was recently given the opportunity to attend a new virtual preview event for Amazon Games’ MMORPG New World. The event let those present sample the game’s PvP Outpost Rush mode as well another of its five-man Expedition dungeons.

Most of the gameplay elements on show have already been covered in our previous two impressions, so in this article we will primarily focus on the Outpost Rush. The mode is different to the 100-player attack-versus-defence War encounters and sees twenty players on each side wrestling for control over three outposts between the sides’ camps. Zero-to-three points are awarded to each every few seconds based on how many of the outposts they control, with the first to reach a hundred declared the winner.

Outpost Rush is more than just charging to these points to claim them, and there are multiple levels of strategy at potential play. Players can collect resources from the large map, which are used to create and repair defences on the outposts, such as gates and ballistae. In addition, a boss will spawn on the map, with the rewards for defeating her being a temporary freeze placed upon the other team’s score. Our group of players was given a high level character with the ability to easily generate a powerful character build focusing on a weapon type of choice. 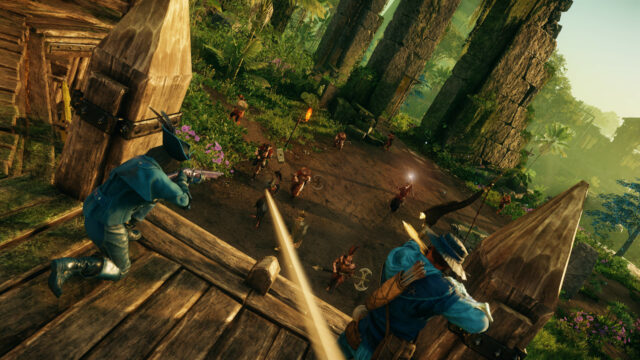 Players will definitely want to coordinate their outpost assaults.

It’s clear to see synergy between players with different character builds, as the heavy melee hitters quickly make their way into the thick of the action and ensure the more vulnerable ranged characters aren’t picked off. There is a definite natural encouragement for players to work together, such as outflanking enemies, as those who do go off on their own are quickly defeated by greater numbers. If players are defeated, there’s a chance of being revived by allies, but it’s much more likely will need to respawn back at camp before rejoining the fray. Our particular Outpost Rush was an enjoyable affair, helped by being largely competitive right up until the very end when the opposing side was able to establish enough of a stronghold over two outposts to cement victory. Newcomers to the mode may get a bit lost in the chaos at first, but there’s a definite sense that both player ability and smart strategy affect the action.

Meanwhile, the Lazarus Instrumentality Expedition was along the lines with what one comes to expect of an MMO dungeon. Players travel through, defeating the various monsters inside, solving occasional light environmental puzzles, and defeating mini-bosses before coming upon the big boss at the end, though unfortunately time constraints prevented our party reaching the final part. There’s not much to say here that hasn’t already been said, but it is worth noting that the mini-boss we fought did well at introducing identifiable mechanics that require good reactions and thinking without too much prior knowledge coming in; having a few developers in the party may have ultimately been what swung things in our favour, however.

Ultimately, this latest event showed some more interesting elements, yet due to its brief nature, wasn’t able to answer the main lingering questions about the game, namely how it plays over an elongated period. The events so far have shown there is a strong combat system that successfully evokes the feel of action RPGs more than traditional MMORPGs and there are high potential PvP offerings available. However, a closed beta is currently running now until August 2, 2021, so those able to participate will gain insight sooner rather than later. New World fully launches as a buy-to-play title for PC on August 31, 2021.