Snapshot Games launched its latest DLC for strategy title Phoenix Point. Festering Skies is the third major DLC for the game and includes new story missions, cinematics, mission types, a new air-combat minigame, and more. It is available for PC and Mac through Steam, the Epic Games Store, and the Microsoft Store individually for $9.99, or as part of a $14.99 Expansion Pass that grants access to two future DLC. It will also be available on GOG.com and Google Stadia soon.

The launch of Festering Skies comes with the reveal of a new roadmap for future content and releases for the game. Regular monthly updates will continue to add quality-of-life upgrades and gameplay tweaks, alongside occasional free cosmetic items. The next, fourth DLC is titled Corrupted Horizons and is planned to launch in late summer 2021, with the fifth DLC to follow in winter. In addition, the game’s PlayStation 4 and Xbox One versions are planned to launch in Q4 2021. The console version will include all of the previously released DLC.

Phoenix Point is billed as a spiritual successor to the X-COM series, which was created by studio head Julian Gollop. The game is set in 2047 with Earth under attack from an alien force and players acting as the leader of a cell in a secretive organisation called the Phoenix Project. Phoenix Point was released for PC and Mac in December 2019 and for Google Stadia in January 2021. 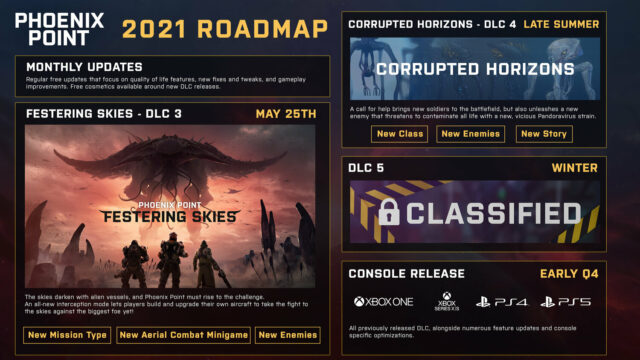