Famicom Detective Club: The Missing Heir & The Girl Who Stands Behind

As their titles suggest, Famicom Detective Club: The Missing Heir and Famicom Detective Club: The Girl Who Stands Behind were originally released for the Famicom in Japan back in 1988 and 1989, respectively. However, with Nintendo teaming up with Mages (largely known for visual novels such as Steins;Gate) for Nintendo Switch remakes of both games, western RPGamers have finally gotten the opportunity to join.

Both games put players in the role of a nameable, young assistant investigator at the Utsumi Detective Agency. Though The Missing Heir takes place two years after The Girl Who Stands Behind, it is recommended to play first as the The Girl Who Stands Behind is very much a prequel that feels like it follows on from the other title. The Missing Heir sees the protagonist waking up with amnesia after being found at the bottom of a cliff. He learns that he was in the middle of an investigation into the death of the matriarch of the Ayashiro family, with the plot driven by the protagonist discovering the cause of his amnesia and family conflict. The Girl Who Stands Behind dives into the backstory of the protagonist’s fellow assistant Ayumi and the protagonist’s investigations into the death of her high school friend. Although specific years aren’t given, the games are quite clearly set around their original release, as evidenced by the phone technology. 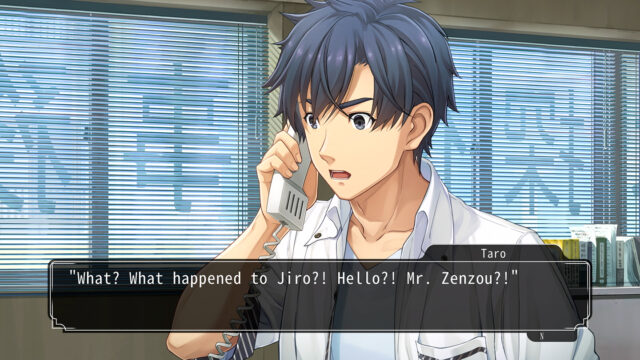 Everyone seems strangely happy to let an underage kid be the lead investigator on multiple murders.

Players advance the story by interacting with the various witnesses, persons of interest, and locations their investigations take them to. There are some point-and-click elements where players need to investigate locations, but by and large the games are primarily about activating the necessary conversational flags from the options available. There is some limited free-form nature to the gameplay, but both titles end up fairly linear with only a few points that put the onus on players submitting a conclusion themselves.

Some actions needed to progress aren’t the most logical. However, the possible options are limited enough that in cases where players may be stuck it’s possible to just select all possibilities within a few minutes. There are also some fun moments where the UI plays on the double meaning of some of its options, and the games always indicate new options that become available with yellow text instead of white. There isn’t anything like multiple routes or endings, though The Girl Who Stands Behind has post-credits “personality” and “compatibility” tests based on certain otherwise entirely superficial actions and choices made throughout the game.

The structure and story for The Missing Heir and The Girl Who Stands Behind ultimately works in both entries’ favour. The games do well in building up the underlying mysteries behind them and developing the threads of clues. The main protagonist doesn’t stand out much, but has just about enough behind him to work as enjoyable viewpoint character, helped by his increasing involvement with the characters in both games. While there aren’t many standout characters, the ensemble casts have the requisite secrets and personality traits necessary to make such murder mysteries engaging. 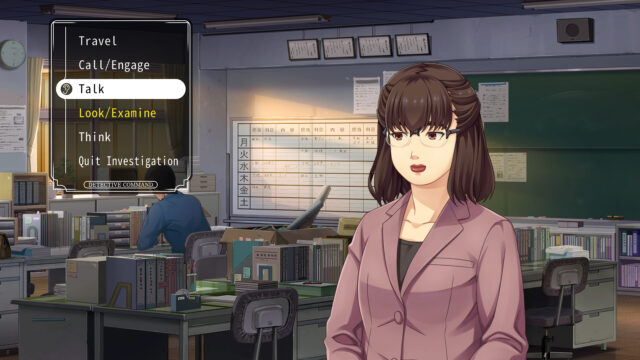 The game is all about interacting with persons of interest to activate the flags needed to advance the plot.

Neither title tries to do too much graphically, but the art style and backgrounds are sharp and work well in giving the game character. The Girl Who Stands Behind features more in the way of short animations to help add a bit more urgency into certain scenes, but it doesn’t feel like anything is really missing from either game. Instead, players get to take in the story and events, which move at a good pace, never getting too bogged down or feeling rushed. The audio aids the experience as well, with full Japanese voice acting and a solid soundtrack.

For those looking for playable murder mysteries, Famicom Detective Club: The Missing Heir and Famicom Detective Club: The Girl Who Stands Behind are easily recommended. Though neither game requires too much hard thinking on the part of the player, both feature entertaining stories and characters, with enough interaction and drip-feeding of clues to remain engaging throughout. It’s very pleasing to see Nintendo finally bringing them over to western audiences; adventure fans will find the games well worth their time, with neither feeling at all dated.