Shin Megami Tensei III Nocturne HD Remaster looks like a refreshed classic that will be acclaimed again by old and new generations.

Atlus has made a name for itself as a top-notch RPG developer worldwide, releasing games that have enjoyed an overwhelmingly positive reception in the last few years, such as the latest entries in the Persona series, which have come with a fulfilled promise of high quality. Based on this success, Atlus has been making an effort to bring back some of its older titles with ports and remastered versions, making them more accessible for new generations. The latest of these titles is Shin Megami Tensei III Nocturne HD Remaster, and RPGamer had the opportunity to try out the first few hours of the game.

Originally released in Japan in 2003, Shin Megami Tensei III has had different iterations. Nocturne HD Remaster was released in Japan last year and will be launching internationally for multiple platforms next month. It is the triumphant return of a highly acclaimed classic that received some quality-of-life enhancements. It took only a few hours to notice that, with better graphics and tweaks to some mechanics, the game set in a post-apocalyptic world gains all it needs to survive in our world without feeling outdated.

The game sees players naming and taking on the role of the protagonist, a high schooler. This young lad is supposed to meet his classmates Isamu and Chiaki at a hospital, but players have the freedom to explore Tokyo a little bit beforehand. At this point in the story, everything in the city looks normal, but chaos is about to change the world drastically. After arriving at the hospital, players find odd characters, such as Hikawa, a member of a demon-worshiping cult who is trying to force the Conception, an event never witnessed by humans, aimed to destroy the world so that it can be reborn. When this apocalyptic event occurs, the high schoolers find themselves trapped inside a world engulfed by chaos. With the advent of a demonic revolution, players’ choices will decide the fate of the new world. 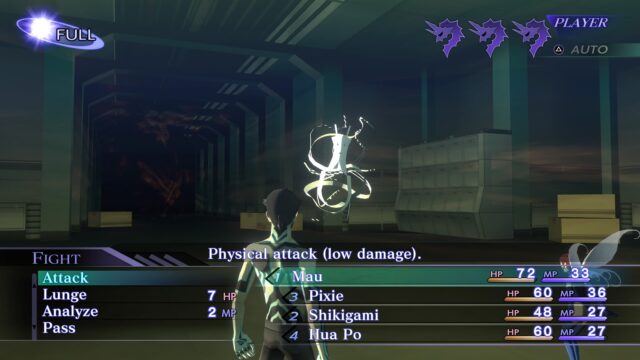 Demons come in all shapes and sizes.

The protagonist is fused with a Magatama, which turns him into a demon with the heart of a human, and is forced to roam a dying world full of mysteries and other demons. Hallways and rooms of the hospital are now occupied by wandering souls, demons, and strange denizens who are as likely to be foes as allies. Using the newly found demonic powers, players explore the city searching for answers and fight other demons, making alliances with some of them in order to survive. A post-apocalyptic version of Tokyo serves as an excellent setting, and the story is very intriguing because most of the characters provide enigmatic information, inviting players to progress to see how the plot unfolds.

Elements of the iconic turn-based battle system used in some recent Persona games have their origins in Shin Megami Tensei III. Besides attacking, players can use a vast array of abilities and items, summon or dismiss allies, and speak with enemies to negotiate with them. As a consequence, foes can join the fighting party, yet not all demons are easy to convince. Every demon comes with different stats, weaknesses, and abilities. While some abilities are used to deal physical damage, heal, or cause status effects, others are elemental, inviting players to exploit enemies’ weaknesses to off them faster. The protagonist learns new abilities by leveling up, depending on the equipped Magatama, which also grants stat enhancements and elemental strengths and weaknesses. The battle system is certainly a highlight, and befriending demons is a fun enterprise. 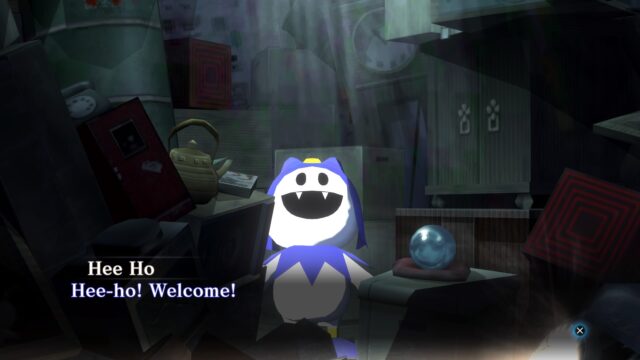 One of the franchise’s most iconic characters, Jack Frost, works in one of the shops.

Besides battling, one of the most enjoyable mechanics of this first glimpse of the game was exploring. Every place in the city has a lot of rooms with items and peculiarities waiting to be found. Additionally, players can find shops, rooms to fuse new demons, and fountains to heal, revive, or lift curses. Enemies cannot be seen while exploring, yet random encounters are indicated by an indicator that changes color: when it turns red, battles begin.

The game’s art is remarkable. Demon models are spectacular, and with improved graphics upon already great art designs, the result is very satisfying. Well-performed voice acting is accompanied by a soundtrack full of catchy tracks with distorted guitars. The game not only has aesthetic enhancements but also comes with some good new traits: a refreshed localization done by the original team that worked on the PS2 version and tweaks in the saving options. Besides the cylinders located in specific places used to save the progress, a new suspend save option was added, which works as a quicksave that can be used at any moment. Difficulty can now be changed at any moment of the game, with the Merciful Difficulty add-on, which makes battles significantly easier, included in the Deluxe Edition, which also includes a pack that features Dante from Devil May Cry.

The introduction promises a great turn-based RPG with a solid story. Shin Megami Tensei III Nocturne HD Remaster looks like a refreshed classic that will be acclaimed again by old and new generations. With only a few hours inside the game, I can’t wait to see what surprises are hidden in this story set in a post-apocalyptic Tokyo. The game will officially launch on May 25, 2021, for PC, PlayStation 4, and Nintendo Switch.