NIS America announced that void tRrLM();++ //Void Terrarium++, the PlayStation 5 version of void tRrLM(); //Void Terrarium, is heading to North America and Europe. The game will launch in North America on May 18, 2021, with the European release following on May 21, 2021. A limited edition is available to pre-order from NIS America’s Online Store for $54.99 that includes: 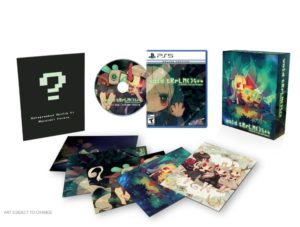 The most recent title from A Rose in the Twilight and htoL#NiQ: The Firefly Diary director Masayuki Furuya, void tRrLM(); //Void Terrarium is set in a world contaminated by toxic fungi, with players following the last known human, a girl named Toriko, and her helper robot. Players are tasked with maintaining their isolated “Terrarium” environment and protecting it from being taken over by the fungi. The void tRrLM();++ //Void Terrarium++ version adds new outfit options for Toriko, as well as additional illnesses and new terrarium actions. Those looking to read more about the game can check out RPGamer’s Deep Look of the Nintendo Switch version.