Initially, the tutorials of the many systems were a touch overwhelming but quickly revealed an otherwise engrossing presentation.

As part of PAX Online, developer Tactical Adventures released a demo of Solasta: Crown of the Magister, a party-based tactical fantasy RPG scheduled to release on Steam Early Access on October 20, 2020. The game was successfully funded on Kickstarter in 2019. After checking out its PAX Online demo, I am eager to venture forward into the world of Solasta when the game comes out next month. The game boasts an atmospheric soundtrack, impressive character builder, and a crisp graphical style.

Players are first given an opportunity to create a character, providing a glimpse of the many options available in the full version. Options include choosing from five races, six classes, and eight personal backgrounds which determine available personality traits. While these characters cannot be used during the playable demo, I was impressed by the depth of the builder, which should allow gamers to personalize their gaming experience.

As for the demo itself, it features a four-character party traveling through the Ruins of Telema that come across a group known as the “Scavengers.” During this initial meeting, players are presented with a number of dialogue options ranging from sympathetic to curt. Ultimately, the heroes are tasked with infiltrating a nearby orc den. During the investigation the party quickly runs afoul of some large spiders, which provide the first taste of the battle mechanics. 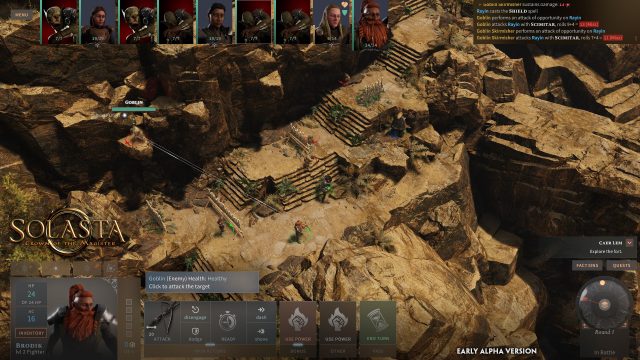 Players can take advantage of the topography in battles.

Solasta uses Dungeons and Dragons SRD 5.1 Ruleset. The game features a turn-based system, with characters placed on a grid and a turn counter on the top of the screen. The user interface is sleek with a modern design. The battle animations were pleasant to watch yet short enough to avoid feeling cumbersome.

Initially, during battles it felt there were almost too many ability and movement options to choose from. After the span of a few encounters, my party had established a rhythm which took full advantage of the ranged abilities. In one instance, my character was able to light portions of the environment on fire using a torch, causing damage to enemies. Magic spells were effective during battle and also a visual highlight of the demo. The demo featured serviceable voice acting and a variety of enemy types and locations.

After battle, the player is given an opportunity to rest at camp to recover.  I was short on curatives but the party was able to almost entirely recover using the resting function. My party eventually discovered the orc den, necessitating a shift to cautious mode to avoid detection. In this mode, the characters move slower and are harder to detect.  My party made a valiant effort to avoid detection, before being quickly swarmed with orcs.

Initially, the tutorials of the many systems were a touch overwhelming but quickly revealed an otherwise engrossing presentation. Solasta: Crown of the Magister will be launching on Steam Early Access on October 20, 2020. Players looking for high-fantasy tactical adventures can still sample the demo on Steam.