In this edition of the column we take a look at the indie mystery adventure The Haunted Island, a Frog Detective Game.

The Haunted Island puts you in the role of the Frog Detective, who is called by his supervisor to take up a strange case. On an island ruled by Martin, a sloth who crowned himself king, unexplained noises can be heard from crevices. The sloth’s first reaction is to call in a group of ghost scientists, who spend the next two weeks trying to figure out what is going on. Trying, but certainly not succeeding. That is where you, the Frog Detective, come in. Grab your magnifying glass and jump on a boat to do some wholesome detective work. 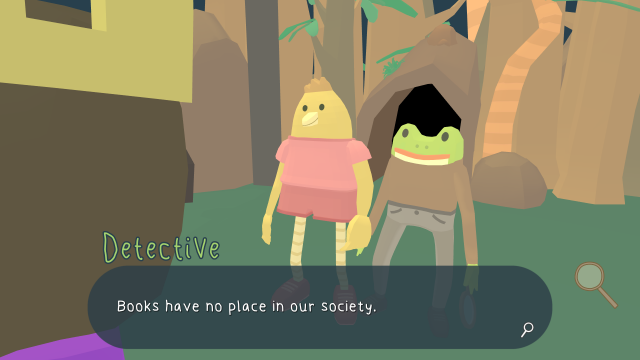 Our detective always has some nuggets of wisdom

Let’s first get the biggest thing out of the way. The Haunted Island is not a hard game and will entertain you for about an hour. That being said, it is the most fun I have had in quite a while with a videogame. For only a few Euros I had an hour of pure adventuring.

The game reminds me of an interactive version of a silly cartoon. All the characters are incredibly fun to talk to. You have Mo, the ghost scientist mouse, who is afraid to embarrass himself in front of you, because his friend MysteryMonkey, the ghost scientist monkey, thinks so highly of you. And then there is the ghost scientist sheep, who is disgusted by wool and people wearing anything woolen. This is where the charm of the game lies. Fun and lighthearted dialogue with these anthropomorphic animals, so you can collect clues to find what is really haunting this island. 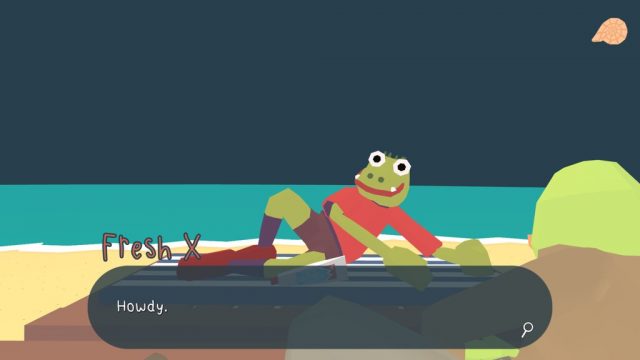 Fresh X has a day off and some glorious teeth

Gameplay-wise, the game is a simple trading sequence quest. One character needs a magnet, so you find him one and now you are in the possession of a big shell. Then you talk to another character who is in dire need of a big shell and offers you a trade, and so on. Accompanied by a jazzy film noir soundtrack, you uncover the secrets of the haunted island.

Humour is hard to pull off and this game does a great job in doing so. Not only the characters, but also the notes that can be found around the island, really presents the great silliness that is The Haunted Island, a Frog Detective Game.