The new major content additions come in the form of Seasons, which offer an overhaul of the game’s Challenge system. The first of these Seasons will launch in the summer and will be available to all players. It will see players access a new main menu option, which will take them to a unique progression screen based on a board game. Completing in-game activities will award S.C.O.R.E. points that go towards advancing through the board and ranking up, and in turn providing in-game rewards such as items, outfits, currency, and more.

Bethesda is currently planning to have four Seasons per year. Each Season will run for ten weeks, with a couple of weeks’ break in-between. Each Season will have its own theme and set of rewards. Other additions planned for this year include new high-level Perks, team-matching improvements, new events and story content, and more.

Fallout 76 was released in November 2018 for PC, PlayStation 4, and Xbox One. The game is set in 2102, twenty-five years after the nuclear assault that turned America into a wasteland. Players control dwellers from the titular Vault 76 in West Virginia, tasked with reclaiming and rebuilding civilisation. 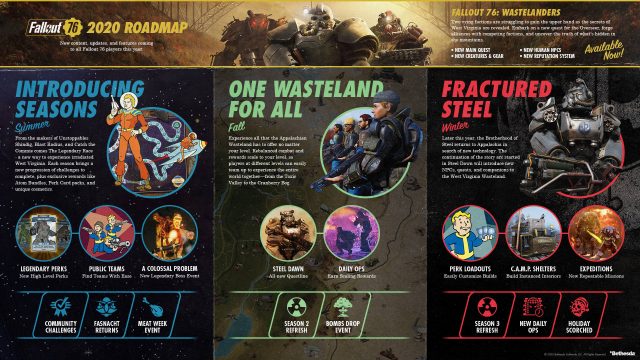