In this edition of the column we take a look at Neo Cab, available on multiple platforms including Apple Arcade, PC, Mac and Nintendo Switch.

What would it be like to be one of the only non-automated cabs in a city filled with oh-so-convenient automation?  Neo Cab, dubbed an emotional survival tale, aims to answer that.  Moving from small town to big city at the insistence of her best friend, Lina must quickly learn why the mood in Los Ojos is so intense, as well as how to manage her emotions…or suffer the consequences.

As one of the only remaining human drivers left in a city that has been taken over by the terrifying monocorporation Capra, who’s firmly in charge of technology, entertainment, communication, and even transport with a fleet of automated cars, Lina provides a unique service.  Though propaganda from Capra labels her as dangerous, it’s all obfuscation to hide the real truth: for the residents of Los Ojos, the 99.9% safety rating of Capra’s automated cabs only applies to recognizing other vehicles, and definitely doesn’t apply to darker skin tones; the fight over automated driving versus human drivers is in full swing by the time Lina arrives on the scene.  Being one of the few Neo Cab drivers on the night shift, repeat passengers will become a staple of Lina’s nights.  Because of this, she will get to know those whom she picks up frequently deeper each time they take a ride. 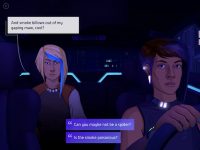 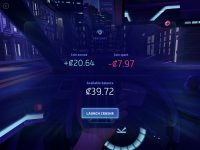 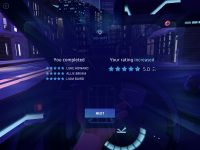 Lina will need to choose her words carefully as her passengers, stylized as pax, are sensitive to her moods, which are displayed openly on her FeelGrid bracelet.  Choosing the right answers for each rider’s needs results in a 5-star rating, and possibly a good tip.  However, getting into arguments or upsetting the pax will lead to a low star rating and no juicy tips.  Certain responses are only available if Lina is in the right mood — being sad for example can either add new options or lock out options, depending on the rider and how things are going.  Consistent low ratings will result in the Neo Cab company outright firing Lina, so keep that temper in check!

With 15 different passengers to pick up, and a maximum of four shifts per night, Lina will need to choose which rides she picks up, and making or breaking these contacts can change the game’s ending; with multiple talented writers each crafting a different passenger, they all do feel like individuals.  Each playthrough is fairly short, clocking in at about two hours, give or take fifteen minutes in either direction, so the game is highly replayable and how scary (or not) the city of Los Ojos turns out to be completely depends on the passengers Lina takes from one destination to another.  So, what are you waiting for, Driver?  Log in to the Neo Cab app and pick up a fare tonight.  — Anna Marie Privitere