It’s a worthwhile return trip to a blasted Earth, and the kind of thing I’d love to see integrated into the base game design for future outings in the franchise.

When Darksiders III first released late last year, it came across as a good-but-not-great continuation of the franchise. In the months since, it has seen several DLC releases, with the most recent, Keepers of the Void, arriving just last week. One of my main gripes about the base game was the emphasis it placed on fast-and-furious combat at the expense of satisfying dungeons and world exploration, save for a few late-game instances. Though the combat worked well and was entertaining in its own right, it just felt like something was missing from the overall experience. Thankfully, Keepers of the Void starts to right the ship in that regard.

Like the previous DLC, The Crucible, Keepers of the Void is a side mission presented to Fury by the demon merchant Vulgrim. It seems some stone marauders have taken up residence in the enigmatic dimension known as the Serpent Holes, used by both Vulgrim and the Horsemen to quickly navigate around the world in each game. Claiming that they restrict his movement within the Serpent Holes, Vulgrim ropes Fury in to dive into the Serpent Holes themselves and clear the other-dimensional squatters with promises of long-lost loot to be found in the Serpent Holes’ far reaches. 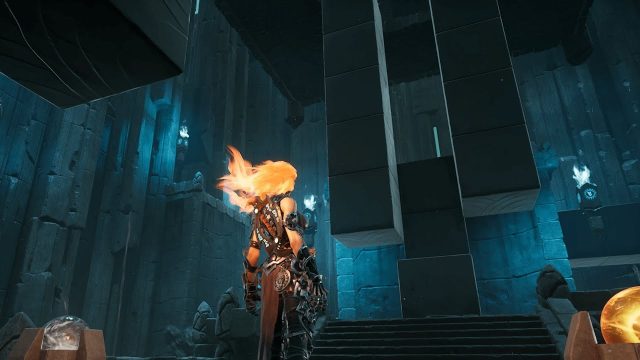 The DLC offers much more in the way of traversal puzzles.

The DLC functions as a separate five-to-seven-hour dungeon, known as The Void, completely removed from the rest of the game. It is split into four distinct wings, each one centering around one of the elemental Hollows that Fury picks up over the course of the base game: Flame, Storm, Force, and Stasis. This new location addresses a few of my previous misgivings with the game’s design, specifically its emphasis on combat over exploration and the lack of alien, otherworldly settings. Make no mistake: combat still plays a role in Keepers of the Void — the stone marauders are a new type of enemy, and there are a total of five bosses, the Void Keepers, to contend with — but puzzle-solving has been pushed much more to the forefront in the majority of the DLC. The visual design of a stone fortress ostensibly floating in a swirl of ethereal nothingness isn’t exactly mind-blowing, but it is distinct from the game’s other content and offers a chance to step away from the sewers and warehouses of Earth for a spell.

The DLC becomes available after receiving the Flame Hollow, the first of the four Hollows collected over the course of the game, but all four Hollows are actually required to completely traverse the Void. The majority of rooms feature some sort of puzzle to conquer, with many based around activating Void Orbs using one or more of the Hollow powers. Each Hollow has a different effect when used to strike a Void Orb — Flame moves blocks in set patterns around the room, for instance — and only one can be in effect at any given time, requiring a bit of consideration when going through multi-step puzzles, and offering constant satisfying payoffs as room after room is solved. Encounters range from basic trash mobs to a few pockets of challenging groupings of foes, while boss fights ramp up from a fairly simple first boss to genuinely challenging bosses later in the DLC, requiring sustained mastery of the reflex-based dodge system combat is based around. Unfortunately, much of the enemy designs, and particularly the bosses, lack the personality found in the base game, with them essentially just being hulking, bipedal rock formations; as the four Void Keepers are encountered, Fury even pokes fun at their stoic lack of personality and expression. 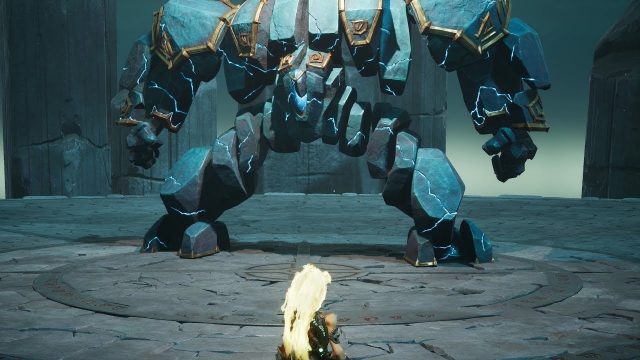 The bigger they are, the harder they’ll pound Fury into the dirt.

The final boss to whom all of this builds up to, at least, offers a bit more in the characterization department, and serves up a considerable challenge even for players sporting end-game stats. I found I had to make use of a consumable to reset all of my stat points in order to gear up properly for this fight, and even then victory was hard-fought and took some time to achieve. Keepers of the Void does offer some incentives to players that can be carried back into the main game. Defeating each Void Keeper offers an alternate secondary weapon for each Hollow, and there are new enhancement artifacts that can be found in hard-to-reach places off the beaten path. The main draw will definitely be the Abyssal Armor set awarded for clearing the final boss, which even carries over into new full playthroughs of the game. Considering that players will need to be at least near the end of the game before completing the Keepers DLC, most of its rewards will be rather fleeting, so it’s nice to have one permanent upgrade attached to the game in the end.

I had a good time with Keepers of the Void, and appreciated the feeling of puzzling my way through a dungeon, as well as the spike in boss difficulty by the end. Even though it doesn’t add much, if anything, in terms of lore or storytelling to the game’s world, it’s a dungeon experience that Darksiders III overall benefits from. It doesn’t have many long-term rewards for those that have already cleared the main game, but it’s a worthwhile return trip to the world of Darksiders III nonetheless, even if only for a few hours, and the kind of thing I’d love to see integrated into the base game design for future outings in the franchise.