Crimson Keep plays like a diet Skyrim, where it has a similar leveling and combat system, yet none of what makes it enjoyable.

Dungeon crawlers like Crimson Keep are a dime a dozen, dime a dozen, but while there are some outstanding ones like Pokémon Mystery Dungeon: Explorers of Sky, there are also much poorer ones like, well, Crimson Keep. Team Crimson’s effort feels like it is a first attempt at creating a game, and in the end feels underdeveloped and frankly not in a state ready to be released.

With that in mind, the game starts off with a introductory cinematic of a village being brought to its knees. After meeting a cataclysmic end, the story shifts to focus on what lies beneath the village, where monsters lurk and adventure awaits. The intro cinematic is underwhelming to say the very least, though at least the artwork fits the game well. Grim and gritty, the artwork gives off an ominous vibe fit for a post-apocalyptic setting. Sadly, that vibe is killed when the narration kicks in. The voice work comes off as extremely ham-fisted to the point it becomes humorous.

Unfortunately, that is only where Crimson Keep’s problems begin. While the art style in the intro works well, the in-game graphics look like something out of a budget PlayStation 2 game. An immediately jarring aspect is that the player character has hands with no arms. They just float there in air. Meanwhile, the environments are bleak and simply not interesting to look at. The textures appear flat and bland with no real definition to them. Monsters in the game have strange animations and that makes them look incredibly stiff. Lastly, though the user interface is at least navigable, it comes off as an afterthought rather than an integral part of the design. 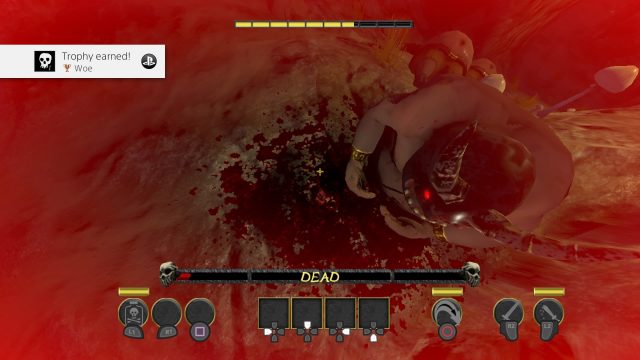 This game in general is just plain ugly to look at.

As far as gameplay goes, it does not get much better. Crimson Keep plays like a diet Skyrim, where it has a similar leveling and combat system, yet none of what makes it enjoyable. .  There are three classes that boil down to barbarian, mage, and scavenger. Barbarians are solely focused on melee combat, mages get a mix of magic spells and melee, while scavengers are just a wimpier version of the barbarian. All classes are given a hand axe to begin with, though the mage also gets access to a limited magic attack in addition. Combat comes down to a war of attrition as players swing their weapons or cast spells in an attempt to stay alive. To add a semblance of variety, upon leveling up players can learn new skills such as a freezing slash or poisonous cut. These do little to alleviate the overbearing fact that combat in Crimson Keep is stale and boring.

The other major aspect of this game is the dungeon exploration, provided players manage to get past Crimson Keep’s endless supply of cheap deaths. The dungeons, which range from generic underground mines to uninspired woodland, are just not interesting either. The whole blandness of the experience, in addition to the annoying methods of death, just making exploring a total drag.

One last note to touch upon is death, a reality that this game will make players face repeatedly as they go through Crimson Keep. Most, if not all the deaths feel cheap and unavoidable. One such enemy that will deal out death after death is the first boss, who can dish out one-hit kills. There are healing items, but they are so scarce and hard to find. Crimson Keep acts as a roguelike in this regard, so players are sent right back to the beginning to further the annoyance of a cheap-feeling death. 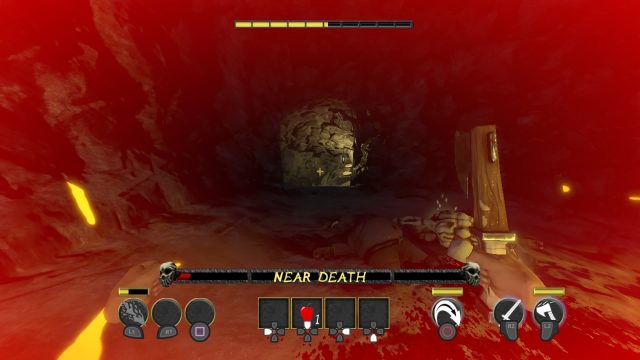 Another annoying factor is this red filter that makes surroundings so difficult to see.

With all of its issues, Crimson Keep is at best underdeveloped and at worst virtually unplayable, with nothing to draw players back to it. One would be hard pressed to find any reason to recommend it, even for those desperately looking for an action roguelike title.