Path of Exile Looks for Synthesis

Synthesis is geared towards giving players more control over two major elements: world areas and items. Synthesis is designed as a moderately story-focused expansion, and is geared around a new NPC named Cavas. Cavas is a spirit who has forgotten his past — though he clearly played in important role in the world of Wraeclast’s history. Players are tasked with helping him restore his memories by encountering and stabilising memory fragments. 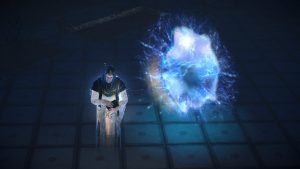 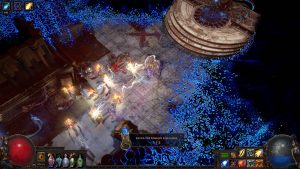 In the Challenge League, each world area contains a portal to a memory, which Cavas will open for the player. Once the player steps in, they must progress through the area as it decays, trying to tag the two-to-four memory stabilisers. Should the memory be successfully stabilised, players will then receive its memory fragment, which can be placed on the Memory Nexus, an area floating in the realm of Cavas’ memories.

At the Memory Nexus, players can find the Memory Map. The map features various nodes, which are the memory fragments collected from the aforementioned portals. Players will place memory fragments, which resemble game board pieces, as they see fit. Each fragment has a certain number of connections — based on the number of stabilisers that need to be tagged within — and the goal is to connect visible reward memories together so that they can be reached in a single run through the path of memories.

When players place a memory fragment, it has a certain number of runs before it decays and vanishes from the board, with the final run including the same decay effect that appears when it is initially stabilised into a fragment. Reward and boss memories, which appear randomly, will always decay after the first run. Those nodes that vanish can be replaced with new fragments, while the storyline related to Cavas progresses throughout the league. 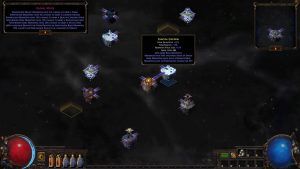 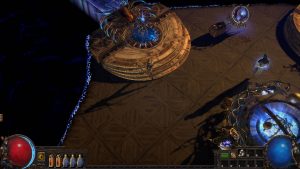 Memory fragments each have their own set of mods that affect the area, for example giving boosts to monsters or an increased chance to find rare items. Generally, those areas that provide greater challenges also provide greater rewards. Certain nodes will contain a special space known as a Memory Amplifier. These amplifiers can have various effects, with the example shown being one that doubles the effect of the mods of any fragment placed there. Some of the mods on memory fragments are global mods, which have an effect on the entire map and every area contained within it. This can lead to incredibly challenging, but rewarding, runs and are targeted at more experienced players, including streamers looking to impress their audience.

In terms of the new item options available in Synthesis, there are two main types: Fractured and Synthesised Items. Fractured Items can only be found within memories and will be picked up fairly frequently. However, because they are found within a memory they come in a decayed form, which means that some of their properties are stuck and cannot be changed by the player through Path of Exile‘s existing crafting systems. Though some lucky players may find Fractured Items where the stuck properties are desirable, the majority of ones that will go unused are designed to be used as ingredients for Synthesised Items. 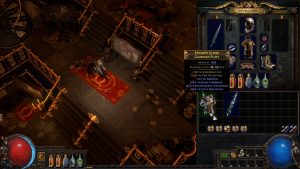 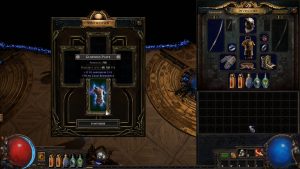 Synthesised Items gives players their first control over the implicit mods that are considered key parts of an item. These are created using a machine in the Memory Nexus. Synthesised Items use three Fractured Items as ingredients to create a new white (normal) item, with the implicit mods of the new items based on the explicit (other) mods of the Fractured Items. Grinding Gear Games is not releasing details of how exactly the new implicit mods are determined and hopes for players to be able to piece it together as the Challenge League runs, with those who put the effort in working it out able to use the system for their own benefit.

The release of Synthesis is also bringing multiple changes to the core Path of Exile game. Firstly, the Betrayal content will be added to the base game. This includes the addition of Jun Otori as a Forsaken Master — appearing in the Maraketh Desert in Act Nine onwards — as well as some rebalanced and integration so that the content appears less often.

There will also be a full rebalance on spells in Path of Exile. All spells are being rebalanced so that they are roughly the same power level, and also so that actually casting spells is seen as a more viable option. The developers have noticed that players have been actively using methods to avoid spellcasting themselves, using totems, traps, mines, or particular reaction builds. The spell rebalance to is geared toward making spellcasting more appealing and includes six new primary damage spells, which are split between the new Chaos Spellcaster and Holy Spellcaster character archetype builds. 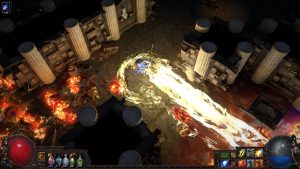 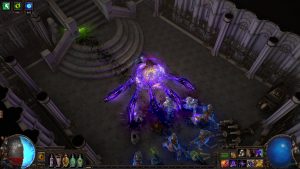 Finally, Synthesis will introduce sixteen new unique items to the over-850 already in the game. With there being so many unique items, Grinding Gear Games is making sure that all new items always add new and interesting effects. The example shown in this batch is the Eternity Shroud, which has a new property that triggers the Glimpse of Eternity skill when the player is hit. This is a brand new skill that is unique to the Eternity Shroud and creates a time-dilation bubble around the player that slows down enemy action speed.

Synthesis is set to be released first on PC on March 8, 2019. It will then be released for Xbox One on March 11, 2019, and will be released with the upcoming PlayStation 4 version in mid-March 2019. Like all other Path of Exile content, the expansion will be available to all players for free.