Limited Run Games has announced that it will release a physical version of Asymmetric Publications’ West of Loathing. The physical edition will be released for Nintendo Switch and will be available to order from Limited Run Games’ official website at 10am Eastern on August 17, 2018.

West of Loathing was originally released for PC and Mac in 2017 before being released digitally on Nintendo Switch earlier this year. The game is a single-player, comedic, stick-figure, Wild West RPG and a spin-off to Asymmetric Publications’ long-running browser-based title Kingdom of Loathing. Those looking to read more can check out RPGamer’s review of the Nintendo Switch version. 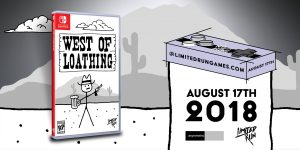