Wandering ’til the Cows Come Home

Browser multiplayer RPG Kingdom of Loathing has been around since 2003, but Asymmetric Publications recently branched out with the release of West of Loathing on Steam in 2017. A Wild West spin-off that retains its predecessor’s stick-figure style and heavy dose of humour, the game now makes its console debut on the Nintendo Switch. West of Loathing is a very worthwhile pick-up, providing a highly entertaining romp giving players plenty of reason to just sit back and enjoy some capering.

Players start off by naming and selecting the gender of their character — stick-figures don’t lend themselves to much customisation after all — and choosing one of three character classes: Cow-Puncher (melee), Beanslinger (mage), and Snake Oiler (rogue). After a quick tutorial-style area where players unlock potential “Pardners” and horses with some quick quests, though only one of each is brought into the adventure proper, they soon travel to the frontier town of Dirtwater before heading further west, undertaking various quests or just generally exploring the locations as they go. Pardners act as a second party member, providing entertaining comments on the places visited and an additional way of providing new locations to explore, but not really impacting the overall adventure.

Those familiar with Kingdom of Loathing will already be well aware, but it’s apparent from the outset that this isn’t a game to be taken seriously. The overall plot is basic; players are heading west just because it’s a thing to do. However, the game’s writing is fantastic throughout, injecting humour into every situation and doing it with aplomb. There’s lots of fun commentary or aspects to nearly every quest. West of Loathing does a great job of encouraging exploration; new locations and things to do pop up in abundance and the small nature of all the locations means that players never get bogged down in one area. Those that are longer than others, such as a ghostly bureaucracy, are very rare and the game simply uses the opportunity to insert further humour into things, and the writing is able to pull it off without adding annoyance. Asymmetric Publications’ ability to keep things funny without it feeling forced is a huge part of what makes the game enjoyable throughout. 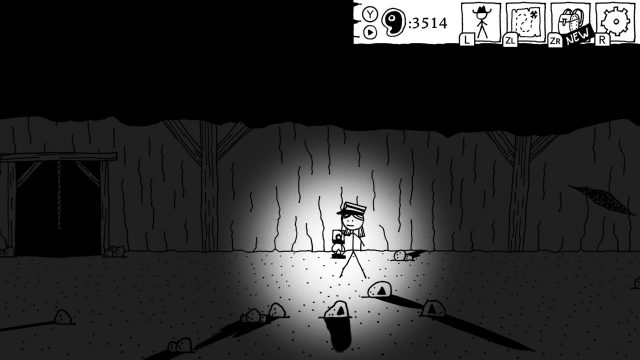 West of Loathing keeps players appreciably busy throughout its run. A standard playthrough that includes a decent chunk of the side content will likely take around eight to ten hours, but this still leaves out a lot of optional content. Even when the main task of heading all the way west is done, there are lots of things to do. There are many ending variations based on what players have — or indeed haven’t — done, and once it is reached the game happily continues and lets the final scene be activated at will, so working to achieve a better ending will be plenty motivation for many to find extra things to do. In fact, the two most world-affecting quest lines are completely optional.

Though the game is generally great at giving players the freedom to do what they want, there is some difficulty in producing a character that will be able to do all of the desired side content, which is often gated behind attribute requirements in various forms. There aren’t traditional levels, instead players spend earned experience points on a multitude of upgrade options to skills or base attributes. Dealing with the UI for character upgrades, as well as items and equipment, can be an annoyance. West of Loathing freely-toggled option to automatically spend experience points, which provides a decently balanced character but will not be helpful if players are aiming for getting past specific roadblocks or upgrading particular skills. There are some cool trade-offs in character building that help give it a bit more depth, in addition to some crafting and equipment upgrade systems; certain books will provide new combat skills but in turn apply negative character perks, which is a neat touch. Pardners also have growth aspects but this is automatic and much more limited in how they grow; for example, Susie only gets more powerful when killing cows.

Combat uses a standard turn-based system, with players and their Pardner facing off against up to nine, but usually between one and three, opponents. Players can generally either do a basic attack or use a skill or item. Item use and most healing skills are free actions, while attacking and buffing and debuffing skills will end the character’s turn. On the whole, combat is enjoyable but the balance often veers between a very easy victory or a certain loss. However, the balance issues are mitigated by battles being very quick and a loss simply dumping players back to the entrance of where they were, though a certain number of losses in a day will see players forced back to the town of Dirtwater for a rest. Pardners play an important role in battle, if mostly from a balance perspective, but really just act as a second, less versatile party member; a defeat occurs when the player character falls over regardless of if the Pardner is still standing, but not vice versa. The battle system is perfectly functional and complements the rest of the game well enough, but isn’t the main draw. 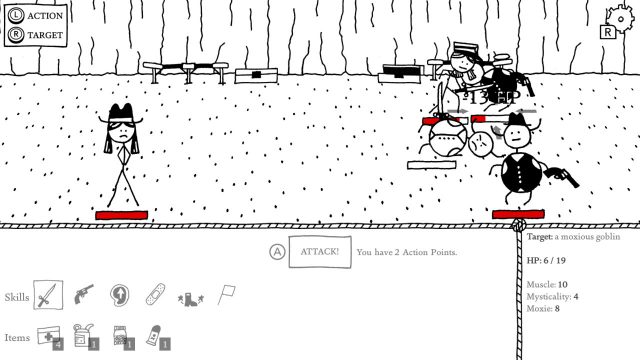 Not the only way to deal with goblins, but one of the more satisfying.

West of Loathing certainly isn’t in the business of challenging AAA games for graphical fidelity, but the animations are excellent and the game uses its minimalist art style to great effect through its design. The way shadows and light are handled in caves and mines also greatly enhances the feel of exploration. The world and narration have lots of character to them and the overall presentation is great, enhanced by some catchy music throughout. West of Loathing’s control system works well and there were no issues with the Switch port in the review playthrough. The game feels right at home on the console, particularly on handheld mode.

Asymmetric Publications has created a highly entertaining title in West of Loathing. The game provides an excellent mixture of humour and exploration that is very easy to get sucked into. Switch owners — and those on PC, Mac, or Linux who haven’t done so yet — would do well to check it out.