For RPGamers that missed out on Ys VIII in the middle of a packed 2017, the Switch version is a perfect time to jump into Falcom’s action RPG series.

The Ys series has a long history and, from the beginning, its developer Falcom has never been shy about getting the series on as many platforms as possible. Even not counting its many remakes, the original version of Ys I: Ancient Ys Vanished appeared on no less than ten platforms, spread between a host of Japanese-only PCs, the Nintendo Famicom, Sega Master System, MS-DOS, and even the Apple II. This serves as a long-winded way of saying that it should come as no surprise that the latest entry Ys VIII: Lacrimosa of Dana joins this well-worn trend. Originally released in Japan on the Vita in 2016, that version released alongside an expanded PlayStation 4 port in the West last year. NIS America commissioned what turned out to be an oft-delayed and troubled PC port earlier this year, and now the exploits of Adol Christin have reached the Nintendo Switch. Despite a few issues, the Switch version of Ys VIII is a solid way to experience the enhanced PS4 version portably while retaining the flexibility of TV play.

Ys VIII opens with Adol and his faithful friend Dogi traveling via ship to seek out adventure in new lands. Unsurprisingly, things don’t go well and the ship is attacked and sunk by a giant sea creature that crushes the ship with its tentacles. Adol wakes up — unaided by any fair maidens for once — on the deserted Isle of Seiren. This mysterious island is infamous among sailors as being a land that no one has ever returned from. Now Adol has his work cut out for him: he’ll have to search for other survivors, discover the mysteries behind the Isle of Seiren, build a boat to escape the island, and come up with a way to deal with the aquatic menace waiting to wreck any vessel.

There are a few things that can be quickly dispensed with about Ys VIII. First, the combat is fantastic; it’s simple yet refined, centering around a single basic attack button, jumping, and evading. There are also special attacks mapped to the face buttons, spending the gauge that accumulates when players use regular attacks. The combat system is incredibly responsive, with quick animations that allow players to rapidly react to enemy movements. That’s not to say there isn’t depth, as bosses have intricate attack patterns that change as their health decreases and paying attention to the patterns becomes especially important for higher difficulties. 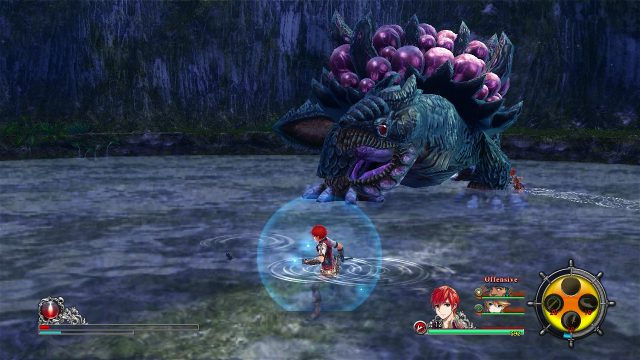 Boss battles are fast-paced and epic.

The music is also a hallmark of the series and is once again excellent in Ys VIII. Falcom Sound Team jdk is at the top of their game with a soundtrack that punctuates serious moments with softer tones while still having the electric guitar-infused boss themes that are a hallmark of the series. The frantic pace of the boss battles is expertly matched by lively guitar riffs that get the blood pumping as the player dodges attacks and slashes at beasts many times the size of Adol.

Ys VIII also continues the trend in the Ys series with an increased focus on story, for better or worse depending on what the player values in a Ys game. This hasn’t been a universally welcome change as some players preferred earlier Ys entries where the story was sparse and the focus was on the combat. While VIII‘s story won’t change anyone’s mind who is opposed to this trend, this is the strongest that a Ys story has ever been. Alternating between Adol and the titular Dana, slowly peeling back the history and secrets of the Isle of Seiren makes for an engrossing tale, even if there are occasional odd story beats such as a serial killer popping up and the ghost pirate ship interlude. The characters are also a strength with Laxia and Sahad providing an interesting and entertaining contrast to one another.

The island is vast and interesting to explore, with a multitude of different environs and enemies to encounter. Exploration is occasionally blocked by obstacles such as boulders and landslides that lock off areas of the island. However, as Adol finds and rescues survivors of the shipwreck, the combined survivors can clear those impediments. It’s an interesting mechanic that keeps players motivated to explore and find all the survivors. However, one of the few complaints involves the map, which struggles to display important landmarks in three dimensions. It leads to times that it appears an important point should be in front of Adol but instead is, for example, on a cliffside below. It’s not a catastrophic issue, but even playing the game a second time, I’ve gotten lost as while attempting to reach an important area. It’s great how verticality has been injected into the areas of Ys VIII, but unfortunately, the map is often not up to the task of pointing the correct way to the destination. 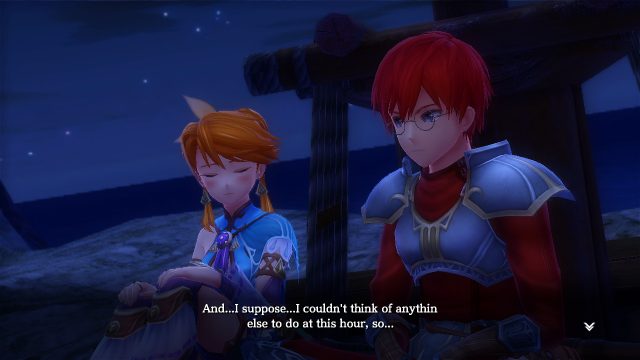 Localization errors aren’t common, but they ruin a few moments.

So if the game is pretty great — assuming that the added talkiness isn’t a turn-off — all that leaves how this particular version performs on the Switch. I’ve played the first two chapters (about ten hours) and it’s been a mostly positive experience. The raw performance falls in-between the Vita and PS4 versions and I haven’t noticed any areas where the frame rate dropped, though it’s apparent that it doesn’t match the PS4 version. In the review release provided, there have been some odd graphical hitches where characters judder back and forth and there are occasional odd shadowing effects. These happen mostly in story scenes rather than combat and I’ve noticed them more often in docked mode than handheld. I’ve also noticed two localization errors in my time with the review build. These issues may be fixed by the coming patches and they didn’t affect gameplay or my enjoyment of the game, but given the release’s history, it seems worth noting.

It’s a shame that stories surrounding the localization and ports have seemingly dominated the narrative surrounding Ys VIII. It is a fantastic action RPG with incredible, fast-paced combat, an outstanding soundtrack, and interesting exploration. The Switch port, while including no new content, does make everything originally available in the PS4 version portable. The few bugs I encountered during play weren’t significant enough to warrant changing my very positive opinion of the game. For RPGamers that missed out on Ys VIII in the middle of a packed 2017, the Switch version is a perfect time to jump into Falcom’s action RPG series.