NIS America has announced that Kadokawa Games’ Metal Max Xeno will be released in North America on September 25, 2018, with its European release following a few days later on September 28, 2018. The game will be available exclusively on PlayStation 4 both physically and digitally. A limited edition is currently available to pre-order for $59.99 from NIS America’s online store and contains: 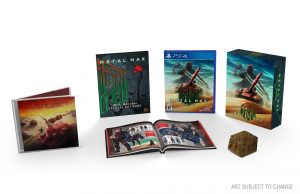 Although set in the same post-apocalyptic world as the previous games in the series, Metal Max Xeno marks a bit of a refresh, taking place in a different time and location with some adjustments made to its history. The game was released in Japan in April 2018, for PlayStation 4 and PlayStation Vita. The PlayStation Vita version is not set to be released outside of Japan.