In This Party, We Always Choose “Fight”

With Kiryu’s saga finally in the books, Ryū Ga Gotoku Studio has taken the opportunity to branch the Yakuza series out. Yakuza: Like a Dragon (known simply as Yakuza 7 in Japan) sees the developer experimenting with some huge changes, most notably a brand new protagonist and the introduction of a turn-based combat system. The result is a highly successful and most thoroughly engaging experience, packed full of charm thanks to an excellent cast, and a great point for series’ newcomers to jump on board, though not without issues.

Yakuza: Like a Dragon begins at the turn of the millennium in the familiar Tokyo district of Kamurocho. Ichiban Kasuga is a low-ranking member of the Arakawa Family, which is a subsidiary of the Tojo Clan, one of Japan’s biggest underworld organisations. Delighted to be able to prove his loyalty to family patriarch Masumi Arakawa, he takes the fall for the murder committed by a higher-ranking member and is sent to prison for eighteen years. Upon finally getting out, he doesn’t receive the welcoming back he anticipated and is shocked to discover that Arakawa has betrayed the Tojo Clan to join the rival Omi Alliance. Confronting Arakawa about this betrayal and his abandonment, Ichiban is shot and left for dead.

Thanks to medical intervention from one of its residents, Ichiban wakes up in a homeless camp in Yokohama’s Ijincho district, an area that is conveniently out of the reach of the Omi Alliance thanks to a tenuous power balance between the three gangs known as the Ijin Three. As he attempts to set himself up in his new surroundings, not least finding a place to live, he becomes embroiled in a conspiracy connecting all of the members of Ijin Three and comes into conflict with a supposedly purist political group known as Bleach Japan, but not before managing to form a party of other down-on-their-luck allies. 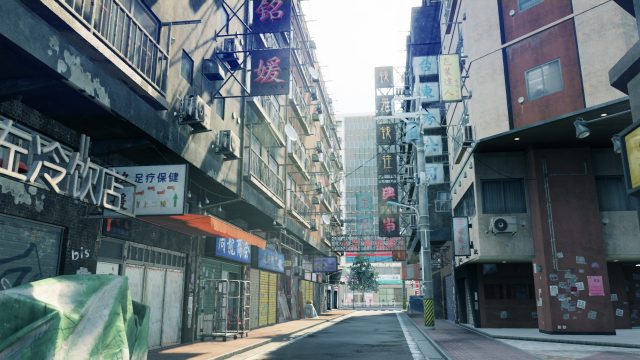 The new setting of Yokohama’s Ijincho district is packed with character (and characters).

The story, cast, and setting are really what make Yakuza: Like a Dragon shine. The largely middle-aged cast is a pleasing contrast to the usual youth-dominated set of heroes from RPGs and is filled with memorable characters. Ichiban himself is an incredibly charismatic and infectiously passionate main protagonist despite the out-of-place combination of being a yakuza who sees himself as a potential hero, while his allies and their differing situations strike numerous and varied chords. The game is packed full of emotion and touches equal parts sensitively and passionately larger aspects such as homelessness, chosen family, and marginalised groups being displaced by society through lack of opportunity and safety. It should be noted that some story events — particularly towards the end — rely on knowledge of the series to be fully appreciated, but there’s enough context within Like a Dragon to ensure that newcomers won’t be hampered by the lack of it.

The Sega (and Atlus) localisation team shows once again why it is currently among the most highly regarded in the industry and follows the template it set out in Judgment by providing Japanese and English voice overs, with two set of English subtitles to tie in with each of them. It’s obvious how much effort has been put in, and the localisation is superb throughout. Yakuza: Like a Dragon is audibly fantastic regardless of one’s preference on language. The Japanese voice work is stellar, and the English acting is close behind, while the music and sound effects are both excellent.

The turn-based combat system in Yakuza: Like a Dragon amusingly has its origins from a very well-received April Fools’ joke, but it ends up being a very nice fit for the game. Giving it the pretense of being how Ichiban’s overactive, Dragon Quest loving imagination running wild, Ryū Ga Gotoku Studio gleefully mixes up the staples of turn-based fantasy JRPGs with a modern setting and the Yakuza series’ heavy violence. 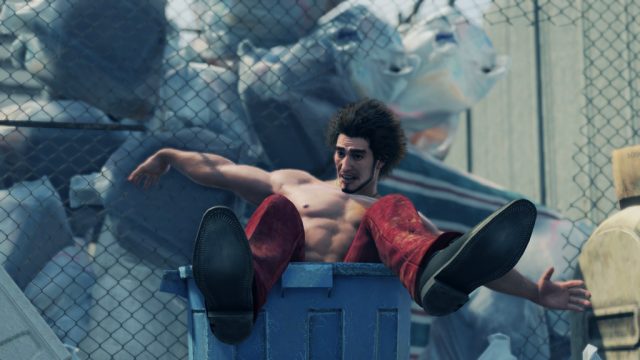 It’s impossible not to root for Ichiban as he climbs back up from the bottom.

The actual mechanics of the combat are fairly straightforward, but the presentation goes all out in making the combat both engaging and satisfying. The basics are straight out of the Dragon Quest series, which is frequently referenced in the game, with the only major divergence coming from timed button presses. Ichiban is accompanied by up to three allies during battles, most often against one of the district’s marauding group of thugs. On their turn, each character can do one action, such as attacking or using a skill, while the party and enemies eye each other up waiting to make their move. The traditional JRPG elements are featured, including appropriate status effects as well as weakness and equipment systems, but so do some usual Yakuza traits, such as party members potentially picking up items lying around to use as makeshift weapons when attacking.

Yakuza: Like a Dragon also features its own job system, though ultimately it ends up being fairly shallow as the selection isn’t huge, and players can simply leave all of the party members in their default option and get by perfectly fine; in fact, changing Ichiban’s job too early can ultimately prove detrimental. Each character has both a personal level and a job level, with attributes and skills learned as they increase, and new jobs become available based on Ichiban’s attributes or bonds with other characters. The game also features a bland selection of dungeons, although ultimately they don’t form a very large part of the game, which is probably just as well since they are largely not very interesting or fun to go through.

Outside of combat, Yakuza: Like a Dragon is very much like the other titles in the series. Players advance the story by going to the markers readily displayed on the map, but are free to spend the intervening time wandering around the district and interacting with its many distractions as they wish, completing side stories and challenges, or partaking in a wide variety of mini-games. Excepting a small number of introductions to some new additions — such as the company management storyline — these are all entirely optional, but the game does a fine job encouraging players to at the very least see what’s out there. It strikes a great balancing giving players the option to go out of their way to participate but not feeling like they are forced to. Checking out the side stories as they become available is recommended as they provide some of the most entertaining and humourous portions of the game, as well as some particularly touching moments. 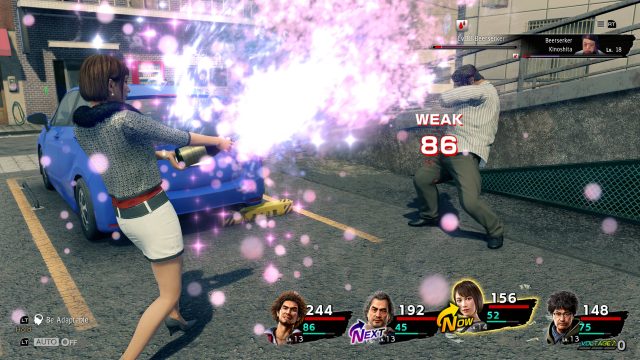 The presentation of the turn-based combat system is outstanding.

Yakuza: Like a Dragon’s biggest problem is a trio of boss fights in the later stage that provide massive difficulty spikes compared with what comes before, and even after. The game at least provides a useful area to level up in just before the first spike and remains helpful for the following ones, but all the fights do is force players into some tedious hours of grinding that undercuts the otherwise great enjoyability of the game. These final stages ultimately highlight how the combat and job systems have been raised by the rest of the game rather than being notable examples in their own right.

There are occasional texture pop-ins and a few lengthier-than-ideal load times, but ultimately the level of detail and pleasing UI make these drawbacks worthwhile. Character designs and faces, very often based on the Japanese actors portraying them, ensure they are instantly recognisable and memorable. The biggest criticism on the visual side is that the dungeons and similar areas are often not at all interesting to explore and are simply made up of boring corridors scattered with enemies.

Though it has its issues, Yakuza: Like a Dragon still ends up as a great overall experience. This story of not just Ichiban, but also his allies both former and new, is a tour de force that sucks players in completely. It’s a roller-coaster taking players through the full gamut of emotions and an easy, if slightly caveated, recommendation even to newcomers. Though Kiryu’s saga may have come to an end, Ryū Ga Gotoku Studio has shown the series still has lots of potential directions to go.