Still on the Shoulders of Titans

Xenoblade Chronicles 2 is a game that has helped the Switch almost immediately become the console of choice for many JRPG fans, offering a stellar experience at the end of last year. After providing many months of support through additional quests and other bonuses, Monolith Soft has followed it up with a prequel expansion, which allows both fans and newcomers to experience a new tale showing the events 500 years before the events of the main game. Torna ~ The Golden Country is both a fantastic time for those who enjoyed Xenoblade Chronicles 2 and a great jumping-on point for new players wanting to test the waters a bit before diving into the full eighty-hour title. Those using Torna as their first port of call should note, however, that some elements of the story will likely dampen certain reveals in the main game.

As a prequel, Torna takes place on Xenoblade Chronicles 2’s world of Alrest, where nation-sized beings called Titans, on which humanity has made its homes, roam the Cloud Sea. Amongst the populace are Blades, artificial life-forms that bond with a person known as a Driver, providing the Driver with fighting strength. The prequel takes place primarily on the Titan of Torna, one which is new to players of the main game. There is very little time spent introducing the world, however, as Torna gets into the thick of things quickly, with the mercenary Lora and her partners Jin and Haze meeting up with Torna’s Prince Addam and his Blade Mythra — a special Blade known as the Aegis — as the latter two attempt to hunt down Malos, another Aegis bent on the destruction of the world.

Torna ~ The Golden Country has a much more mature overall story and cast than Xenoblade Chronicles 2, keeping some lighthearted moments but not wasting time where it doesn’t need to. Lora is a superb protagonist, both mature and kind, and she is ably supported by all of the other party members, even the two kids who accompany the group. The game’s story is much more constrained, meaning that many things about the world are left to inference, but this works in Torna‘s favour as it keeps things moving along and stops the player from getting bogged down anywhere. Torna’s showcasing of the relationships between all of its characters is excellent throughout. It isn’t a fully contained plot, some aspects only pay off fully in Xenoblade Chronicles 2, but Torna is a great tale that only adds extra quality to the world and its story. 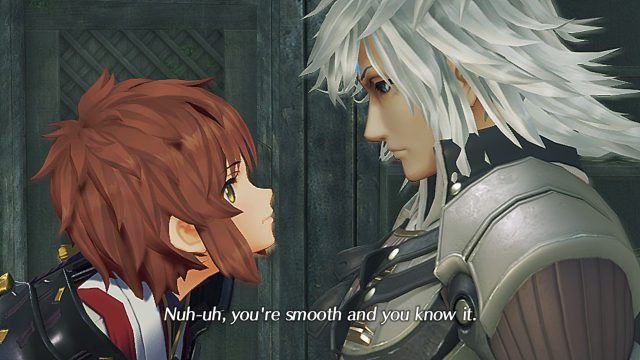 Lora and Jin’s relationship is one of Torna standout parts.

Some changes have been made to Xenoblade Chronicles 2’s real-time battle system. All the systems regarding auto-attacks and specials return, with players once again controlling a single Driver’s team while the other two are skillfully controlled by the AI. However, in Torna, Blades and Drivers can both take the role of the active participant in combat, with players heavily encouraged to switch between the three options — one Driver and their two Blades — as the situation warrants. Attributes and health are shared across the Driver and Blade team, but the switch mechanic comes with a new aspect to the health system, where taking damage will still leave a red portion of the HP bar filled; if the active participant is switched then the new member will come in with that red portion filled, potentially alleviating the urgent need to heal.

Another helpful addition comes from the three-step elemental specials, which no longer have to follow one of the sixteen prescribed combinations. Those combinations remain as the ideal options, but now players do not have to feel like a potential combo is wasted if the current elements of the party fails to provide one. Meanwhile, the set party members come with a helpful natural balance that makes it easy to pull off the powerful combos involving the game’s status chain. Torna does a great job tweaking the combat system to cover the way the party is built, and in ensuring that things are kept fresh. Players will be kept more on their toes in Torna, which fits in nicely with the overall pace of the expansion. Combat is once again a delight to partake in, and many will find Torna’s iteration of the series’ combat systems to be the most engaging so far.

With a set party, gone is the randomised nature of getting new Blades and using Core Crystals. However, the rest of the methods for enhancing party members is the same, with a mixture of experience and skill points, accessories, and affinity goals that provide boost once certain tasks are completed. Inns are replaced by campsites, which is where the new addition of crafting comes in. The crafting is a straightforward but welcome and interesting addition, used for many areas including sidequests, accessories, and passive boosts and tie in well with the returning material collection systems from the main game. Field skills that may be used to unlock treasure chests or gain extra items from collection points are still present, but these are a lot less restrictive on progress in Torna.

Unsurprisingly, Torna looks fantastic on the Switch and both runs and looks great in both handheld and TV modes, the only minor blip being a bit of slowdown in the final battle. Though there are less of them than in the main game, the environment designs are still full of great views. Monster designs are also nicely used, giving each region distinct flora and fauna, even if all of the genera will be familiar to Xenoblade Chronicles 2 players. The UI and control system again work together brilliantly meaning that every action only needs a single button press. 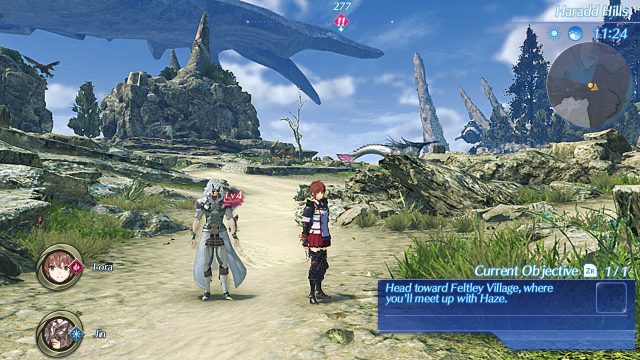 With its more constrained nature, Torna takes place exclusively on two Titans — the eponymous nation as well as the returning Titan of Gormott — will likely take most players around fifteen to twenty hours to complete, though completionists will see that time rise. Gormott offers the game the opportunity to give returning players a neat sense of familiarity coupled with the excitement of seeing lots of subtle changes.

The expansion is full of side content, but the way it’s handled may frustrate some players by forcing the completion of a significant portion of it to progress. At two particular points, the game will require that players have raised their Community level to two and four respectively, which is done by finding allies across Torna and Gormott. This is accomplished by talking to NPCs and doing side quests, with all the various NPCs that players have met across the world shown in a menu that offers a neat callback to Xenoblade Chronicles and Xenoblade Chronicles X. This won’t be a problem for those who are doing these quests as they become available, but for those hoping to critical-path things, backtracking will be an unfortunate necessity. Fortunately, the quests are all plenty interesting, each providing their own little stories for the characters involved, with some involved in multiple questlines as family members and such ask the party to resolve their issues, as well as adding further depth to the main characters.

Torna provides a selection of new tracks and new arrangements, featuring a fairly jazzy theme, which are once again a joy to listen to; the new variation of Gormott’s daytime theme in particular is a standout. The voice acting is strong, but not quite at the same level as the base game. All of the main cast members do great jobs, but there are some weaker performances from minor characters. It’s also a minor issue, but the lip-sync with the English voiceovers also has some areas where it’s a bit off, something that has been par for the course from the series.

Torna ~ The Golden Country manages to offer both a similar and distinct experience to Xenoblade Chronicles 2 at the same time. The prequel builds superbly on the main game’s lore, providing a fantastic experience for fans just looking to see more of the world. Meanwhile, those looking for a more mature story and cast will absolutely get on board with Lora, Jin, Addam, and the rest of the crew. It’s almost a shame that the time we get to spend with them is so short in comparison. Monolith Soft has created another excellent experience for Switch owners to get stuck into.