The Soulslike phenomenon has already transcended the boundaries of free-roaming 3D worlds and is now regularly used as a template for 2D action RPGs as well. Such is the case with Third Sphere Game Studios’ inaugural offering Watcher Chronicles. But subtracting a dimension while making sure the formula continues to pay dividends comes with its share of challenges. Though Watcher Chronicles is a decent foray into well-charted territory, though not particularly groundbreaking, and it’s impossible to not feel underwhelmed by its shortcomings, chief among them a bland sense of exploration, such a vital staple of this sub-genre.

There’s very little narrative to set up as the game begins, and it doesn’t make an effort to dole out additional story as it progresses, either. Players assume the role of a soul, either male or female, who has died and is now stuck in a kind of purgatory. After leaving the crypt they wake up in, they are informed that leaving this place requires defeating four so-called Watchers located in the far-flung corners of the world. That’s about the extent of the plot, and armed with this knowledge, players set out on their quest. 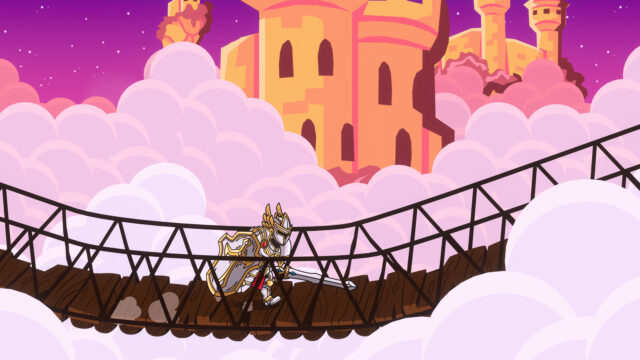 A city in the clouds is one of the game’s more exotic locations.

Even a cursory first look immediately reveals Watcher Chronicles‘ love-it-or-hate-it graphical presentation. The game sports a cutout animation aesthetic, meaning characters appear to be assembled out of individual limbs and pieces that pivot and rotate around to produce movement (which frequently fly around the screen as slain enemies explode into boney bits). That’s not to say it’s poorly done, but those who dislike the slick-and-glossy appearance will have a bad time here. Environments have a similar look, giving the game an odd, inscrutable manufactured look, though they are at the very least colorful.

Beyond that, the game struggles to deliver much variety. This is noticeable early on in the limited selection of enemies. Players need to be prepared to cut down a veritable army of skeletons of different types, certainly for much of the game’s early stages. Eventually, other enemies and reskins do get shuffled into the mix, but the skeleton grunts are a mainstay for the game’s duration. 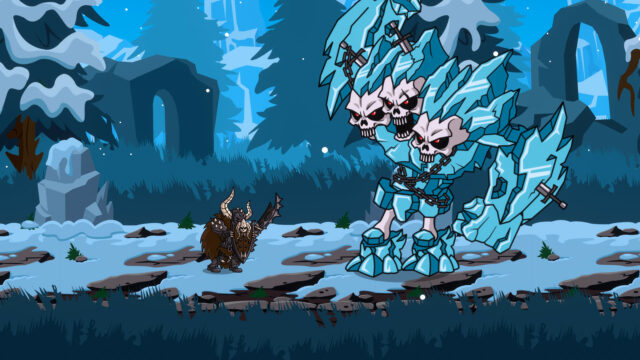 One of the game’s less common enemy varieties.

Though its aesthetics won’t be everyone’s cup of tea, Watcher Chronicles fares somewhat better when it comes to its bread and butter: combat. Essentially, the game ticks every box in a list of combat tropes from the Soulslike sub-genre, from a first boss that feels nigh-unbeatable to new players to the need to reclaim your lost currency — here dubbed Umbra — after death before it’s gone forever. Stamina management is extremely important as attacking, blocking, and dodging all eat up large chunks of the bar. Bosses, particularly later ones, can be quite difficult to best, and all but require mastery of the game’s stamina recovery system. Blocks and dodges use up stamina, but pulling them off at the critical moment of attack actually recovers lost stamina, enabling the player to go back on the offensive far more quickly than they otherwise would be able to.

Bosses present unique challenges, and are overall a joy to go up against. While normal cannon fodder enemies offer little difficulty for seasoned players, bosses have unique attacks, combos, and telegraphs to come to grips with. It’s not unusual for a boss to require a good number of attempts; many hit like trucks and have limited windows of opportunity for counter-damage, but they by and large feel balanced, with only a few pushing the envelope in terms of fairness.

There’s a decent amount of ways players can customize their character via equipment. While there are no dedicated classes to choose from — players can only pick their character’s gender when starting out — there are many weapon types to purchase or find, ranging from one- and two-handed swords to spears, axes, katanas, and many more. Additionally, all weapons and armor are displayed on the character model, which is a nice touch of detail. Different weapons offer unique combos, timings, and hit zones, and can be upgraded, with secondary ranged weapons also available. Players earn Ascension points when they level up, and these can be spent on four different character parameters, enabling character builds more focused on defense, melee combat, or even magic. 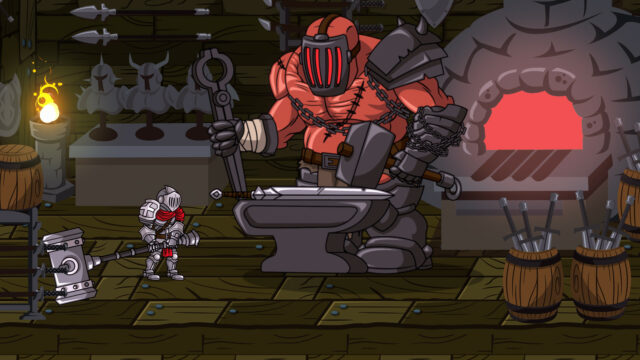 The hero will return to the blacksmith frequently during their adventure.

While enemy variety may be lacking, exploring the world of Watcher Chronicles is, for lack of a better phrase, as two-dimensional as can be. Twisted mazes that take interesting routes through tangled areas are nowhere to be found. Instead, players simply run right or left, depending on the area, until they encounter a ramp or staircase that gives a choice of continuing on the current plane or going up or down a level and running left or right some more. It’s as simple as navigation in a 2D game can be, with no real points of interest found along the way. This is only slightly broken up by the occasional locked door or elevator that opens a shortcut to an earlier section. Areas are rather large, so it is nice to have an in-game map showing unexplored areas and unopened chests and doors to refer to, even if it is visually bare-bones. Though the art style may appeal to some tastes, it’s hard to classify exploration as anything other than dull and uninspiring.

Watcher Chronicles’ music ranges from inoffensive to good. Areas have unique themes, which are pleasant enough that they don’t get in the way or distract from gameplay, even if they’re not exactly going to get stuck in anybody’s ear. Boss encounters fare a bit better, with rocking guitar riffs and pulse-pounding percussion shredding the silence. It’s a good compliment to the additional intensity already inherent in nailing the timing of boss battles. In the absence of a plot, it’s not surprising that voice acting is also entirely absent.

I’ve long been a fan of games that adopt Soulslike elements into their design, even the 2D variety. If done well, even these games’ inherent limitations can be overcome in sterling ways. Watcher Chronicles, however, doesn’t ever quite put its best foot forward. Combat works well enough, but the clean and colorful art style definitely won’t be to everyone’s liking. Seeing as there’s virtually no story to speak of and exploration never so much as approaches being interesting, it’s safe to say that we’ve seen other games nail the basics at least as well while wrapping them up in a more pleasing package. Watcher Chronicles may scratch an itch for those in need, but ultimately fails to leave a lasting impression. 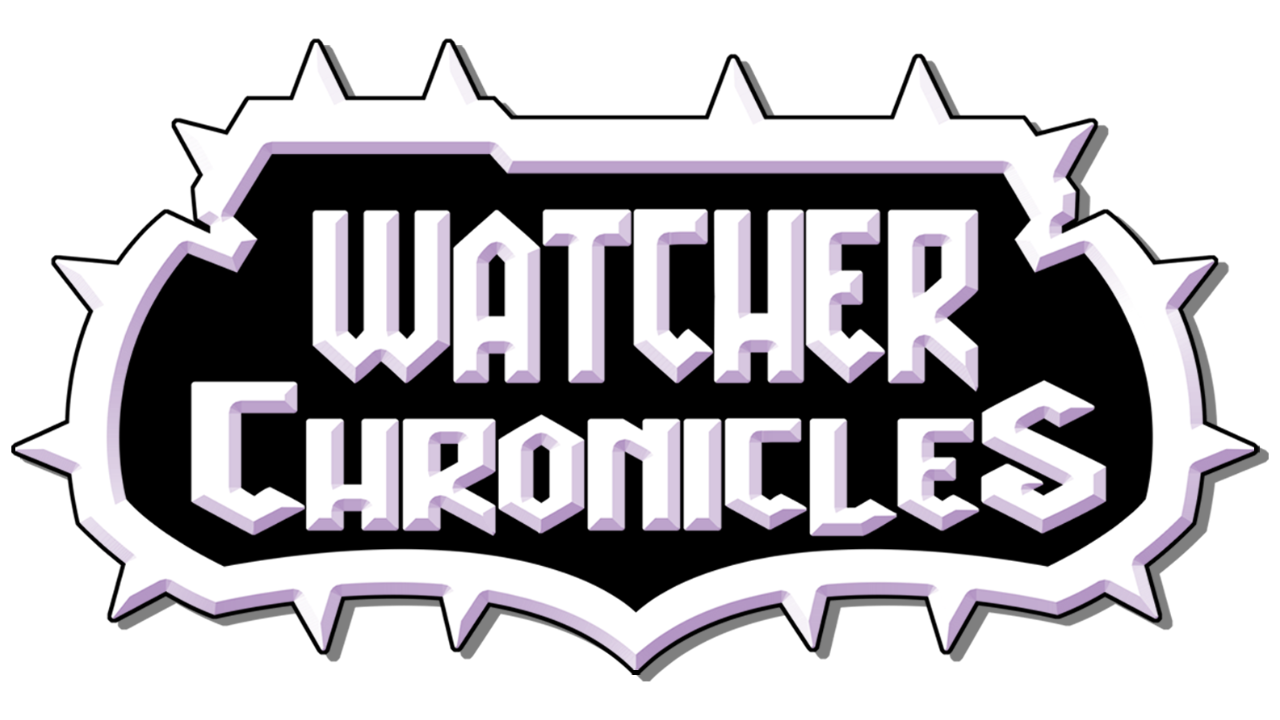