Challenging Koei Tecmo’s Omega Force at a sub-genre it has spent over twenty years trying to perfect is a daunting prospect, but one that Aquaplus and Tamsoft have taken up with Utawarerumono Zan, a hack-and-slash Musou-style spin-off to Aquaplus’ visual novel and tactical RPG hybrid series. The title, unfortunately, comes up short, with combat without much weight behind it and a lack of interesting content that fails to provide much incentive to keep playing. While I am very much on board for more Utawarerumono-related content, Utawarerumono Zan is simply lacking in enough substance for both fans and new players to get excited over.

One of the bigger disappointments for the game should be addressed from the outset: Utawarerumono Zan’s story mode only covers the events of Utawarerumono: Mask of Deception, meaning players will not get to see any of the events from Utawarerumono: Mask of Truth and miss out on the entire second, and much better, half of the duology, after Mask of Deception finally gets to making things interesting in its climax. This decision is particularly noteworthy given the low number of battles in it, with the events shown through sixteen chapters, with a number of these simply consisting of a story event without any combat. The events that are included are done well, but Zan feels like it goes too far in condensing the plot. While Mask of Deception certainly has many scenes that can be safely skipped entirely, Zan loses many important background details and character motivations that connect the story together, and in the end it feels like a series of disparate chapters. 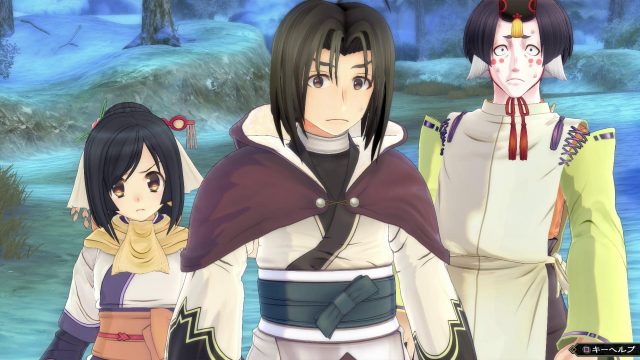 The game renders character models, and then puts most events into visual novel format anyway.

This would be fine if the gameplay was on par with better hack-and-slash titles, but it just feels rather weak. It’s easy enough to unleash combos and special attacks on waves of enemies, but there’s just very little satisfaction to it. The combat lacks any feeling of weight and it feels like charging through paper. Certain battles offer a bit more interest, but these showcase other weaknesses in the combat, like the limited options for reacting to enemy attacks. Though there are twelve characters to select for the party of four in each battle, the game doesn’t offer enough incentive to swap between them, and some feel a lot less viable in the hack-and-slash arena than others. Battles are quick but rarely consist of anything more than running around, defeating opponents.

The story mode can be easily completed in a few sittings, though the final few battles may provide a bit of challenge, if only due to a couple of boss enemies that can hit very hard. Aside from this, players can challenge a variety of free missions as well as replay story missions — with a hard difficulty unlocked after completing the story — to try and accomplish bonus objectives and pick up more resources that can be spent upgrading characters and equipment, with an online co-op mode also available for up to four players. One wonders if the game would have been more interesting and involving had at least some of these battles been integrated into the story mode. Those that are able to gain high levels of enjoyment out of the combat should be satisfied for a good number of hours, but there is very little incentive for anyone else to keep playing. 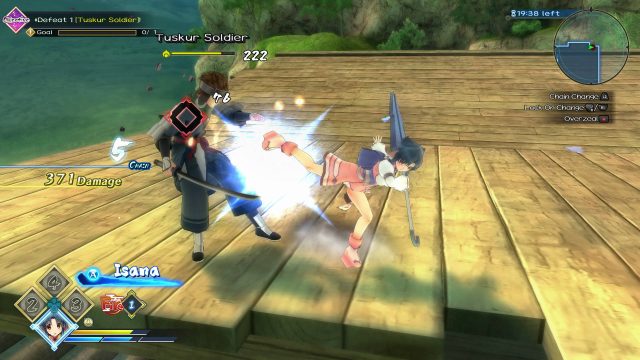 Combat is functional, but lacks any sense of useful feedback.

Though one of the game’s selling points is seeing Mask of Deception’s events and characters rendered in higher defintion, this doesn’t amount to much in practice. Most of the events put the character models into the very same visual novel structure. The 3D engine isn’t an overly impressive one and, in fact, some of these scenes feel like they lose the atmosphere that was present in the original style rather than gaining anything from the upgraded rendering. The Final Strike special attacks are at least well animated and Utawarerumono Zan makes good use of the art style and UI elements of Mask of Deception, while the character designs retain much of their distinctiveness.

Utawarerumono Zan’s strongest point is easily its audio. The Japanese voice acting and music, like its parent title, are great. The reworked tracks are geared up nicely to fit with an action combat system and will elicit some fond memories for fans of the tactical RPGs. More music can be unlocked as players complete optional tasks in the game, and is perhaps the best reason for players to stick with the game past the completion of the story.

Utawarerumono is a property that deserves greater awareness, but unfortunately Utawarerumono Zan is unlikely to help. It might serve some as a brief reminder of events, but taken in a vacuum neither the storytelling nor gameplay do enough to warrant much attention. At least there is the remake of its first title to look forward to in 2020.