Dungeon Crawling At Its Safest

The first-person turn-based dungeon crawler is one of the oldest RPG sub-genres out there.  Experience Inc. has considerable familiarity with these games and turned its creation of them into a type of art form.  Its latest title in the space is Undernauts: Labyrinth of Yomi, a game that at its core plays it safe and accessible.  It is ultimately a refreshing time that embellishes the best parts of a dungeon crawler, while simultaneously highlighting the genre’s pitfalls.

A labyrinth has appeared in 1979 Tokyo, a massive complex transported from another world that can only be entered by powered gates.  This labyrinth — known as Yomi — causes humans to gain otherworldly strength including magic and special abilities.  People also risk entering the labyrinth to mine argen, a resource that humanity has been using to make new technological developments.  The protagonist is the chief miner for a fledgling company trying to strike it rich in an uncharted part of Yomi.  The company began as a small team hiring those who the rest of society do not put stock in, women and university students primarily, recruited through candy store ads to avoid legal oversight.  Sadly the opportunity for intriguing commentary is squandered as everyone but the protagonist on the initial survey team is killed at the end of the prologue by Luci, a mysterious girl in red with a leech for an arm.  Connections to the real world stop there, as the surviving members get stranded in Yomi after the gate is powered down by a sinister voice on the radio.  A mysterious girl in a wheelchair soon reveals that pieces of the guardians known as sinners’ pasts are the key to re-powering the gate and heading home.

Playable characters are secondary generic characters with no speaking lines, or reference to their backstory, while only being mentioned occasionally in context.  The protagonist gets a few lines here or there that affect responses but do not change the story in the slightest.  There are only two members of this mining team that amount to little more than shopkeepers.  Supervisor Hanba is the voice of reason and is also in charge of promotion, party formation, and creating new characters.  Kaori is the money hungry president that knows a bit more of what’s going on and runs the restoration tent, which is the only source of revival in the game, costing argen each time it is used.  There are also a few characters met in Yomi: a cyborg that sits by the storage area and the aforementioned wheelchair-bound girl who helps upgrade and create items.  The fact that every important character acts as a shopkeeper helps the feeling that the story of the game is a threadbare afterthought. 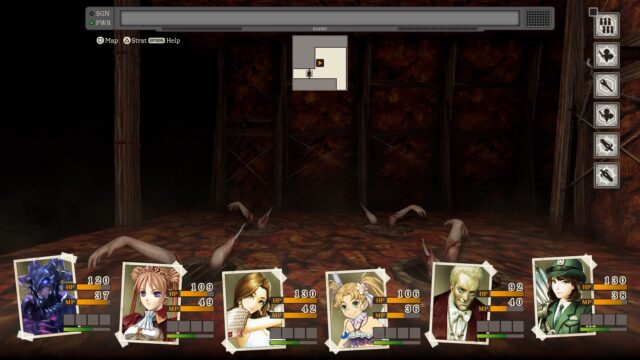 Flowers are the main source of progression in each of the dungeons of Yomi, as they are used to overcome obstacles ranging from simple locked doors to gaps needing ladders or bridges. Flowers are created using points obtained by sacrificing old equipment, while blueprints to create new flowers are obtained by defeating sinners within Yomi.  Some flowers cannot be created until the proper boss is defeated, requiring players go through the semi-connected dungeons of Yomi in a particular order that is not otherwise detailed.

Options for playable characters, from the protagonist to the generic created characters, include eight different classes to choose from.  Each class has its uses and can be swapped any time by resetting skill and stat points for easy experimentation if the player chooses.  The biggest issue with experimenting is that some classes are crucial to maintaining a balance, it leaves some damage dealers scrambling for a spot that may be based on what equipment drops are found.  Player formation is split in half with the first three spots for front row and the final three for the back row.  Bulwarks act as a strong defenders, while fighters, tacticians, and fencers fit in the front as attackers.  Ninjas can be adapted to either row, while hunters are strong back-line attackers.  Clerics provide the healing while sorcerers bring elemental damage.  Each of these base classes has the possibility to be promoted with an item to either a specialized version or a hybrid class that takes attributes from another of the classes while adding in a unique skill or two. 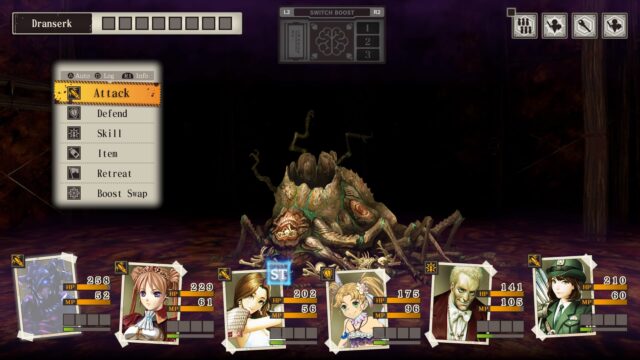 Some enemy designs are definitely unique.

The whole game is in first person, allowing for seamless transitions between the camp and dungeon, with the party represented by portraits that line the bottom portion of the screen.  When entering combat, enemy portraits appear on screen while the background shifts based on the current area of the dungeon.  Random encounters are joined by battles represented by colored skulls that include one-time combat (green), repeatable treasure fights (red), or bosses (purple).  An auto-travel option makes it easy to venture through previously-explored areas, picking the optimal route to the location chosen on the map.  It will pause for encounters, but resume afterwards, making it ideal when travelling back from and to camp.

Encounters are where Undernauts: Labyrinth of Yomi shines, as it has fast and engaging combat.  Options to repeat the previous actions or a normal auto-attack makes turns fly by.  The engaging part comes from deciding what skills to use and the opportune times to activate the switch-boost system.  This system features three options.  Overcharge allows for a one-level increase of any learned skill to be used at zero cost.  Duracharge makes it impossible to take status ailments while providing a fifty percent damage reduction.  Finally, neurocharge gives a speed, accuracy, and evasion boost while making rarer items drop if an enemy with a treasure chest is defeated while active. Switch-boosts last one round and need a recharge round for each to fill back up, so despite their power, they cannot be spammed constantly. 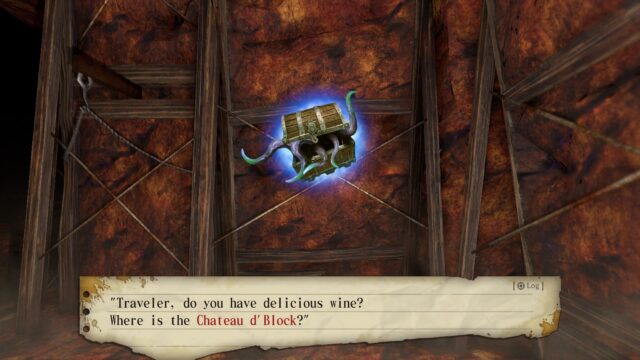 Equipment is very important in the game, as having low-tier gear results in a quicker death sentence than being underleveled.  Every area has new equipment to make the transition easier, however, loot is based on luck, meaning players will likely die a few times while obtaining enough gear to make a difference.  Each drop has a variation in rarity from bronze to gold, which provides supplementary stat boosts, as well as a numerical value indicating how many upgrade levels that weapon has.  Players can use extra and obsolete gear to get additional argen to upgrade gear themselves, which makes a small but notable difference.  Every few dungeons, an alcoholic mimic appears that can be given Chateau d’Block wine and in return allows players to explore a dream realm filled with treasure.  These areas need a lot of door, ladder, and bridge flowers to complete, so it is recommended to have as many as possible on hand when entering one to maximize the item gain.

Undernauts: Labyrinth of Yomi has a very somber aesthetic, with every environment dripping seclusion or dread.  This combines very well with a stunning batch of enemy portrait designs that provide a lot of fun variety.  There are interesting character portraits, but these feel superficial because the player gets to pick six faces and watch them for the rest of the game, with even an option to turn them to just numbers.  Some of the available portraits are throwbacks to other Experience Inc. titles, and though they might be a bonus for fans, they also feel out of place compared to the rest of the game’s visuals.  For the soundtrack each area has dreary tones to match the visuals, and combat music is up to the task of keeping the action flowing.  However, in wooded areas the constant and solitary sound of crickets chirping quickly becomes grating.  Another odd choice is during negotiation with willing enemies, the game plays the most tension filled track regardless of whether the enemy becomes angry or happy, making it at odds with the possible outcome.

Experience Inc. has refined its dungeon crawling offerings, and Undernauts: Labyrinth of Yomi is testament to that.  The game does not explore new ground, despite having a premise that would be exciting to explore, but it does feature fun combat and smooth gameplay.  This means that despite the shortcomings, the game is one that will be appreciated by dungeon-crawling fans as an accessible title with plenty of cool enemy designs and a labyrinth worth delving into.