The Gang Is Back

Tokyo Twilight Ghost Hunters is a game I was higher than many on, appreciating its unique combat system and episodic visual novel-style story. However, its appeal was limited by a number of UI issues and poor communication regarding its features. With the Tokyo Twilight Ghost Hunters: Daybreak Special Gigs enhanced port bringing the game to PlayStation 4, I was hopeful that it would be able to address these problems and court wider appeal. Unfortunately, the same issues remain and the new additions don’t really provide enough to make it worthwhile for veterans to return.

The game casts the player as a new transfer student at Kurenai Academy in Tokyo. After an introduction to the class, where the player supplies some oddly detailed personal info that has no apparent bearing on anything, a tour of the building transpires, ending on its unused fourth floor. This floor has a history of strange things happening, and no sooner has the player entered than a ghost is witnessed and made the subject of an exorcism by Gate Keepers, a private firm that exorcises spirits while running an occult magazine. Sensing the character’s potential, the boss of Gate Keepers quickly recruits them.

The story is enjoyable, effectively using an episodic structure that divides each of the thirteen episodes into a visual novel investigation before the story battle. It comes with its share of memorable characters, many of whom can be recruited into Gate Keepers. Unfortunately, their presence isn’t really extended in terms of the story, though Daybreak Special Gigs adds up to five extra episodes between the original baker’s dozen that gives these characters a touch more time in the limelight, providing the player has successfully recruited them. Altough a lot of the events are pretty self-contained, things start to connect decently towards the end, which comes with an interesting payoff. 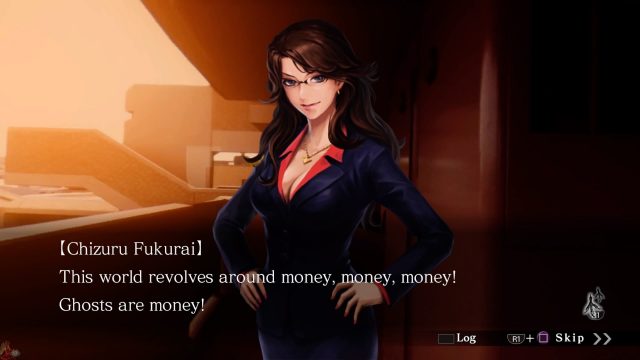 Chizuru knows what makes the world go ’round.

The main issue in the visual novel section is the game’s unique five senses option where players can react to prompts using a combination of five moods and another five senses. It can be very difficult to decipher what each combination can do and how characters will react to it. Picking a correct option at certain times can be necessary to progress through the chapter (though at least not much time is lost provided players save when given the option). In addition to recruitment, this is also one of the many things that can seemingly affect an ending confession scene, so good luck to any players shooting for a specific ending.

Confusing UI elements are not restricted to the visual novel sections. Combat suffers from some unusual controls, though it gets embedded in quickly enough, but the real issues come in the time spent preparing for the next story combat. Many features, such as the optional training sessions, are obtuse in their effects and others are easily missed. While their existence is very briefly mentioned early on in the game, it is not at all obvious how to access the optional battles that can be used to level up between missions until players are forced to find them in one of the middle episodes.

The balancing in the late game is a problem — albeit rectified through a few hours of grinding — but outside of that combat is fun and rewarding. The player and up to three allies are required to eliminate the target ghost, which may itself be accompanied by up to three others, inside a turn-limit. Each character has a number of action points, with each movement action using one point and attacks using up many more. Players can attack multiple times per turn if they have the points. Turns happen simultaneously, so things become very strategic as players learn to anticipate what ghosts are likely to do. Status effects can also play a huge part, and players will want to consider their equipment and try to gain as many resistances as possible.

Increasing the strategy is the ability to place various traps or items prior to combat. These can do things like block ghosts from going through, cause a status effect, or entice and attract ghosts. Daybreak Special Gigs helps slightly by now automatically placing some traps down. Most of the time these are effective, though often a completely different manual trap setup will prove more useful. These can be key because if players spend too long having to search for the target ghost they are very likely to not defeat it before the turn limit. Fortunately, if players do fail because of this or any other reason then the game happily offers an immediate retry with ghosts keeping the same starting position. Due to the lack of useful explanations and players starting with only two members, the first battle can be tough, but after learning the ropes, combat becomes a rewarding experience as players learn how to understand ghost movements and corner them. 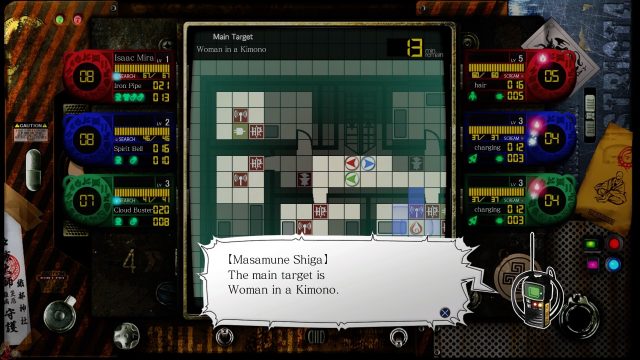 Not the sleekest tablet, but it works.

Visually, there’s next to no change. Animated character portraits are used in the visual novel sections, often accompanied by backgrounds that look very much like real-world photos. There’s nothing too special here, but the visuals work well within the game’s themes and the character movements look more natural than many other RPGs that have used similar ideas. Battles are quite neatly handled, with the tactical portion playing out on the UI of the characters’ own tactical Ouija Pad devices. However when attacks are made, the game instead transitions to a 3D first-person view of the area for the relevant party member. The level of detail isn’t overly impressive and the locales themselves are often generic, but the dark lighting and the downright creepy, highly varied designs of the ghosts give the battles a good atmosphere.

The same goes for the audio. Even though the Japanese-only voice acting gets credited for each episode, its role is highly limited to infrequent generic words and phrases, plus battle reactions. Aside from the episodic opening and ending credits, the soundtrack is the work of three-piece rock band The Key Project. The tracks are varied enough and fit well within the visual theme of the game. The game’s sound effects, however, can get repetitive as each ghost only appears to have a singular entry that will come up every time it appears in the 3D battle visuals.

While I certainly enjoyed being able to play through the game again, it’s difficult to figure out whom Tokyo Twilight Ghost Hunters: Daybreak Special Gigs might be for. The option to have it on PlayStation 4 is welcome and if players missed the original game for whatever reason, this is the version to pick up. However, there’s not enough new content for those who did enjoy the original to justify buying it again, and for those who did have issues, virtually all of the likely turn-offs remain. 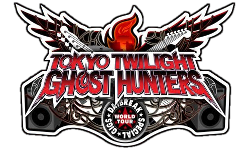