On a dark and stormy night, Link hangs on for dear life.  Awakening in a strange place, he calls out for Zelda.  Who’s this Zelda anyways?  Welcome to Koholint, where mysteries abound and our mildly waterlogged hero is ready to take on the world.  With interesting and unusual gameplay, adorable graphics, and excellent game balance, The Legend of Zelda: Link’s Awakening is a quality title for any Switch owner to consider. 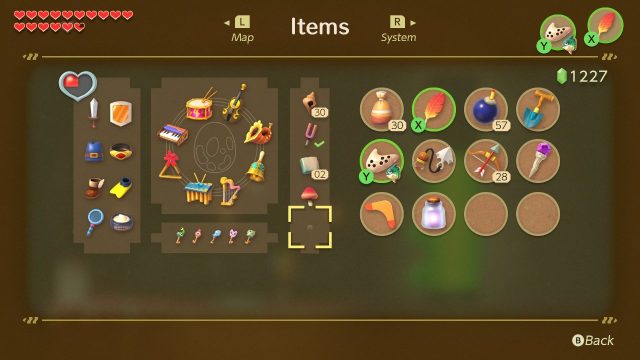 Because of the large variety of tools, exploration in Link’s Awakening is really fun and rewarding. Snagging a pair of flippers allows him to swim, while the Hookshot allows grappling up, down, and across a variety of obstacles.  It’s nice to see the Pegasus Boots feel like an integral part of the game, instead of just an afterthought.    The one item that doesn’t receive enough attention is the Magic Rod; received extremely late in the game, it’s only used a couple of times before it never finds its way out of the bag again.  As Link rambles through the various environments, from water to desert, mountain to beach, players will need to keep their eyes open for hidden rooms to bomb open, and multiple collectables including heart pieces, which improve Link’s health, and Secret Seashells which can be collected to bestow a variety of gifts on Link.  To make zipping around the island easier, warp points can be uncovered and used with a special ocarina song — if the player finds it.

The story of Link’s Awakening is simple, but does an excellent job of guiding the player from start to finish.  Collecting eight instruments to wake the Wind Fish of legend is going to have consequences, the island is determined to stop Link from learning its secrets.  The story is one of the reasons exploring feels so great — there’s something to learn and discover around every corner, including a mandatory trade chain that winds itself throughout the whole island.  It’s novel to see the NPCs change and grow as the game progresses, something of a rarity for the Zelda series.  Link’s Awakening also never overstays its welcome, clocking in at twelve to sixteen hours on Normal Mode. 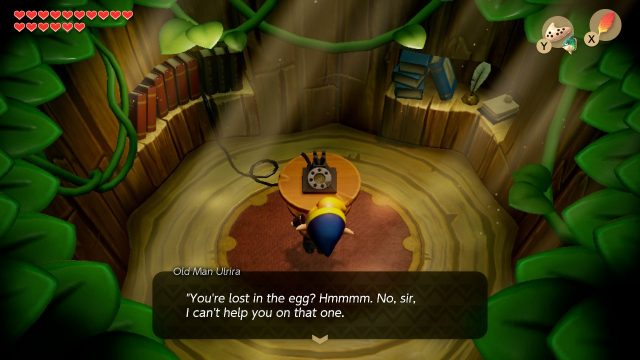 Feeling stuck? The hint system will give Link general directions on what to do next

New in the Switch remake is a riff off the Mario Maker series, where players can build dungeons of their own to delve.  As Link completes more of the game, a larger variety of rooms become available in these Chamber Dungeons.  Completing successively more challenging layouts awards players with everything from rupees to important collectables like heart pieces, so players will certainly want to take the time to delve these optional customizable depths.  The number of Secret Seashells has also doubled, with additional rewards being available to players who track down all 50.  Returning from the GBC version is an in-game hint system — phone booths are scattered around the world, and Link can phone back to Mabe Village and get a tip on what to do next.  As some of the progression clues can be a little obtuse, getting a small nudge in the right direction when needed is the perfect addition.

There are few games that are as adorable as Link’s Awakening, and there’s no denying the clay-ish forms of friends and foe alike are cute.  Enemies vacationing in Koholint from their usual haunts in Mario games fit right into the world, yet are still easily recognizable.  Music on the other hand is a mixed bag.  As the music is limited to the eight instruments found inside the dungeons, there are times when the music feels lacking, or worse, mushy and flat.  All the tunes and sound effects Zelda fans have grown to know and love are here, but they’re a pale comparison to some other titles in the series. 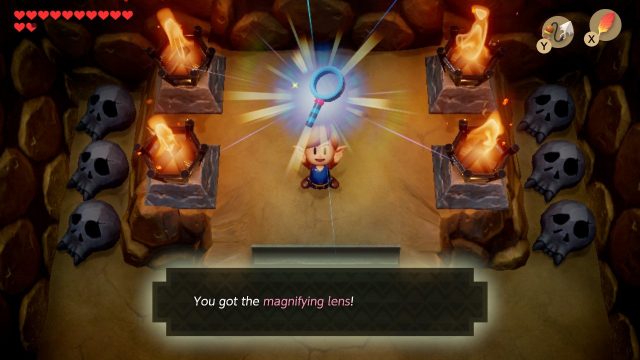 A lengthy item trade chain is required to complete the game

The Legend of Zelda: Link’s Awakening has quickly become my favourite Zelda game to date, and the pacing is a strong reason why I enjoyed it so much.  Every time I thought to myself, “I could really use an item to fill a specific need,” there it was. Combat is satisfying and it feels really good to take down a tough boss.  Grabbing the Seashell Tuning Fork and trying to dig up all 50 is a fun diversion from the main plot and rewarding to boot.  The gameplay is highly accessible, offering both a normal mode for newer players like myself or a more challenging hero mode for veterans.  It’s the perfect game for anyone looking for just the right title to dip a toe into the Zelda universe and proves quality top-down RPGs are not a lost art.