The Legend of Zelda: Breath of the Wild Review

Several years ago, Nintendo delivered us the wonderful A Link Between Worlds, which took A Link to the Past as a base. On top of that familiarity, it broke from many series conventions to make things more open, along with more creative puzzles in dungeons, and an adventure that could largely be approached in an order of the player’s choosing. The Legend of Zelda: Breath of the Wild is very much built in this same vein, but takes the openness to an even greater extreme. The result is an astoundingly large Hyrule, free for the player to wander as they please with nearly no restrictions. Featuring such an intriguing world with many colorful characters to meet, this is one of the finest open world games out there.

Breath of the Wild‘s story takes an interesting approach to the classic series story. Rather than building up Link to be the hero of hyrule, he’s already done that, only in a losing effort. Waking up one hundred years after Link and company failed to stop Calamity Ganon from destroying much of the Kingdom of Hyrule, Link must reclaim his memories and save Zelda, who is still holding back Ganon from being fully unleashed. The story seems to be perfectly paired to the structure of Breath of the Wild, which lets the player go wherever they please after a brief opening area. Memories of the past, and Link’s relationships with other heroes, come back as various locations are visited. This feels logical, and the memories are usually standalone enough to get a good picture of past happenings regardless of the order they are unlocked. Players are free to explore or ignore as much of the game as they wish, so those that choose to follow a straight path to the end may feel like they missed out on the meat of the story.

The land of Hyrule was kept from full destruction, so there is an absolute wealth of other characters to meet and interact with. The various regions have towns full of shops and characters and side-quests to undertake. Players could easily get lured into just exploring the stories and solving the problems in a single area. Of course, much of it resolves back to the calamity a century ago, with emotions from regret to anger at the failed effort to stop it all. Some of the characters could have used a bit more development, but never to the point that any area feels underdeveloped. On the whole, the way the game presents story feels perfectly matched to the open nature of the game. It doesn’t feel like there’s an overriding narrative the player must discover. Rather, the world feels alive, with each region struggling on its own to deal with the effects of the failure to defeat Ganon. 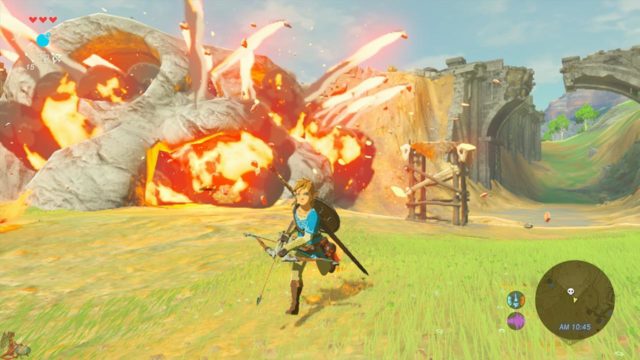 Link with an infinite supply of bombs does not mess around.

Exploring the world, is of course, at the heart of Breath of the Wild. After awakening from his long slumber, Link promptly acquires the Sheikah slate, a tablet-like object that provides the in-game map and other functions. It has slots for a number of special runes, all of which are acquired in the starting area. These provide abilities such as bombs, spawning ice pillars from water, and controlling metal objects. Runes serve as the game’s primary puzzle solving function, allowing for a variety of complex and mind-bending challenges. Each rune is introduced in a small mini-dungeon to quickly learn its use, which also serves as an introduction to the shrine system in the game. Over a hundred of these mini-dungeons are hidden throughout the land, and for every four that are completed, players get to select either a health or stamina upgrade. These challenges, left behind to test the hero, generally contain several puzzles based around a similar theme. A number of the shrines are also combat-based arenas, but the vast majority are puzzle-based. These can provide some of the most challenging puzzle-solving seen in the series, and do a nice job at giving the player a break from exploring the world. A few of the puzzles use motion control and are quite annoying, but thankfully these are very rare and optional, as is the case for all the shrines.

Given the explorative nature of Breath of the Wild, much of the experience is based on the element of survival. Beyond the runes, everything in the game is consumable or breakable. Plants, minerals, and other items found in the game can be cooked into foods and elixirs for healing, temporary bonuses to health and stamina, and even temporary protection from harsh environments such as extreme heat and cold. Weapons and shields are destructible as well, forcing players to make careful use of their arsenal. Destructible weapon systems are difficult to pull off well, but thankfully this title offers a vast abundance of weapons and shields for the player to find. As players advance to harder areas, more powerful weapons with higher durability become available, to the point where most players will have to carefully prune a set of weapons, rather than be at risk of running out of them. As a nice touch, any weapons enemies carry will drop, so combat is very rarely a net loss in terms of weapon count. This provides for a great deal of combat variety as well, as everything from boomerangs and hammers, to small scimitars and massive greatswords can be acquired.

At its base, the combat in Breath of the Wild is similar to the style the series has used since moving into 3D with Ocarina of Time. Players can lock onto enemies, dodge, block with shields, and perform all of the easy to understand abilities familiar to the 3D games. Enemies hit particularly hard, so some of the finer wrinkles in the combat are particularly useful. Well timed dodges and parries open enemies up to a flurry of attacks, and a few bosses and tougher enemies are nearly impossible to beat without using these. Of course, shield parries use durability, and weapon flurries undoubtedly wear down your armament, so battle is as much about carefully managing resources as it is about surviving against the challenging enemies that fill Hyrule. Thankfully, switching weapons and shields is easy thanks to quick menus that pause the game and allow for swift selections. The only annoyance with these quick menus is the lack of a fluid way to drop current gear to pick up better ones the player finds. The menu actions needed to do this aren’t too bad, but enough to cause frustration when a large selection of better gear is found. 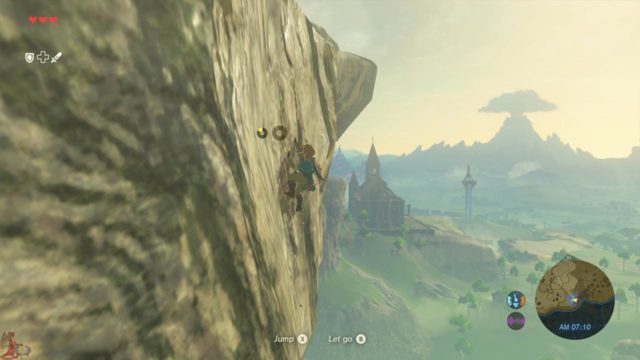 The breathtaking views in Breath of the Wild are quite numerous.

All the disparate elements of the game fit together quite nicely, giving the world a feeling of logic and freedom. Almost anything can be climbed providing the player has enough stamina, so nothing ever feels like an artificial wall impeding the player’s progress. If it happens to rain while a player is climbing, it will impede their ability a great deal. While this makes things realistic, it can be frustrating when a storm comes along in the middle of a long climb. The abundance of shrines to complete helps keep a sense of progress as the player explorers, even during lulls in between major quests. Ganon’s fortress can be tackled whenever the player pleases, meaning there are few limits to what can be done in what order. Those that explore the world and complete the main dungeons will, of course, be better equipped with gear and abilities to tackle Ganon. The result is a wonderful sense of adventure, allowing players to explore as much or as little as they please and challenge themselves in whatever way they can imagine, such as taking down Ganon using only a mop.

From an audio-visual standpoint, Breath of the Wild shines, whether played on the Switch’s screen or on a TV. The cartoony style looks and moves fluidly, and character designs and animations are varied and entertaining. The attention to detail is quite stunning. This includes things like wind blowing the grass, the flow of rivers, rainstorms, sandstorms, snow, and even forests teeming with wildlife. A few more enemy types would have been welcome, but there is enough variation in equipment and sub-types to keep combat fresh for the majority of the adventure. The game runs smoothly, with only rare minor framerate dips and popup. It is quite surprising for a game of this size.

The audio does a fantastic job of accentuating the experience. Music mostly stays in the background, only coming more to the forefront when reaching important locations, engaging in combat, or visiting towns and other safe areas. The pieces are beautifully composed, with some interesting new themes specific to this game, along with many familiar classics. There is one annoyance in the audio design, and that is the Sheikah sensor. This function plays a repeating beep when the player is near a shrine, or items specified by the player. It repeats frequently at an annoying pitch until the player actually gets to the shrine and can get quite tiresome. Thankfully, the feature can be turned off.

Breath of the Wild is a stunning achievement in terms of gameplay, technical detail, and world building, making the overall experience just fantastic. The Zelda series is certainly no stranger to quality, producing high quality titles since the days of Link to the Past. Never, though, has there been a Zelda quite like this. The openness of its structure brings a breadth of adventure that the series hasn’t seen in a long time. It is not only a fantastic game in its own right, but provides a base for the series to build on for years to come. This instance of Hyrule is a joy to explore, and no fan of adventures, or games in general, should miss out on this title. 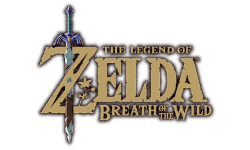