The Hand of Merlin Review

The legend of King Arthur has been told in many ways.  Croteam and Room-C Games joined forces and put their own interesting spin on the story in The Hand of Merlin.  This roguelite tactical RPG has some unsurprising twists such as King Arthur being dead and Merlin being drained of power.  However, a world coming under siege from eldritch horrors from another dimension provides a unique take.  A brilliant soundtrack that mixes science fiction with fantasy and an engaging combat ensure that the game delivers a delightful time that breezes by.

The premise of The Hand of Merlin is ingrained into the roguelite nature of the game.  Just as the otherworldly evil was about to be banished, Merlin’s powers are drained, Arthur is killed, and Morgana leaves.  Parts of the world had come to an uneasy peace, but the veil tears once more and abominations swarm the land while humanity once again wars with itself.  Merlin uses the little energy he has left to embolden hosts in different realities so that one might be able to gather a band of heroes and vanquish the evil.  Merlin tasks his knights to take the Holy Grail from Albion, through Charlemagne-era Marca Hispanica, then the Reconquista-era Al-Andalus region, until sailing the Mediterranean Sea to the Holy Land to reach the heart of the tears in Jerusalem.  These in-depth looks at the historical time period are very welcome and provide interesting context, even if a lot of it is backdrop for the latest abomination incursion.

The same trip is at the heart of every run through the game, but each takes place in its own world with many details being different.  Available side quests, how characters interact with the player, and even nation leaders can differ in each run.  The journey sees players travelling from the upper left of the large map to the bottom right through numerous nodes.  These nodes contain interesting isolated stories that mix Arthurian lore with history.  There is a lot of thought and care in each quest and location, but there are many more isolated stories than nodes in a given run.  While the individual stories work well, the way pieces need to be able to slot in makes it impossible for the game to provide a fully cohesive overall plot. 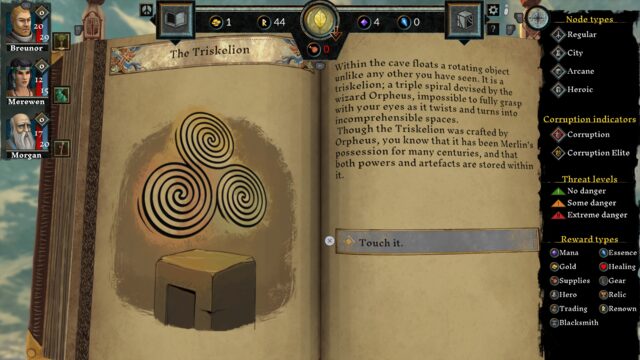 The detail on the events is in high quality, even the illustrations are intricate and woven with historical significance.

As players travel the world map, they get a hint of what might await them at the next node.  Nodes break down into a particular type of event: regular, city, heroic, or arcane.  All events feature an isolated story or a combat encounter, and sometimes both, with cities providing places to heal, shops, and a list of possible rewards gained from the event.  Non-combat stories either have the player lose some wealth or give players a sequence of card draws to determine the outcome.  Arcane events can include meeting a powerful magical figure, which can end up with players unlocking their spellstone.  Spellstones allow players to learn new spells but require arcane essence, a rare resource.  These spells are highly useful in combat, letting players provide healing, extra damage, or other boons to their heroes.  Spells can be crucial for some of the boss fights found at the final node of each map, as some are needed to complete stages of the fight against the abominations, but must be used wisely, as players gain just a single mana point per combat.

Though the game features human opponents, abominations are the primary antagonists and offer the bigger challenges.  Human enemies have lower health and more straightforward abilities, while otherworldly abominations provide additional threats such as exploding at their demise, using spikes to return damage inflicted by nearby knights, and trailing a corrosive armor-damaging ooze.  The higher nature threat is reflected in the game’s designs, with player characters and bandits alike having plain designs in comparison to the eldritch horrors of the abominations.

When combat begins, the player’s party acts first with the enemies following after.  Obstacles dot the landscape allowing fighters to hide behind them and become harder to hit.  All combats have the winning condition of defeating all enemies, and while most encounters differ in map designs, boss fights have their own set location.  Both allies and enemies have a health bar as well as an armour bar.  Armour needs to be drained first, but some specific abilities allow to drain health first.  On a normal difficulty playthrough veterans of the genre will find the game to be pretty easy, but the challenge ramps up at higher difficulties as well as on the game’s endless challenge mode. 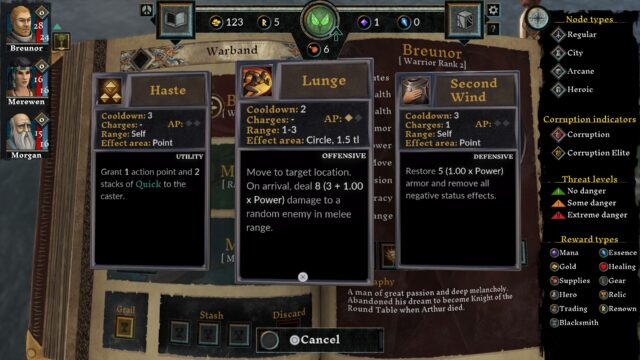 Just three of the numerous abilities in the game.

In each run of The Hand of Merlin, players choose three knights from the unlocked pool of knights available.  There are three classes — warrior, ranger, and mystic — with the initial pool featuring one of each.  Additional characters are unlocked as players fulfill certain criteria by playing the game, with each new knight slotting in to one of the three classes.  These new characters vary based on their starting sets and passive abilities.  Knights begin with two abilities and all of their passives, but as they gain levels, knights unlock new abilities until the full compliment of four at a rate of one ability per level.  Afterwards each ability goes through a set of upgrades, than a second set after that’s all completed.  New abilities are obtained from a choice of one-of-three, with each upgrade getting one-of-two options.  This means that simple starting abilities like a ranger’s shoot, can be upgraded in multiple ways, adding debuffs to the attack or adding damage to make each version distinct from the other.  The massive ability pool can feel a bit overwhelming at first, but the passive abilities help determine what role each knight would be suited for.  For example, Bruenor has a passive ability that causes one stack of health damage to enemies on their next turn every time they pass through their melee range.  This helps make Bruenor more capable as a melee attacker and to select later abilities to compliment these passives.  Mixing and matching is a big part of the fun though, to find new ways to devastate the abominations.  Every class has the possibility to slot into any roll, with the worst of cases still leading to those knights being viable jack of all trades.

Every ability has three attributes to keep in mind.  The first one is a cooldown counter, which indicates how many turns that ability needs to become available again.  This counter can range from zero turns to three turns.  An ability with a zero turn cooldown will still not be available all the time, because the second attribute of each ability features a maximum amount of charges available for each combat.  Even if there’s the rare ability that has unlimited charges and no cooldown, the third attribute is an action point cost.  Action points are used for movement or for certain abilities and cap out at two normally per turn, with some skills and buffs pushing that total higher.

Relics can be found throughout a run and can be equipped to a character for an interesting passive or reusable ability.  Relic abilities tend to be within the game’s massive buff and debuff framework and can definitely change up gameplay when a strong one is found.  Players always start with one, as the new King of Camelot, who is randomly chosen each playthrough, gives them a slightly different variation of the Holy Grail, which can be equipped by any character.  The other piece of equipment players can receive is an upgradeable weapon and armour, these can be found as treasure or bought from a blacksmith and will provide boosts to a character’s attack or armour stats. 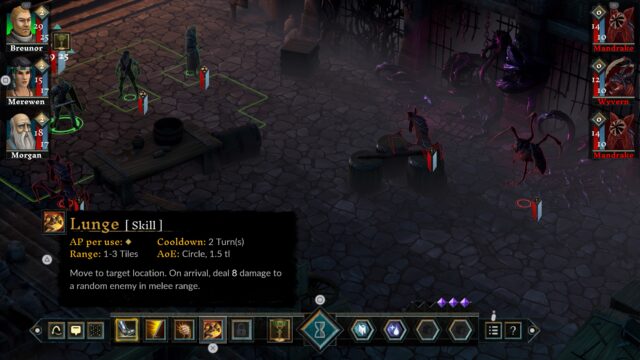 An introduction to the abomination as they slowly infest the world from the veil.

The Hand of Merlin has an impressive soundtrack at its disposal.  Early tracks feel right at home in a fantasy adventure, but as the journey progresses moments of ramping tension and foreboding ambient sounds begin to emerge.  The sound melds effortlessly into science fiction when players face off against abominations, creating an amazing blend of genres. The stellar soundtrack does make the sound effects and the narration at the beginning and the end humdrum and less impressive by comparison.  The game’s atmospheric work takes tried and true dark ages fantasy and adds in grotesque eldritch monstrosities that look straight out of a horror movie.  Animations for combat are serviceable but do get repetitive, making the main draw the designs and the variety of ways to use the abilities.

The Hand of Merlin is a quick tactical roguelite game with enough otherworldly energy packed into it that causes the short completion time to breeze by.  With each run being only a few hours, players have the opportunity to try out new combinations that combine classes with various abilities to find new ways to create unstoppable machines of destruction.  Abominations need this level of dedication because one slip up and they’ll tear through players quickly, creating a test of player’s strengths and strategies to see if they can succeed.  The game holds nothing back in presentation, including an addictive genre blending soundtrack as well as a ton of depth to its lore and world building.  Fans of tactical games and roguelites should check it out.

Spirit of the Island