A world far across the endless expanse of space, Thra is a seemingly peaceful planet with a mysterious Crystal that bore all life upon it, including the guardian Aughra.  Tricked by the alien Skeksis race, Aughra leaves the care of the once pure Crystal in their hands.  A thousand years have passed, the Crystal has become thoroughly corrupted, and the Skeksis sink to new lows to hang onto their ill-gotten immortality.  A rebellion is brewing, and this is where The Dark Crystal: Age of Resistance Tactics picks up the tale.  Based on the 2019 Netflix prequel series of the 1982 movie The Dark Crystal, Age of Resistance Tactics retells the series through the lens of a tactical RPG; but while the title promises much with a fun graphical style and interesting combat mechanics, it falls short in numerous gameplay aspects.

While the story is essentially a retelling of the action segments of the recent Netflix series, there are enough gaps that the game may be a little confusing to those who haven’t seen the series, and some familiarity with the source material is helpful. The game’s abrupt scenario changes make significantly more sense in the serial and certain things left deliberately vague in the game — such as why Princess Brea escapes from the palace, Dee’s mysterious well of prophetic knowledge, or why only certain Gelflings have wings — are better explained in the show. Those only experiencing Age of Resistance Tactics won’t know what they’re missing, while those who’ve experienced both will have a better grasp of the nuance partly lost in the translation from live-action puppetry to game; neither is better nor worse, just different.

Combat is where the game reaches its highest highs and lowest lows. Taking cues from classic titles like Final Fantasy Tactics and building upon that base, maps are kept small, abilities are limited in number, and party size is low, though there’s no lack of variety in strategy options.  Nearly all physical classes have a mix of melee and ranged attacks, and how the player chooses to combine them can drastically alter party formation.  Those excelling in melee combat can use the debuff Mark on their foes, which not only lowers the evasion of targets, but allows the use of many abilities across multiple classes.  For those preferring magic offensive or defensive, there are classes that specialize in each.  Conversely, there are also classes like the Musician, which, when buffs have been applied, can set off abilities that impact the entire battlefield. 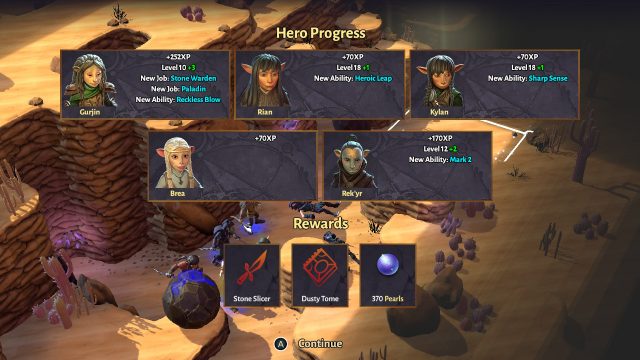 All seven clans are eventually represented, with thirteen playable characters.

While the classes are by and large well balanced, the requirements for some of the advanced classes are rather disparate, with the single advanced magical class requiring at least fifteen levels in pure warrior classes. It’s an unusual choice for progression and makes certain intermediate classes more powerful and, importantly, more accessible than the advanced classes.  Every character can equip three abilities from their current class, and two abilities from their secondary class.

Unfortunately, while the basics sound great on paper, in practice combat doesn’t quite pan out.  The enemy AI is dotty at best, and outright foolish at worst, even on higher difficulty settings.  It’s a little silly to see the opposing force filled with enemies that can cast strong debuffs or turn the tide by charming the player’s party, only to find them wandering around the map witlessly.  Equally baffling are enemy healers who never cast a single heal, even with difficulty set to the highest.  While the game offers a trio of difficulty options — Story, Normal, and Hard — these lack any description as to what exactly these entail until the player unlocks the New Game+ option, much later than is actually helpful.

One cue that could have been left behind from Final Fantasy Tactics is the frequent need to grind side battles; just playing through the game’s main story missions will leave players short in both experience and funds.  This is especially frustrating as monetary resources, known as orbs, are quite scarce, and players will be consistently lacking in the needed funds to equip a full team. To make up the difference, side battles need to be completed repeatedly to ensure each character has adequate weapons, armour, and trinkets to take on progressively difficult challenges.

Furthermore, the game’s first set of levels, intended to act as the game’s combat tutorial, are a little frustrating in nature.  Not only does it jump around multiple characters and groups, the game invariably teaches players a new feature or function — like flying, or using map features to do additional damage by shoving enemies into them — before killing off the character sampling these abilities; making players re-earn those abilities on remaining party members.  While the source material calls for all these deaths, this section is perhaps a little too close to the show and would have done better by straying slightly as the game does in several instances, such as Brea’s relationship with Lore being completely rewritten and Aughra’s storylines being almost completely dropped. 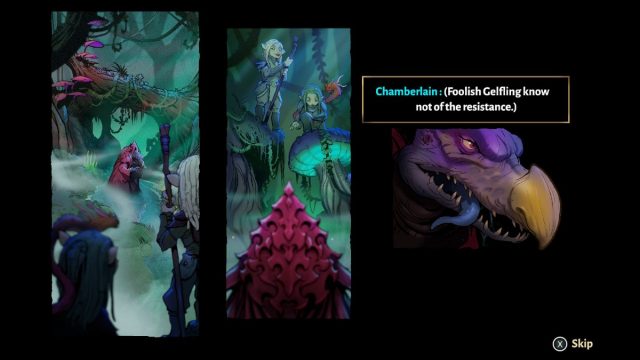 Short vignettes fill in where plot points don’t otherwise fit but are needed for story progression.

Thankfully, the graphical style of the serial makes the jump to game quite well, preserving the unique, nearly clay-like look of the Gelflings, while retaining the ragged, sharp-edged and dangerous feel of the Skeksis.  Both look great both in menus as well as in combat, with solid animations.  The culture of each of the seven clans shines through with the Podlings, who have their own unique classes, animations, and abilities.  Enemies driven mad by the curse of the dying land all feel pulled straight from the show.  For instances where the in-game engine doesn’t suit the tone, comic book-style vignettes add in additional storytelling elements, which look great.

On the other hand, for a show that creates much of its flavour through sound and music, the game sadly lacks in both departments.  There’s minimal voice work, the sound effects are rather muted, and there’s a lack of music variety, particularly around combat maps and on the overworld.  It continues a consistent trend throughout the game of ample interesting ideas, but faltering execution, but at least the game does not outlast its welcome and can be completed around twelve hours if playing on the easiest difficulty and within twenty if playing on the hardest setting, including time spent in optional maps.

The problems that The Dark Crystal: Age of Resistance Tactics has don’t automatically make it a bad game, it just doesn’t have enough pros to let them be overlooked.  While the combat has the potential to be great, it’s dragged down by foolish AI, artificial resource starvation, and a lack of interesting music tracks.  There will be some fans who will find content here to enjoy, however, with the vast breadth and depth of the Nintendo Switch library, those looking for quality games can no doubt find better candidates elsewhere.