Back in 2010, an arcade card game called Dragon Ball Heroes debuted in Japan that allowed players to build their own deck of physical cards to scan and play. It presented fans with alternate scenarios, non-canonical transformations such as Super Saiyan 3 Future Trunks, or new characters such as Gohanks, who is the fusion of Gohan and Trunks. The game’s what-if scenario gimmick and collectable cards has held tremendous popularity in Japan. Now, it has managed to make its way west. Super Dragon Ball Heroes: World Mission for Nintendo Switch is the newest take on bringing the arcade game from Japan to a home console, sans the need for physical cards.

At its heart, Super Dragon Ball Heroes: World Mission is a port of a popular Japanese arcade cabinet that involves collecting cards, building teams with said cards, and battling it out against other teams. It contains some RPG elements where the players create a character and choose from an assortment of races: Saiyan Male, Saiyan Female, Namekian, Android, Majin, Frieza Race, Supreme Kai, and Dark Demon God. As players progress through the game, they gain experience points and level up, in addition to gaining new character cards.

The battles play out automatically for the most part. Players have a prep phase deciding which cards are active. Each side can deploy up to seven character cards. Character cards are divided into different classes: hero, elite, and berserker, each with its own special strengths and weaknesses in combat. Hero types tend to have strong defence, berserker types have strong attack and weak defence, and elites have high stamina. The fights play out in a lengthy scene of smashs and ki blasts where players do not directly control the combatants except during row placement and quick time events that require players to mash the ‘A’ button at the correct time time to fill a bar, boosting either attack power or defence when successfully done. 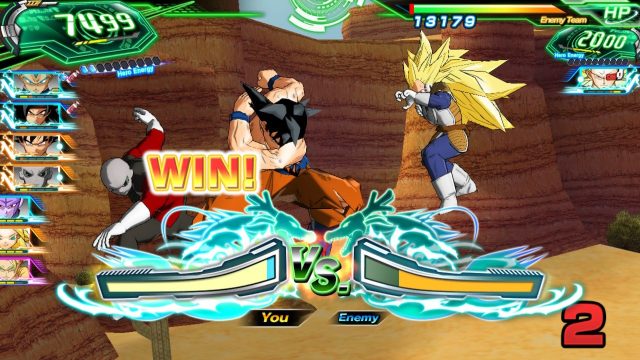 Jiren and Goku team up to take on Super Saiyan 3 Vegeta.

The rules of battle are quite simple. There are four rows to place each card, each row having a different effect on the card. Front row provides the highest attack power, but drains the most stamina. The rear, support row recovers stamina, but doesn’t allow for attacks. The player must know when to conserve stamina, or when to send characters to the front to burn stamina and bolster attack power. The goal is to reduce the enemy’s health to zero. Tailoring the deck and timing these manoeuvres in battle make up the bulk of the strategy in this game.

There are several game modes: arcade, story, and an online mode. Arcade mode provides loads of single-player content categorised by chapters and sagas. Story mode plays out similar to an RPG where the player can gain experience, level up, buy and equip items, and progress through the game’s plot. Online mode, of course, pits players against other players online.

Story mode’s narrative is pretty straightforward. It’s about a boy who moves into Hero Town and wants to become the best Dragon Ball Heroes player, but characters from the Dragon Ball world start invading Hero Town, and it’s up to the boy to travel to the game world and combat this menace with his deck of cards. The plot won’t provoke deep thought or move emotions, but the what-if scenarios cater to the Dragon Ball fans, and there are a few humorous cutscenes between the characters of the anime and the inhabitants of Hero Town. But the story isn’t this game’s strength. 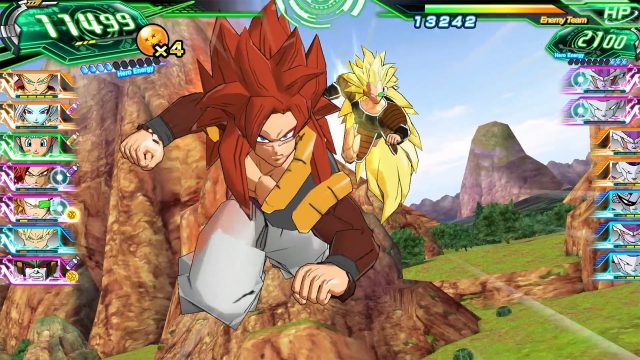 Get used to watching these scenes… Over and over again.

Super Dragon Ball Heroes: World Mission is really about the cards and the insane amount of fan service it offers. For starters, players can collect the most outrageous character cards, such as great ape Broly, Super Saiyan Raditz, or crazy fusions like Vegenks (Vegeta and Trunks). Progressing through the game wins more cards, which is nice, because in the original arcade version, players would have to pay money for the actual physical cards to play.

Beyond the story and arcade modes, there are additional modes such as card creator and multiplayer PvP. Card creator is this game’s coup de grâce, as players can make their own custom cards featuring any unlocked character. This feature can give the weaker characters from the series a new meaning to life by adding powerful super attacks, abilities and combo attacks. Players can even take Yamcha and make him god-like. The list of options is only limited by the abilities unlocked and the player’s creativity.

With more than 1,000 cards to collect, completionists will find joy in collecting them, each having its own unique and gorgeous illustration. Custom missions add more variety to the gameplay, creating interesting fights such as three gods of destruction versus seven Saiyans; fans can create the team and battle of their dreams. 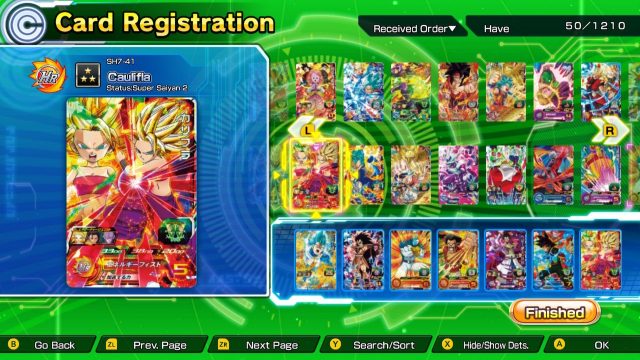 There are more than 1,000 cards, spanning content up to the Tournament of Power story arc and the Dragon Ball Super: Broly film.

Despite the numerous features, there are few obvious things that plague the game. The first is the gameplay. The balance is off. Severely. Winning involves simply having the most powerful character cards, rendering decks with weaker character cards obsolete regardless of strategy. Whenever there are two players with equally powerful decks, the deciding factor of battle rests on whoever is better at timing the QTE mini-games. As a result, the gameplay becomes simple and monotonous, especially in single player mode where a god-tier deck can clear through the story without difficulty.

The audio is another culprit. Some of the spoken lines sound low-quality and are difficult to hear. This may be due to the recordings originating from an arcade cabinet. Fans who dislike the original Japanese voice actors face further disappointment with this game. All of the audio is in Japanese, and not everything is subtitled, especially character phrases from battles. On the other hand, the music is decent enough, and there are several vocalised tracks in which players can set up to play wherever.

The graphics seem quite aged, too. They resemble the old Dragon Ball Budokai games on the PlayStation 2, meaning this game doesn’t make most use of the Switch’s processing power. However, the antiquated graphics don’t detract as much from the game as the repetitive animations do. Prepare to see loads of the same attack animations over and over and over again with little variety despite the numerous characters in the game. The newer character models, such as Ultra Instinct Son Goku, seem to have a shine of higher quality, though. The card illustrations, based on the actual physical cards, look fabulous as well.

Not being a fan of card games myself, I approached this game with low expectations. I found myself pleasantly surprised by the game’s addicting nature, compounded by the robust content and fan service. I spent many hours trying to unlock more character cards and scenarios. Super Saiyan 3 Vegito. Various non-canon transformations of Broly. I even got a character card of Bulma, which I immediately added to my main deck. Despite the immense fun factor and extra features, the card game itself isn’t compelling enough to entice those who are unfamiliar with the anime series. However, devout fans of the Dragon Ball series should find plenty of content to feast on here.