Keeping track of the Kunio-kun, aka River City, series and all of its releases, plus the Americanised versions created for western audiences, since it began on the Famicon/NES is not a simple task. However, at the franchise’s heart is a brawler series featuring high school students that was originally created by Technos Japan and has since been taken over by Arc System Works. While spin-off River City Girls allowed Wayforward Technologies to come in and put a fun twist on the series, including lots of charm in the process, newest title Stay Cool, Kobayashi-san!: A River City Ransom Story is an in-house work that features very little of the charm, turning into a cheap-feeling experience that quickly lets any interest slip away.

Stay Cool, Kobayashi-san! stars the eponymous Masao Kobayashi, a former rival of series star Kunio. Kobayashi meets Mizoguchi, a time-traveler from the future who has come back to tackle an evil space-time disrupting organisation. The game invites players to create a character, choosing a name, gender, and relationship with Kobayashi, though this character only appears at the very end, being held captive by the final boss after being taken by said organisation prior to the very brief introductory exposition. Kobayashi joins with Kunio and Mizoguchi to send these goons from the future packing. 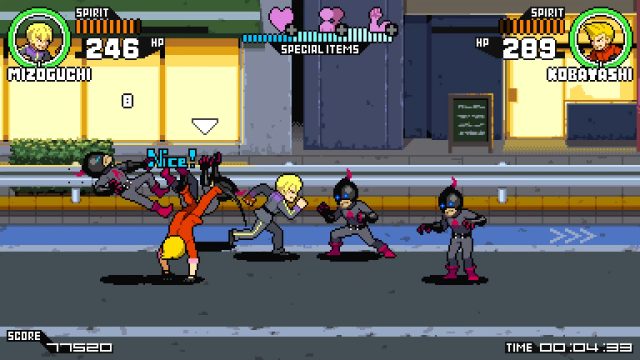 Players will need to beat up a minimum of 150 of these guys of varying uniform colours to be able to finish the game.

The story ends up as a rather incoherent mess. Assorted characters show up at numerous times to say something and then wander off again, which come across more as arbitrary cameos from past characters than anything useful for the plot. The localisation doesn’t help matters and looks like it was simply given a quick pass without any contextual editing offered to have it make sense. Given that the entire purpose of the game is to go from screen to screen beating up whatever happens to be there, players are really just better off clicking through the text than trying to decipher anything meaningful from it.

The objective of Stay Cool is to beat up enough grunt enemies to force the bosses to appear, and once all five bosses have been pounded into submission, to beat up the final boss and rescue the girl/guy. There are five enemy types, each of which appear in different portions of the city, which is navigated by running from one screen to the next. Players must beat up thirty of each coloured enemy, which usually appear in batches of six, for their associated boss to appear on the very next screen.

Combat sees Kobayashi joined by either Mizoguchi or Kunio, though they can be switched between at any time. The game features single and two-player, with the AI taking over the second character in single-player. It’s a simple system of hitting circle to beat up enemies, with triangle used to contextually jump or do an aerial attack, which can be abused for near infinite combos on certain bosses, provided they get hit into the right spot and players can time the button press correctly. There are also special attacks using the cross button, which can be charged up. Meanwhile, a set of bonuses can be activated if an energy bar is sufficiently filled, which can provide a bit of emergency healing, some AI-controlled assistance from other characters from the series, or a temporary attack boost. 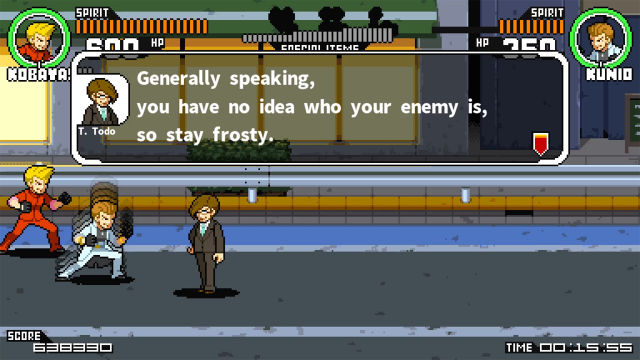 Thanks, that was immensely helpful.

If an enemy is knocked down and players are within a certain distance, they will do an AoE attack around them, likely to prevent players just waiting next to them to unleash another beating. However, this ends up being aggravating, especially on bosses or when one has attempted to launch a combo only for the timing or contextual selection to be slightly off, as it often gives players either too little time to move away or, if they have moved away, enough time to launch a free shot at the player. The final boss is the greatest abuser of this and is made even more annoying by having multiple attacks that feel both overpowered and impossible to avoid. There is a small amount of hidden depth to the combat system, such as how players can stay upright with 0 HP if they time a recovery action correctly and take direct control of the summoned helpers, though the game does a very poor job of illustrating it. The combat ends up feeling just about sufficient for its general purpose and its annoyances aren’t mitigated by anything particularly worthy of praise. It tries to throw in a bit of variety with some spaceships, but these simply get in the way of progress rather than doing anything to alleviate the monotony.

The game does have a character upgrade system, but it is entirely separated from individual playthroughs and can only be accessed from the title screen. Players can spend points, earned by defeating bosses, on a linear set of upgrades to each character — including summoned ones — which are applied to any ongoing or future playthroughs. The retro visuals are fine but immediately forgettable and the same goes for the audio, except for the highly distracting Japanese voiceover of every little option on the menus.

Stay Cool, Kobayashi-san! can easily be completed in under two hours, and the online rankings indicate that under ten minutes is readily doable once upgrades have been purchased. The game features multiple endings, though these are anticlimactic involving a tiny interaction based on those initial created character choices. There is a “true ending”, which is achieved by defeating the bosses in numerical order, though this order is only revealed in the text when meeting the bosses for the first time, so it is incredibly unlikely to get the first time. In the end, I’m not even sure if the game was even worth those few hours, and is one best left forgotten.