Sidebar Games found success back in the Switch’s debut year with Golf Story, a fun adventure that evoked fond memories of Game Boy Color-era Mario Golf. The studio went ambitious with its follow-up Sports Story, expanding into other recreations and going further with its dungeon-crawling and puzzle elements. While technical issues are notable, its biggest problems appear to be more fundamentally scope-related as the attempt to branch out ends up creating a title that feels widely disjointed. The game still has its fun moments, but there’s a definite sense that it’s bitten off more than it can chew.

Sports Story sees the protagonist of Golf Story embarking on a trip with their Coach, Coach’s niece, and fellow golfer Lara. Meanwhile, the golfing conglomerate PureStrike is going around buying up everything else sporting related it can get its hands on. Various shenanigans ensue as the protagonist gets willfully caught up in a variety of quests across themed locations involving different sports, though golf largely remains at the forefront.

Sports Story’s narrative is primarily a framework to get players to go the next cartoony location, but even then it feels haphazard and the lack of a real overarching storyline negates any feeling of accomplishment after a location’s individual questline is completed. Each individual location has a more constrained and clearer arc to follow, allowing them to more entertaining in their own way. The writing is still humourous, with plenty of the self-referential and melodramatic comedy that both it and its predecessor pulls off very well. However, the humour overly relies on text animations, and with the game lacking a button to skip through them, there are many cases where having to wait for the text to appear gets tiresome. 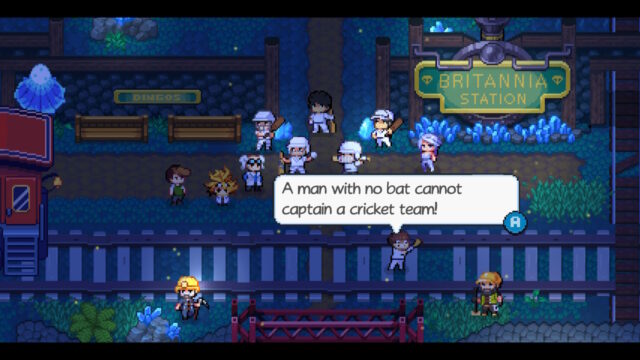 Although the main story is haphazard, there’s some fun self-referential and melodramatic humour.

Some of Sports Story’s more engaging parts come in the exploration and dungeon-crawling sections that form part of its main quest as players wander around the various locations on the map, with the best parts evoking fun top-down adventure-style puzzles with an added golfing touch. The game packs enough nooks and crannies with item or money rewards to make fully exploring areas worthwhile, as well as adding a good amount of small individual challenges around the various locations. The game’s underwater temple is the most enjoyable dungeon and makes the best use golfing puzzles, coming with its own “boss fight” even if there’s no actual danger from it given that there’s nothing approaching combat and any sort of failure warrants a simple retry.

Sports Story’s golf system utilises the traditional three-button press control system for all shots except putting; the first press starts the power meter, the second press stops it, and the third press determines shot accuracy. Players can change where they strike the ball to adjust its flight and bounce with a draw, fade, top-spin, or back-spin. Putting simply uses the power button presses, with players having to read the arrows on the green to judge where the ball will roll. It’s a well-worn system that works perfectly fine once again here, but there simply aren’t that many interesting golf courses to play on or any real in-game reason to return to courses to play further rounds. 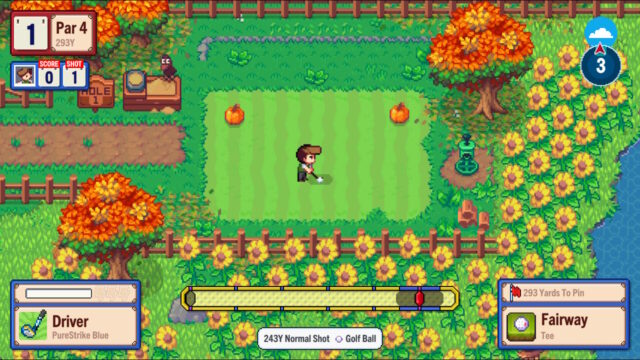 Golf controls will be familiar to most of those with even just rudimentary golfing game experience.

There are rare occasions where players finally get to play a dedicated round of golf or participate in a tournament. However, while the game keeps track of the player’s score — and notes birdie badges for completionist purposes — the lack of any other scoreboards or standings indicates that the player’s actual performances have no impact on progression or success. The only true sporting contests are the all-too-brief matches in the tennis academy section. There is a level-up mechanic that ostensibly earns players upgrades in their golfing power, control, and strike attributes, but it’s hard to actually get any feel for how much they help. There is also a licence mechanic that grants promotions as players complete optional challenges. Not upgrading one’s licence can become a brief progress barrier, but there are more than enough challenges available to quickly meet the requirements and it otherwise has little impact. Various items can be purchased, some of which offer equipment upgrades or are needed for quest progression, but money is relatively easy to come by and there is little else worth purchasing.

After golf, fishing and tennis get the biggest treatment in terms of player participation, followed — in order of in-game importance — by cricket, BMXing, soccer, volleyball, RC cars, and baseball. The latter trio only appear incredibly fleetingly, while BMXing and soccer are primarily relegated to optional challenges, BMXing in particularly being the source of a mixture of both highly frustrating targets and bugs. It’s all a bit unfortunate there are clear potential bases that each of these sports can be built upon. Even those sports that are given more time, including golf and its lack of proper contests, just don’t get the proper opportunity to show what really makes them tick.

Like its predecessor, Sports Story has some technical difficulties at launch, with a number of notable bugs and an inconsistent frame rate. During the review playthrough, however, all of the bugs impacting main story progression could be fixed by restarting and reloading the autosave, usually with only a few minutes of progress lost. The bugs are more of a footnote on top of the more fundamental scope issues that Sports Story seems to suffer from. While ambitious, the attempt from this small indie studio to cram so many different activities into the game doesn’t give any of them room to breathe. The result is a general scattergun feeling to the entire game, as many elements are thrown out into the ether, resulting in a lack of any real sporting competition and numerous story threads left hanging or abandoned in a rushed conclusion. 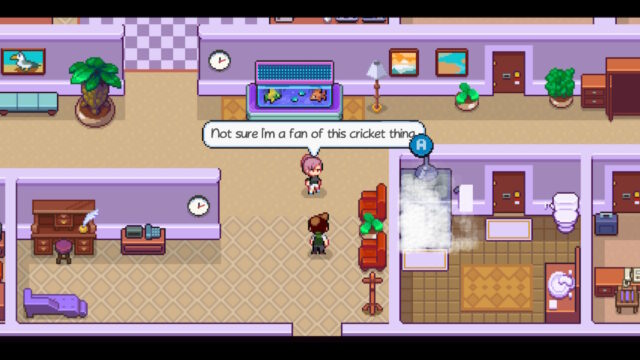 An understandable reaction from anyone who’s just been given the explanation of a nightwatchman.

The visuals are a minor step up from Golf Story’s; its sprite-based graphics work nicely to give a nostalgic feeling in line with the Game Boy Color games that inspired it, while providing plenty of touches that give the game its own character. The varied locations and colour palette are interesting enough, though aren’t particularly memorable outside of their base themes. The music is another high point, with plenty of catchy tunes throughout the game. The sound effects and use of rumble work together well too, fitting in with the game’s visuals and comedy.

It was always going to be tough to follow-up Golf Story in an interesting manner, and one certainly can’t say there was a lack of ambition in what Sidebar Games was trying to achieve in Sports Story. However, fulfilling that ambition is another matter entirely, and ultimately the game leaves a sense of what could have been. Sports Story still has its moments and those who enjoyed Golf Story will be able to find some enjoyment at least. The game ultimately overshoots the green, but hopefully useful lessons will be learned in time for the next approach.