A Tale of Two Sisters

Reply Game Studios’s action RPG Soulstice draws a number of immediate comparisons upon starting it up. Belying its obvious namesake, its fast-paced, high-octane combat system is instead highly reminiscent of Capcom’s Devil May Cry series or PlatinumGames’s Bayonetta franchise. Similar to those games, combat is frantic and challenging, with a high degree of aerial acrobatics for players to master while downing foes. With a robust difficulty and many combat options for players to master, the game’s meaty campaign offers a satisfying and well thought-out experience, with the promise of more entries to come in the future.

Soulstice takes place in the kingdom of Keldas, a world that once came close to a catastrophic event known as the Soulstice but was saved by three legendary heroes. Now, history threatens to repeat itself as a Tear has opened in the Veil between dimensions and admitted ghastly creatures known as Wraiths into the world. The entire game takes place within the city of Ilden, one of the three holy cities built to honor the three legendary heroes who once saved Keldas. Ilden has been ransacked by the Wraiths, its population decimated or turned into Wraiths themselves. Players take on the role of Briar, an agile and fierce warrior who has been sent to Ilden by the Order of the Ashen Blade in order to quell the looming Wraith threat. 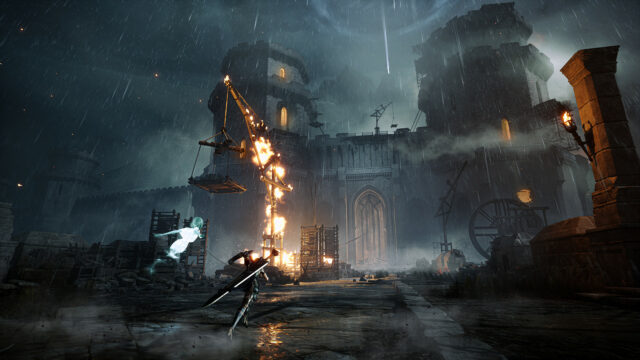 The city of Ilden is an expansive, hostile place. Briar and Lute have their work cut out for them.

But Briar is not alone on her desperate quest. Her sister Lute is always by her side as a ghostly Shade, at times protecting her in battle or buoying Briar’s abilities with powers of her own. Through a special ritual, Briar and Lute have been inseparably bound together by the Order and reborn as a Chimera, a powerful entity consisting of a living Knight and their Shade. Though Briar and Lute’s past is initially shrouded in mystery, their story comes to light more and more as the plot unfolds. The writing is passable and narrative beats plentiful, and while it isn’t the most original or subversive plot imaginable, it serves to move events along and provides a tapestry for the cast of characters to become slowly more fleshed-out.

Although the whole of the game takes place in a single city, its scale is impressive. Ilden is a massive port city, and over the course of the lengthy campaign (spanning twenty-plus stages and easily as many hours) players will explore many districts from the waterlogged harbor to the impressive city walls, from the sewers to the seedy Low Town, and even a derelict monastery, amongst others. It’s a dark and well-realized medieval world that’s a joy to behold, the kind of setting any Soulslike veteran will feel right at home in. Unfortunately, for all its intriguing geography just begging to be poked around in, Soulstice is fairly light on actual interactivity, with levels that, despite lots of corners and some verticality, generally just funnel players forward, up, or down toward the next encounter; one can’t escape a sense of wanting something more beyond eye candy and intriguing set dressing. 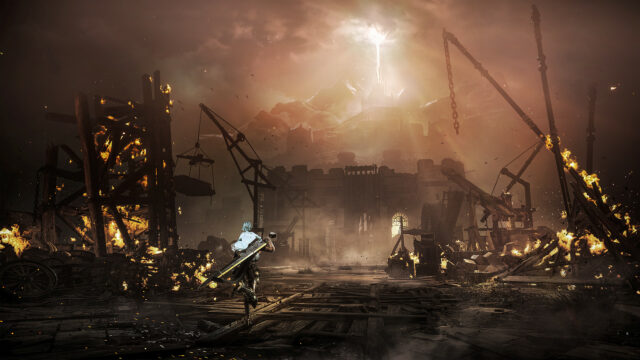 The Tear in the Veil, always visible in the far-off distance, is deceptively far out-of-reach.

Advancing from point A to point B in Soulstice may be straightforward directionally, but that’s not to say it’s entirely simple, with platforming and light puzzle-solving involved in traversing the environment. Whether ascending crumbling towers, stalking across deserted battlements, or leaping between rooftops, progress frequently requires smashing crystalline blockades, restoring power to dormant elevators, or opening up the occasional shortcut back to an earlier area. As the game progresses, Briar and Lute gain new abilities that assist them in these platforming sections, including ways to materialize invisible blocks and platforms or remove otherwise-unbreakable barriers.

The game’s core, though, lies in its deep combat system, and it’s here that Soulstice delivers in spades. Briar is the bruiser of the pair, and over the course of the adventure she gains access to various brutal weapons, such as a bow for ranged attacking and a pair of daggers for up-close-and-personal strikes. Other, less conventional weapon choices also include a barbed metal whip and a pair of handheld cannons. However, Briar’s signature weapon is the Ashen Vindicator, a special sword bestowed to Chimeras that can transform into a cruel war hammer mid-combo. While Briar’s armor remains static, currency collected via combat and exploration can be spent to upgrade each weapon with a variety of skills and combo moves. 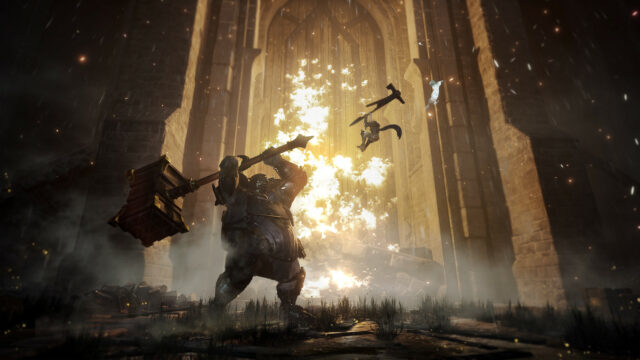 Large foes require the right means to be taken down. As the old saying goes: “The larger Briar’s weapon, the harder they fall.”

The game’s combo system is one of its greatest strengths. Dedicated players will be able to hone their mastery of the various weapons and combos through repeated practice against the game’s many enemy encounters, each of which receives immediate feedback in the form of a scoring system that assesses players’ performance based on damage dealt, time, and style. Clearing chapters also results in an overall grade, and players can revisit previously completed chapters at any time from the main menu in order to improve their rankings. Special unlockable combat challenges can also be found hidden in stages and attempted freely from the main menu, netting both glory and stat-increasing items.

It’s a real credit to the game’s battle system that it gives perfectionists robust mechanics to sink their teeth into while those with a lower affinity for action RPG mastery can still prevail more often than not through less coordinated button-mashing. That’s not to say that Soulstice is easy; there’s a strong challenge at the base recommended setting and several harder difficulties available for further replays. However, a scaled-back story mode with only a mild focus on combat also exists for those who would rather focus on the narrative being told than on aerial combos and frantic action.

One way in which the difficulty ramps up noticeably, particularly in the game’s latter half, is through enemies that can’t be harmed by conventional methods and require special tactics to dispatch. Lute provides frequent assistance during battles by shielding Briar from the occasional hit or emitting her own ghostly attacks to deal some light damage and keep enemies at bay. This is accomplished with the assistance of an on-screen button prompt that causes her to interrupt an enemy attack if pushed quickly enough. But a more direct way in which she assists Briar is by casting a dome of either red or blue spirit energy around the two of them.

This energy has a direct effect on certain enemies, weakening their natural defenses that would otherwise shield them from Briar’s attacks. However, sustaining these energy fields comes at a price, and Lute must either lower the dome after a short while to recharge or risk being temporarily stunned. It’s an interesting idea that adds a welcome extra layer to combat and enhances the level of challenge further still, particularly with tougher enemies and bosses who require juggling both energy fields, with players sometimes having to switch between fields at a moment’s notice as battles wear on. 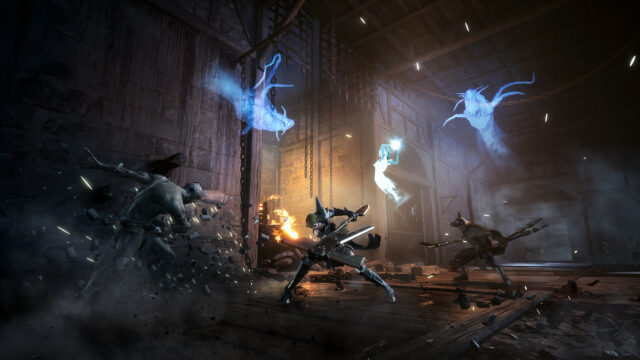 Taking advantage of Lute’s spiritual energy is key to dealing with some foes and bosses’ color-coded immunities.

The world of Soulstice has been carefully crafted, with a good deal of lore unpacked via a codex as players advance through the game. Briar and Lute have frequent run-ins with Layton, an Observer from the Order assigned to report on their progress from a distance and provide them with aid when the need arises. There are also a number of other Chimeras that have been dispatched to Ilden who figure into the quest in various ways. At several points, the pair run across locations with unusual spiritual energy, indicating something significant has recently happened. Players must make use of Lute’s heightened senses to complete a simple detective game of sorts, uncovering points of interest to gain a glimpse into what happened. It’s a welcome addition that provides breaks from the action-heavy gameplay, but could perhaps have been fleshed out more and elevated from the infrequent uses it receives here.

Much like the world design, the game’s visuals have their ups and downs. The majority of the bespoke character designs are memorable, with evident attention to detail. Briar and the other Ashen Blade members sport fierce battle armor and armaments. Bosses, too, benefit from unique designs, though the same cannot be said for the more pedestrian rank-and-file enemy troops. While environments certainly bring across Ilden’s once-grand, now-shabby state, the visuals overall don’t do much to push the envelope, with a frame rate that can dip noticeably during more frantic combat moments. Audio, however, is strong throughout, with great voiceover performances, satisfying and chonky sound effects, and a moody score that helps to sell the game’s mysterious and danger-filled atmosphere.

Soulstice is a strong entry to the action RPG market, and a great showing for its young development studio. It manages to ride a fine line of providing a considerable yet fair difficulty to players of varying skill levels while also including many options for die-hards to ratchet up the challenge far beyond what a standard campaign requires. At the same time, it establishes an intriguing new gameworld that provides a satisfying first outing while leaving the door wide open for future adventures. It may not immediately aspire to the same household-name status as some of its sources of inspiration, but fans of the genre would be hard-pressed to not find plenty to enjoy here.