Writing a review for the launch of Retro Forge’s hardcore side-scrolling action RPG Souldiers is really a “best of times, worst of times” case. On one hand, it has a lush fantasy world with brutal, unforgiving difficulty and great production values that is extremely satisfying to explore and quite easy to recommend. On the other, many players that took the plunge at launch were rewarded for their trouble with questionable optimization and even a few game-breaking bugs. Now, however, many of these concerns have been addressed (hence the month-long delay of this review), and what remains is a supremely fun and fascinating adventure that those not afraid of a good challenge are sure to get plenty of enjoyment out of.

The first few minutes of the game are not very noteworthy; to be honest, the initial story setup is kind of an old hat. Zarga is a stereotypical medieval-fantasy kingdom, engaged in a military campaign with the nation of Dadelm. On the cusp of a pivotal battle, a battalion of Zarga’s troops lies in ambush in a hidden cave, when the mountain caves in. The trapped troops are soon visited by a valkyrie, who informs them that they have, in fact, perished and must now follow her to her realm where the souls of the fallen go. Once there, players — who take on the role of an unnamed Zargan soldier — are told they must seek out the realm’s guardian. All of this happens before they’ve taken more than a handful of steps.

The narrative itself never gets particularly deep. In order to reach the guardian, the Zargan soldiers have to explore the area and deal with any troubles as they crop up, particularly once they run afoul of a race of malicious creatures who have recently begun infecting the realm’s denizens. What is surprising is how character-driven the game feels, as a good number of the cast get fleshed out over the next forty-or-so hours, which in itself is fairly lengthy for this subgenre. There are frequent scripted interactions with individual members of the battalion who will pop up in dungeons or in town, and every character starts to feel distinct and memorable. Among others, players get to know the rough-and-tumble Adamont, a mountain of a man with a fiery-red mohawk, and Makerel and Gruper, two soldiers that serve as the game’s comedic relief duo. 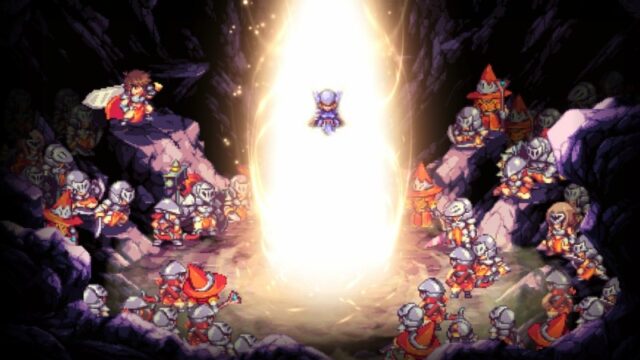 What awaits the warriors of Zarga in this new realm?

Despite its narrative being a bit on the basic end of the spectrum, Souldiers shines brightly on just about all other fronts. The bulk of the player’s time is spent engaged in challenging action combat. Right out of the gate, players are given a choice of three character classes: the melee-based scout, a bow-and-arrow archer, or the magic-using caster. Each class feels impressively unique to play, and one’s playstyle is forced to adapt to accommodate the individual abilities and shortcomings. Not only do the three classes utilize differing basic movesets, but each comes with its own skill tree, which ensures very divergent approaches to combat as well as a bit of replayability.

For combat, the designers have attempted to put emphasis on skillful offense without completely stripping away defensive options. Players have access to a dodge mechanic, though this comes with the caveat that it takes a couple of seconds to recharge before it can be used again, so thinking a few steps ahead is crucial. This means that some boss encounters, while fun to figure out, can be grueling tests, particularly on higher difficulties, while even normal enemy mobs hit hard enough to easily sap the player’s health. There’s also a block mechanic, though the associated stamina bar recharges rather slowly, making this more of a last resort. With defensive options thusly limited, the challenge lies in exploiting windows of opportunity to attack foes. Small health pickups are plentiful, especially by breaking boxes or cutting down vegetation, but the respite they provide is so slight compared to the punishment enemies can dish out that it is not a reliable path to success.

The one ace up the player’s sleeve is the fact that most enemies, including some bosses, have innate elemental weaknesses. Unlike the traditional implementation of such a system, elemental attacks in Souldiers aren’t magic-based. Instead, players earn access to new elements by progressing through the story and clearing dungeons. Air, sand, lightning, water, or wind can be added to any basic attack via a flick of the right directional stick, adding some extra oomph. This system unfortunately can be a bit finnicky on the DualSense controller; with six different affinities assigned to it, it’s far too easy to flick the right thumbstick in the wrong direction and get an element other than the one desired. It also momentarily takes the thumb off the face buttons used for jumping, dodging, and attacking. The left thumbstick is similarly sensitive, often sending the player character back through a door they had just stepped through rather than take off running, though this was more of an annoyance than an active hindrance. 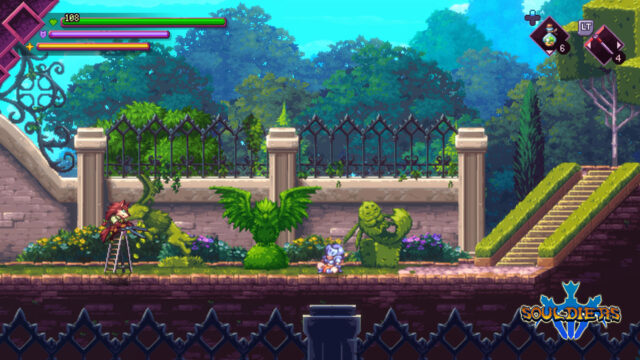 A topiary garden and an underwater lab are among the more innovative locales the game offers.

Not only do elemental affinities play into the game’s combat, but they are also used for world exploration, which is another area in which Souldiers excels. The game is essentially a Metroidvania, with plenty of side areas that are inaccessible until certain traversal abilities have been learned. Commonplace moves like a double- or wall jump are present and accounted for, but adding an elemental affinity to one’s weapon also allows for environmental manipulation. When struck by sand, special crystals cause unseen platforms to appear for a limited time, for example, and dormant robotic drones can be powered by electricity to turn into new platforming surfaces.

The platforming, in general, is very enjoyable, and really adds a considerable amount to the overall sense of exploration. Areas are huge and sprawling — the majority of dungeons, for instance, can take hours upon hours to complete — and there are myriad secret nooks and crannies tucked away all over the place. That said, platforming also doesn’t lag behind combat in terms of difficulty, and players will often be asked to perform daring, difficult maneuvers. The amount of backtracking required to fully explore each map is perhaps a bit excessive for all but the most dedicated completionists, but is a testament to the designers’ passion for their craft. A fast-travel mechanic is available from save points, with extra save points added since launch, and the game auto-saves progress at more frequent checkpoints, though the latter are temporary and don’t persist from one session to the next.

With the amount of time spent in each location — and the number of times most of them will need to be revisited — it’s a very good thing that the game looks as stunning as it does. Its pixel-art graphics are, in a word, jaw-dropping, and among the best most players are likely to find. This is no mean feat, considering Souldiers is set in a side-scrolling 2D world. The plentiful outdoor areas, in particular, are able to capitalize on the team’s artistic talents, and are marvelously vibrant, with multiple background layers that create a living, breathing world that begs to be taken in. The game’s hub, Hafin City, is an absolute feast for the eyes, with new animated sights seemingly waiting to be discovered with each new visit. It’s no stretch to say that the pretty, hand-drawn intro cinematic actually undersells what lies ahead. 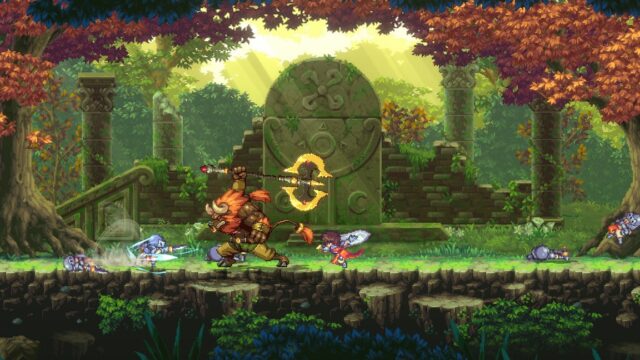 The multiple visual layers of each scene deserve to be observed in motion.

Equally as impressive is the game’s musical score. For such a lengthy game, the soundtrack does not outstay its welcome in the least. Areas have unique, catchy instrumental themes, some of which even complement the setting, like the Arabian-esque theme in the desert pyramid dungeon. Notably absent is any voice acting, though that’s hardly noticeable in light of the musical quality otherwise on display.

With everything mentioned so far, Souldiers should have been an uncontested triumph. However, it’s impossible to ignore the technical issues that have plagued the title since its launch. Far too many players’ progress has been halted by bugs, which can mean dozens of hours of playtime wasted; it seems unlikely these players will be back to give the game a second chance. Optimization was less than ideal, with frame rate drops occurring in a few particularly busy areas; even now, after many issues have been patched, some slowdown is still noticeable. Console players, especially, have had a hard go of it, having to wait markedly longer for the most egregious errors to be addressed. Those new to the fold, at least, won’t be plagued by many issues anymore, apart from the frequent but trivial spelling and grammatical mistakes in the English translation.

Where you fall on Souldiers probably depends on whether you were an early adopter. Technical issues appearing at launch were considerable, but have now largely been addressed. Those just coming to the game now, or those willing to return for a second attempt, will find a title as superbly high-quality as it is challenging. However, with great challenge comes great satisfaction, and the journey along the way is just so memorable; there were times I could literally not put the controller down, even after hours of playing. The ending does promise a sequel, and I, for one, am extremely excited about what this talented team can provide in a sophomore outing with the lessons learned here.