Legend of Zelda with a Shotgun

For the past several years, the gaming industry has experienced a surge of retro games designed to recapture the feel of classic games of the early console generations. Wastebasket Games attempts to harvest the magic of the original The Legend of Zelda for the NES by copying its formula and swapping out the sword with a shotgun. Therefore, Shotgun Legend, which was released on Steam in 2018, not only provides an effective experience mimicking the original, but adds a few extra features that even dares surpass its influence.

Players take control of Eugene, a shotgun-wielding hillbilly who discovered a rim he needed for his truck. But upon touching it, he is transported to a strange land where the rim has separated into several pieces. Knowing the rim is his only ticket home, Eugene embarks on an adventure armed with his trusty shotgun to collect the pieces that are now scattered throughout multiple dungeons. The story may sound silly, but it never takes itself seriously. As Eugene progresses throughout the dungeons, he unlocks clues to the mysteries of the rim by finding notes scattered throughout the land, which also provide hints of where to go or what to do next. The story is light – definitely not the strong point of the game – and players may often find themselves lost at where to go next. This is the 8-bit era of storytelling, the fun in discovery is mostly by trial and error.

Shotgun Legend’s combat takes the traditional top-down The Legend of Zelda style, swaps Link for a hillbilly, trades the sword for a shotgun, and gives the player unlimited ammo. Interestingly enough, this formula works wonderously. Pellets from the shotgun blasts spray wider the further they travel, so the closer the player is to the target, the more pellets will hit and cause higher damage, while being farther away results in less damage, but provides more safety with distance. Apart from the standard shotgun attack, players can cycle through various weapons after acquiring them in a dungeon. This very much resembles the Zelda series, except the bow and arrow and bombs have now become a crossbow and dynamite. And players will need these items to progress through the game, as dynamite may clear up a once-inaccessible path to the next dungeon. 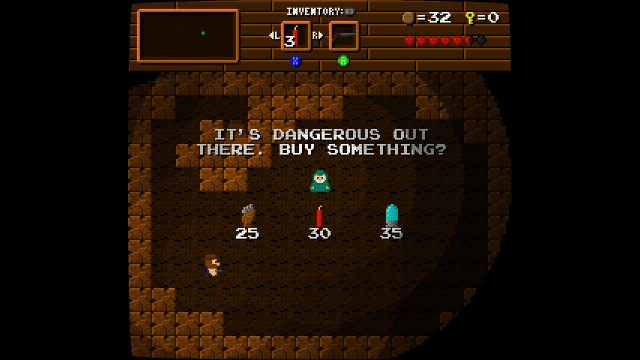 This may look familiar to some players.

The game has a high difficulty level, making the original The Legend of Zelda seem like a stroll on the beach on a clear day. The enemy AI takes a slightly more sophisticated approach compared to the 8-bit counterpart, as monsters will aim attacks and follow the player relentlessly. These enemies often require multiple hits to die whilst dishing out devastating damage in return. Enemy placement can surprise unsuspecting players, such as entering a house only to be waylaid by skeletons. Yet, despite the difficulty, the gameplay remains solid, and the enemies and bosses all have a set pattern. The primary annoyance comes in transitions to the next screen when certain enemy placements can cause the player to take some cheap shots without offering players ample opportunity to avoid them, sometimes even causing death. Despite the high likelihood of dying a lot, players can continue the journey from the last doorway, cave entrance, or stairs they had taken, so death isn’t as frustrating as it would otherwise be.

Shotgun Legend’s graphics don’t aim to impress. It mimics The Legend of Zelda in both appearance and style, looking like something released early on in the 8-bit NES’s life cycle. Of course, the pixel art has its own style of trees, grass, and sand, but unlike its influential counterpart, players can enter houses, explore a castle (that’s really a dungeon), and even a dark and misty forest that enshrouds the player in fog upon entering. Attentive players may find hidden rooms and locations by noticing certain, yet subtle cracks in walls that can be cleared away with dynamite, or a hidden forest path that can be traversed by pressing against trees that are differently coloured from the rest.

Surprisingly, the few songs present in this game are catchy and above average, though it’s not going to win any video game soundtrack awards. The overworld theme blends soothingly into the background without ever feeling repetitive. The dungeon theme provides an outstanding gloomy feel that sounds almost epic, though its loop may grate in the later dungeons, which requires a much longer time to clear, meaning players will hear the same song for that much longer. This game could have benefited from having a few extra tracks to break up the monotony. The sound effects do a sufficient job, and there’s just something immensely satisfying about hearing that shotgun blast over and over again as its pellets spray into waves of enemies. 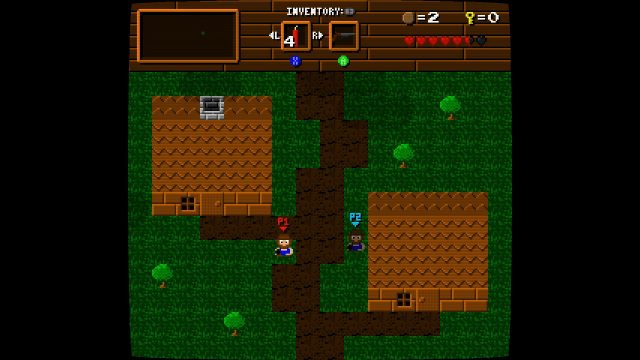 The controls are… well, they feel like an early 8-bit game. The character can move up, down, left, or right. Although this is limiting, there is a modern, quality-of-life improvement that improves the game’s pace from those old games to a degree. For instance, a push of a button allows players to cycle through the inventory and other weapons without the need to pause and highlight the desired item on the item screen. The gameplay feels sufficiently responsive, though some items found in dungeons aren’t really that useful, and most bosses can be defeated with just the shotgun. One thing to note is that later on, Eugene can dual-wield shotguns for massive added damage, which was quite the satisfying feature.

The most intriguing thing about Shotgun Legend is the two-player function, in which the second player can drop in at any time by pushing start on another controller. This adds an extra layer of depth to both the gameplay and the fun factor. This feature is not readily available as soon as the player starts, but can be unlocked by acquiring a specific item near the starting point. Unfortunately, both players share the same pool of health, so an unskilled player can easily burden the other by taking damage. The caveat to sharing health is that it avoids the issue of one person dying and having to wait on the other. Upon dying, player one will automatically restart from the last cave or dungeon entrance, and player two can merely drop in again at any time.

Shotgun Legend turned out to be a very pleasant surprise, and it definitely scratches that nostalgia itch whilst adding a nice two-player option. Classic Zelda fans looking for a good challenge will find a real gem with this game, especially when bringing a friend along for the fun. Those seeking an adventure with a substantial plot and characters may want to look elsewhere, but they would be missing out on some great gameplay if they were to ignore this game. 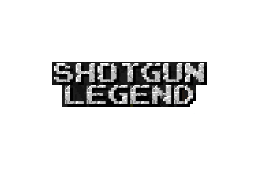